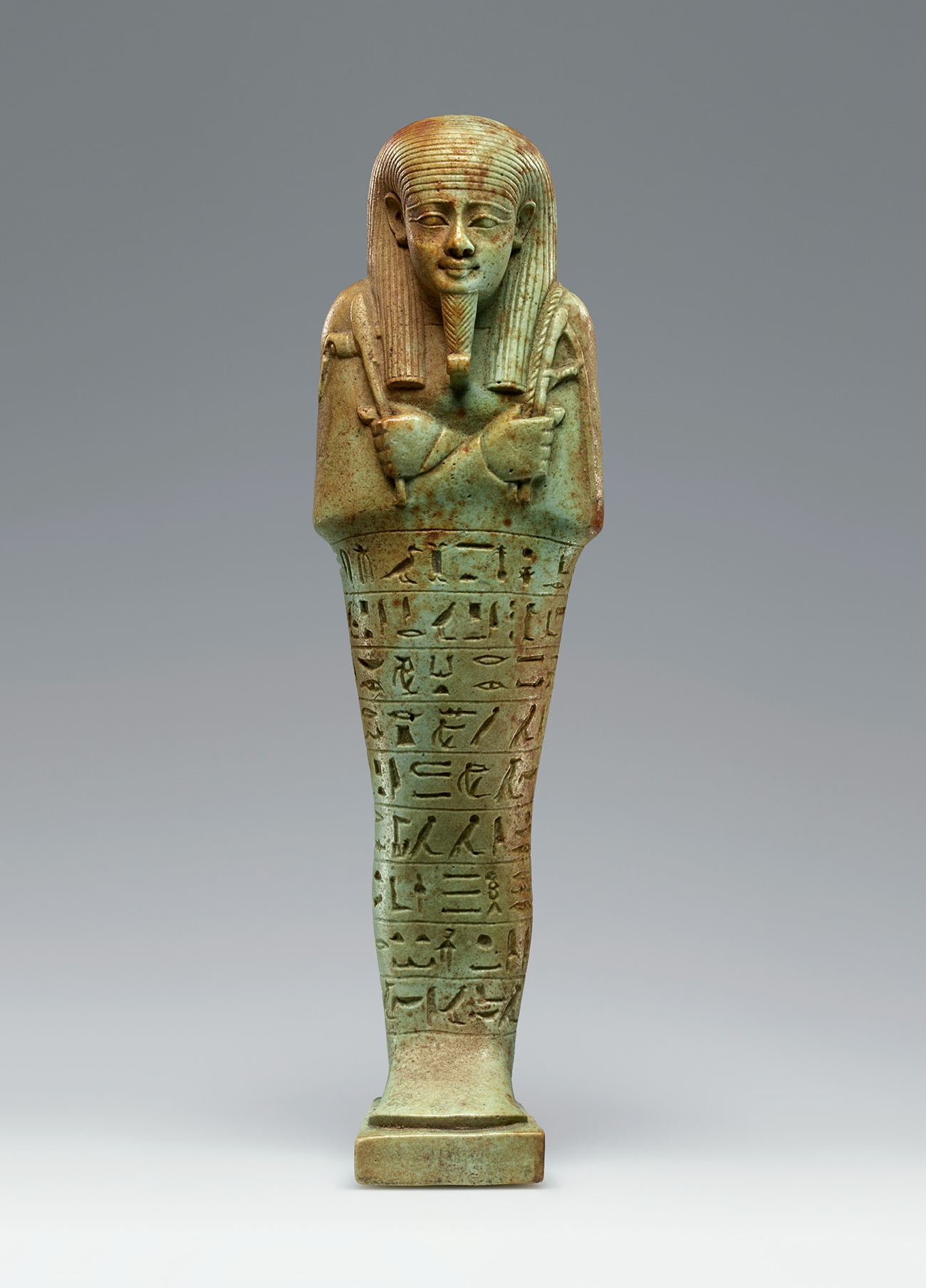 Ushabtis are figurines that were designed to be placed in someone’s tomb. Ushabtis look like human figures that have been mummified, usually with their arms crossed over their chest. Some, like the Getty’s ushabti, were very carefully made, with detailed features, while others are much simpler.

They could be made out of almost any material, including wood or clay, but the most common material for making ushabtis was called faience. Faience is a type of ceramic, but without clay, that was glazed and fired. The most common color of faience glaze was some variation of blue or green, but faience could also be many other colors, such as red, white, yellow, or black. Faience was relatively cheap and was used to make dozens of different types of objects, from vessels to jewelry, and especially ushabtis.

What were ushabtis for?

According to Egyptian beliefs, when the deceased came alive in the afterlife, the ushabtis would also come to life and would perform any menial tasks that the deceased might be asked to do. Egyptians depended heavily upon agriculture in daily life, and it was assumed that the afterlife would be similar, so most ushabtis are depicted holding agricultural tools like hoes or bags of seeds to continue this farmwork in the afterlife. To make sure the ushabti knew what to do, each figurine was usually inscribed with a short spell from the Book of the Dead. This spell was designed to bring the ushabti to life and gave the ushabti instructions for performing work on behalf of the deceased.

Part of the inscription on this ushabti says: “If there is any work to be done there in the Divine Hereafter, or if there is an obstacle there, you say as a man in his duty, ‘Look, I am here!” (trans. by Roselyn A. Campbell) Detail of the spell inscribed on the ushabti for Neferibresaneith

Ideally, an individual would be buried with an ushabti for every day of the year, but only wealthy people could afford to include this many ushabtis in their tombs. Sometimes only a few ushabtis would be included in a burial, along with other items such as furniture and clothing for the deceased to use in the afterlife.

Who was buried with this ushabti?

This particular ushabti belonged to an individual named Neferibresaneith (Nefer-eeb-ray-sah-neeth), whose name appears at the beginning of the spell on the figure. It was discovered along with 335 other ushabtis in the original burial of Neferibresaneith. Neferibresaneith was Overseer of Lower (northern) Egypt, Administrator of the Palace, and a priest, who served under King Ahmose II (c. 570–526 BCE).

Like many other ushabtis, this one holds a bag of seeds, as well as a hoe and a pick, to till the eternal fields of the afterlife. While a high official would have farmers and other laborers serving under him in the living world, in the afterlife ushabtis were provided to perform these tasks on behalf of the deceased. The ushabti for Neferibresaneith holds a hoe and a pick (left, circled) and a bag of seeds (right, circled)

Why does he have a beard?

Stylistic features of the ushabti, including the color of the faience, the shape of the seed bag, and the slight smile on the ushabti’s face, are particular to the Twenty-sixth Dynasty (c. 664–525 BCE). During this period, non-royal figures were allowed to wear the false ceremonial beard, as this ushabti does. The carefully modeled facial features and the delicate incision of the hieroglyphic text indicate that the creator was very skilled. By extension, this indicates the high status of Neferibresaneith as someone able to commission highly skilled artisans.

Provenance (Have you seen a Neferibresaneith ushabti?)

Getty’s ushabti and its 335 companion ushabtis were discovered in 1929 in Neferibresaneith’s tomb, which was carved out of the rock under a temple near the pyramid of Userkaf in Saqqara, Egypt. Ancient looters had disturbed the tomb, breaking the sarcophagus lid and removing Neferibresaneith’s mummy, but some ushabtis were preserved under a mass of carbonized wood by the sarcophagus and others were scattered in a shaft elsewhere in the tomb. It is uncommon to have this kind of context for an ushabti and to know the name of the person for whom it was made. The inscriptions on many ushabtis do not include a name, and comparatively few have a documented excavation history, so there is no way of reconstructing information about the deceased.

Neferibresaneith’s tomb and its ushabtis were excavated by the British archaeologist Cecil Firth and his team, and many of the ushabtis entered the art market soon after the excavation. Over the past eighty years, they have appeared in collections from Sweden to Cuba, and the Netherlands to India. This map shows locations where Neferibresaneith ushabtis can now be found

These ushabtis have been observed in collections on three continents, but we don’t have all of the answers about how they were dispersed; our data so far reflects a concentration on the European market. Sparse data and incomplete documentation along with a bias towards preserving, promoting, and providing access to resources and collections in Europe (or those in European languages) mean that these ushabtis are more easily found and studied.

Our previous research traced the past auction and publication histories of about a hundred members of this group, but we’re still looking for the current whereabouts of hundreds more to better understand how and when these ushabtis left Egypt, and what that can tell us about the art market for Egyptian artworks. How can you tell if you’re looking at an ushabti of Neferibresaneith? Here’s how!

These hieroglyphs make up Neferibresaneith’s name, usually located in the top line of the spell

Now that you know what Neferibresaneith’s name looks like, you can try to identify these, too. If you’ve seen a Neferibresaneith ushabti in a museum or if you know the whereabouts of others, please let us know.

Cite this page as: Judith Barr and Dr. Roselyn Campbell, "Meet an Ushabti, an Ancient Egyptian Statuette Made for the Afterlife," in Smarthistory, September 7, 2020, accessed July 2, 2022, https://smarthistory.org/ushabti-ancient-egyptian-afterlife/.