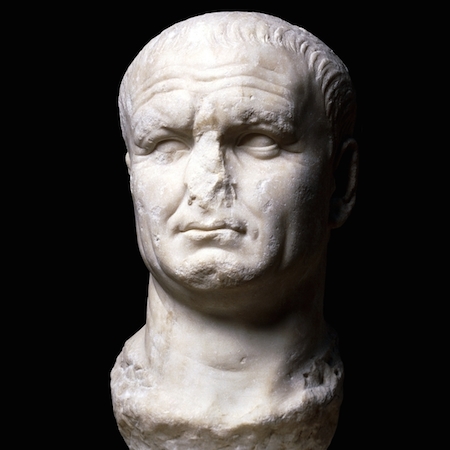 Head from a marble statue of Vespasian, 70-80 C.E., marble, 45 cm high, from Carthage, northern Africa © Trustees of the British Museum

In ancient Rome, official portraits were an extremely important way for emperors to reach out to their subjects, and their public image was defined by them. As hundreds of surviving imperial statues show, there were only three ways in which the emperor could officially be represented: in the battle dress of a general; in a toga, the Roman state civilian costume; or nude, likened to a god. These styles powerfully and effectively evoked the emperor’s role as commander-in-chief, magistrate or priest, and finally as the ultimate embodiment of divine providence.

Portrait of the emperor: A soldier and a wit

This naturalistic portrait of the emperor Vespasian (reigned 69-79 C.E.) clearly shows the lined complexion of this battle-hardened emperor, and also the curious ‘strained expression’ which the Roman writer Suetonius said he had at all times. The loss of the nose is characteristic of the damage often suffered by ancient statues, either through deliberate mutilation or through falling or being toppled from their base. 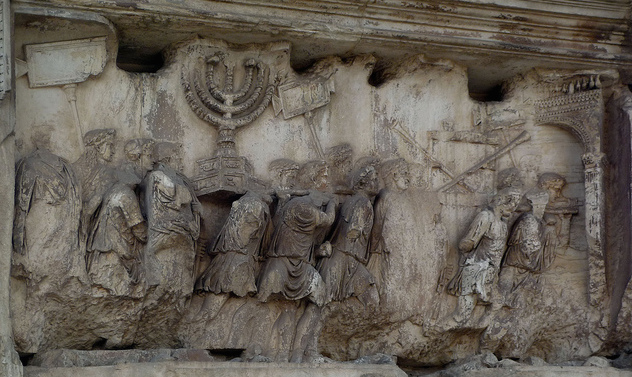 Relief depicting a triumphal procession into Rome with loot from the temple in Jerusalem, c. 81 C.E., panel in the passageway, Arch of Titus, marble, 6’-7” high, Via Sacra, Rome

Vespasian was born in the Roman town of Reate (Rieti), about forty miles (sixty-five kilometers) north-west of Rome in the Sabine Hills. Vespasian distinguished himself in military campaigns in Britain and later became a trusted aide of the emperor Nero. Together with one of his sons, Titus, Vespasian conquered Judaea in 75 C.E. and celebrated with a magnificent triumphal procession through Rome. Part of the event, in particular the displaying of the seven-branched candlestick or “Menorah” from the Temple at Jerusalem, is shown on the Arch of Titus, in Rome (above). The proceeds from the conquest of Judaea provided funds for the building of the Colosseum and other famous buildings in Rome.

Vespasian was known for his wit as well as his military skills. When, during one of his attempts to boost the treasury, Vespasian raised a tax on public urinals. Titus complained that this was below imperial dignity. Vespasian is said to have held out a handful of coins from the new tax and said “Now, do these smell any different?” Even on his death bed Vespasian’s wit did not desert him. He was perhaps parodying the idea of the deification of emperors, when he said “Oh dear, I think I’m becoming a god.”

Portrait sculptures are one of the great legacies of Roman art. Busts and statues portraying men, women and children from most ranks of society were set up in houses, tombs and public buildings throughout the Roman Empire. Sculptures of emperors and magistrates were often thought to embody personal authority, whereas many of the portraits representing private citizens were intended as memorials to the dead.

This work at The British Museum

Cite this page as: The British Museum, "Portrait of Vespasian," in Smarthistory, March 2, 2017, accessed July 2, 2022, https://smarthistory.org/portrait-of-vespasian/.