More than 4,000 years ago, Ur-Nanshe, the chief priest and king, displayed his piety and power by building a temple. Archaeologists believe that the years 2800–2350 B.C.E. in Mesopotamia saw both increased population and a drier climate. This would have increased competition between city-states which would have vied for arable land. As conflicts increased, the military leadership of temple administrators became more important. Art of this period emphasizes a new combination of piety and raw power in the representation of its leaders. In fact, the representation of human figures becomes more common and more detailed in this era.

This votive plaque, which would have been hung on the wall of a shrine through its central hole, illustrates the chief priest and king of the city-state of Lagash, Ur-Nanshe, helping to build and then commemorate the opening of a temple of Ningirsu, the patron god of his city. The plaque was excavated at Girsu. There is some evidence that Girsu was then the capital of the city-state of Lagash. The top portion of the plaque depicts Ur-Nanshe helping to bring mud bricks to the building site accompanied by his wife and sons. The bottom shows Ur-Nanshe seated at a banquet, enjoying a drink, again accompanied by his sons. In both, he wears the traditional tufted woolen skirt called the kaunakes and shows off his broad muscular chest and arms.

This sculpture at the Louvre. 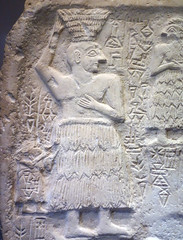 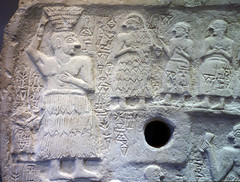 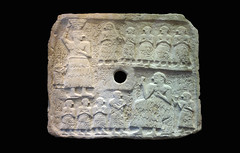 Are you a high school, college, or graduate student?

Help Smarthistory and get $25

Tell us how you use Smarthistory

Join us for a 30-minute remote feedback session, and get a $25 Amazon gift card. To sign up, fill out the form linked below, and we'll reach out to schedule.