I, Nebuchadnezzar . . . magnificently adorned them with luxurious splendor for all mankind to behold in awe.Nebuchadnezzar II, Inscription plaque of the Ishtar Gate

The chronology of Mesopotamia is complicated. Scholars refer to places (Sumer, for example) and peoples (the Babylonians), but also empires (Babylonia), and unfortunately for students of the Ancient Near East, these organizing principles do not always agree. The result is that we might, for example, speak of the very ancient Babylonians starting in the 1800s B.C.E. and then also the Neo-Babylonians more than a thousand years later. What came in between you ask? Well, quite a lot, but mostly the Kassites and the Assyrians.

The Assyrian Empire which had dominated the Near East came to an end at around 600 B.C.E. due to a number of factors including military pressure by the Medes (a pastoral mountain people, again from the Zagros mountain range), the Babylonians, and possibly also civil war. The Babylonians rose to power in the late 7th century and were heirs to the urban traditions which had long existed in southern Mesopotamia. They eventually ruled an empire as dominant in the Near East as that held by the Assyrians before them.

This period is called Neo-Babylonian (or new Babylonia) because Babylon had also risen to power earlier and became an independent city-state, most famously during the reign of King Hammurabi.

In the art of the Neo-Babylonian Empire, we see an effort to invoke the styles and iconography of the 3rd-millennium rulers of Babylonia. In fact, one Neo-Babylonian king, Nabonidus, found a statue of Sargon of Akkad, set it in a temple and provided it with regular offerings. The Neo-Babylonians are most famous for their architecture, notably at their capital city, Babylon. Nebuchadnezzar II largely rebuilt this ancient city including its walls and seven gates. It is also during this era that Nebuchadnezzar II purportedly built the “Hanging Gardens of Babylon” for his wife because she missed the gardens of her homeland in Media (modern day Iran). Though mentioned by ancient Greek and Roman writers, the “Hanging Gardens” may, in fact, be legendary. The Ishtar Gate (today in the Pergamon Museum in Berlin) was the most elaborate of the inner city gates constructed in Babylon in antiquity. The whole gate was covered in lapis lazuli glazed bricks which would have rendered the façade with a jewel-like shine.  Alternating rows of lion and cattle march in a relief procession across the gleaming blue surface of the gate.

The Ishtar Gate at the Pergamon Museum in Berlin. 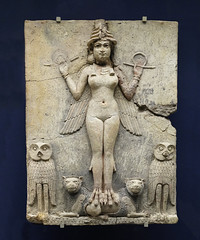 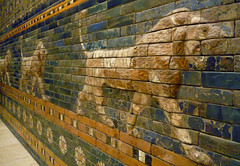 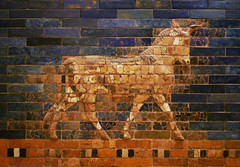 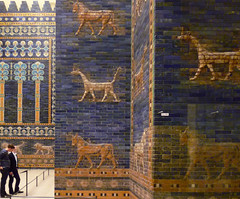 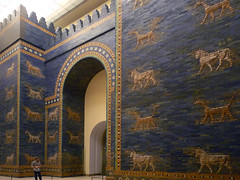 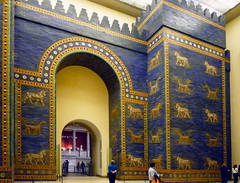 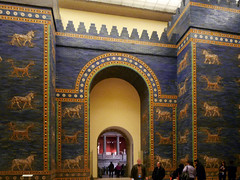 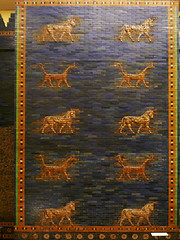 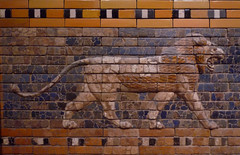 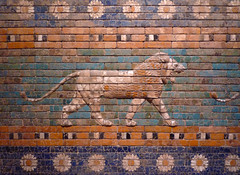 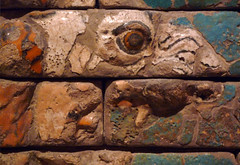 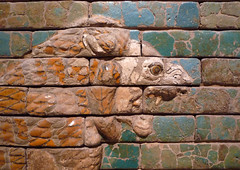 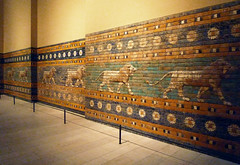