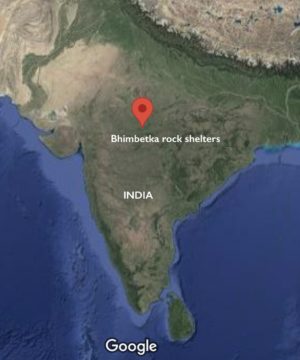 The earliest of these illustrate scenes from the lives of hunter-gatherers of the Upper Paleolithic and Mesolithic periods—a time when many animals were yet to be domesticated, humans were nomadic, and collective civilizations were not yet in existence. Evidence suggests that the most densely painted caves allowed in more sunlight and were typically uninhabited. This also supports the widely accepted belief that these paintings were not meant to beautify or decorate humans’ living spaces. The fact that many of these cave paintings overlap—implying that the rocks were painted on repeatedly and across successive historical time periods—has allowed archaeologists to assess their historicity. The Bhimbetka paintings have been classified into nine phases under three broad cultural periods: Phases I–V in the Mesolithic period, Phase VI in the Chalcolithic period and Phases VII–IX in the Historic period. Some scholars further suggest that the paintings could even have originated around 40,000 B.C.E. or earlier. Based on considerable archaeological evidence, it is suggested that there is a clear distinction between the cave paintings from the Mesolithic and Historic periods and those from the Upper Paleolithic period and later medieval period, which are fewer in number and less significant, as they do not subscribe to a distinct style, as seen in the drawings from the Mesolithic and Historical periods. 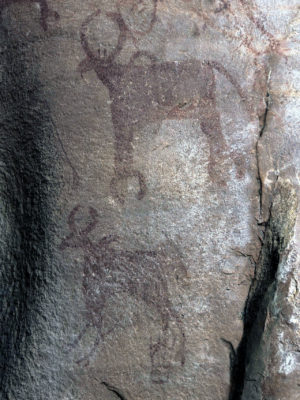 Early Bhimbetka paintings predominantly feature wild animals such as gaur, a native variety of wild ox, deer such as the chital, monkeys, wild boars, stags, and elephants as well as hunting scenes in which humans are depicted with bows and arrows and headgear. There are also depictions of different types of scenes, including ritual practices, women digging out rats from holes, and men and women foraging for fruits and honey.

Contemporary scholars have categorized the painted animal figures in these illustrations into natural, geometric, or abstract styles based on whether they are simple outlines, partially filled-in or silhouetted figures. For instance, several pregnant animals painted with visible markers such as enlarged stomachs are outlined and drawn using naturalistic or geometric styles. Sometimes, instead of being colored, the body of an animal is filled-in with another animal, suggesting a more conceptual style. For instance, some paintings depict an elephant painted within the outline of a deer, which could suggest a fantastical and possibly humorous approach to depicting subjects. 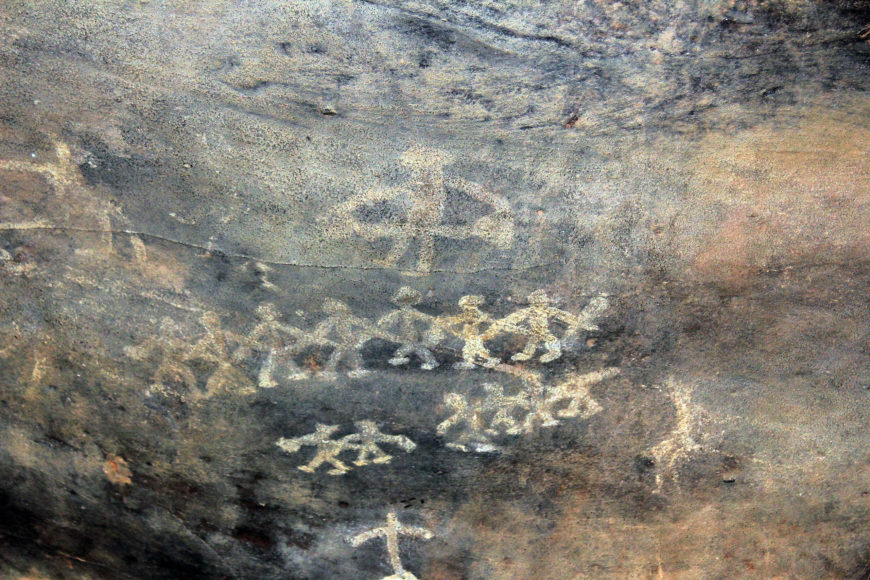 In contrast, later paintings from the Historic period onwards depict processions, scenes of warriors with swords, shields, and daggers and collective rituals. These paintings are characterized by a marked absence of animal figures, which are disproportionately drawn whenever they do appear. It has also been suggested that the motifs used in some of these later paintings reveal the religious influence of Hinduism or Buddhism.

In some, there are clear depictions of gods such as Ganesha and Shiva, representations of the Mother Goddess and symbols such as the trishul and swastika.

Archaeologists have been able to differentiate these paintings from the earlier, more faded paintings underneath through processes such as radiocarbon dating and other methods. By this time, humans were no longer living in caves as hunter-gatherers but were in the early stages of civilization and a sedentary life with domesticated animals. Also known as Bhimbetka Shelter III F-19 and Bull Rock, this rock shelter derives its name from its depiction of a large, boar-like creature and is prominent among the hundreds of structures that comprise the Bhimbetka cave paintings. The animal depicted in the painting has a large head, horns and what appears to be fur on its back. It appears to be charging leftwards, towards two figures—a human and a crab. The painting is rendered in deep red, which is believed to have been obtained from hematite, and is known for its magnitude, which is over 1.2 meters tall and .87 meters wide.

Unlike the other hunting scenes depicted in the Bhimbetka rock shelters, the scene illustrated at Boar rock depicts a human figure being attacked by, and fleeing, a wild animal. While paintings of boars appear in several other instances in the region, scholars believe that the animal at Boar Rock is mythical and seems to be a combination of a boar, an ox, and an elephant.

To produce these paintings—especially the earlier iterations—brushes were most likely made from twigs that were chewed to soften and discard the fibers. Additionally, fingers, bird feathers, and animal hair are believed to have been used as brushes. Pigments for different colors may have been obtained from vegetables or from surrounding sedimentary rocks. Hydrated iron oxides from rocks were likely used to make shades of ochre and red and burnt to produce colors such as yellow, rust orange, and brown. Bird droppings or plant sap may have been used for whites. Evidence suggests that colors were only used in the wet form—by mixing pigments with oils and water—and never in solid or powdered form.

The first works of art in the region

Scholars believe that the Bhimbetka cave paintings were quite mature and advanced for their time and were probably not the first works of art created by human beings in the region. Although the purposes of these paintings are unknown, they provide immense historical information about humans, their relationship with animals and nature, the stages of Prehistoric hunter-gathering, and the eventual transition into more sedentary civilizations with domesticated animals.

The Bhimbetka rock shelters were marked as a UNESCO World Heritage Site in 2003.