Known by the name he adopted in his late thirties, Zheng Sixiao painted Ink Orchid to evoke his sentiments at a tumultuous time in Chinese history. 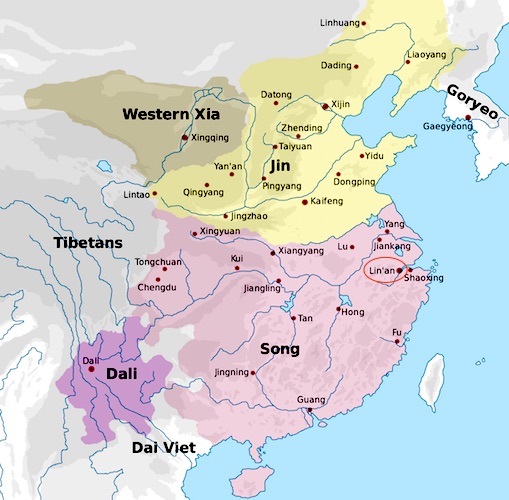 Zheng was a student of the Imperial Academy of the Southern Song. He was considered one of the literati, or the educated elite. In 1279, the Mongolian armies conquered the Southern Song empire. Zheng, a patriot, went to Suzhou (just north of Lin’an) where he lived the life of a hermit. The fall of the Southern Song prompted Zheng to rename himself. Indeed it was a common practice for literati to bestow on themselves several names. Zheng renamed himself Zheng Sixiao. Sixiao implied “remember the Zhao.” Zhao was the family name of the Song imperial family. The character for xiao 肖 was the same as the right side of the Chinese character for the word zhao 趙.

Zheng’s patriotism was also demonstrated in his choice of another name for himself. He signed this painting Suo-nan-weng, which means southern-facing old man. He was so patriotic that he never lay or sat facing to the north—where the Mongolian capital was located. Zheng was also given the courtesy name of Yiweng, meaning old man who reminisced about the fallen dynasty. 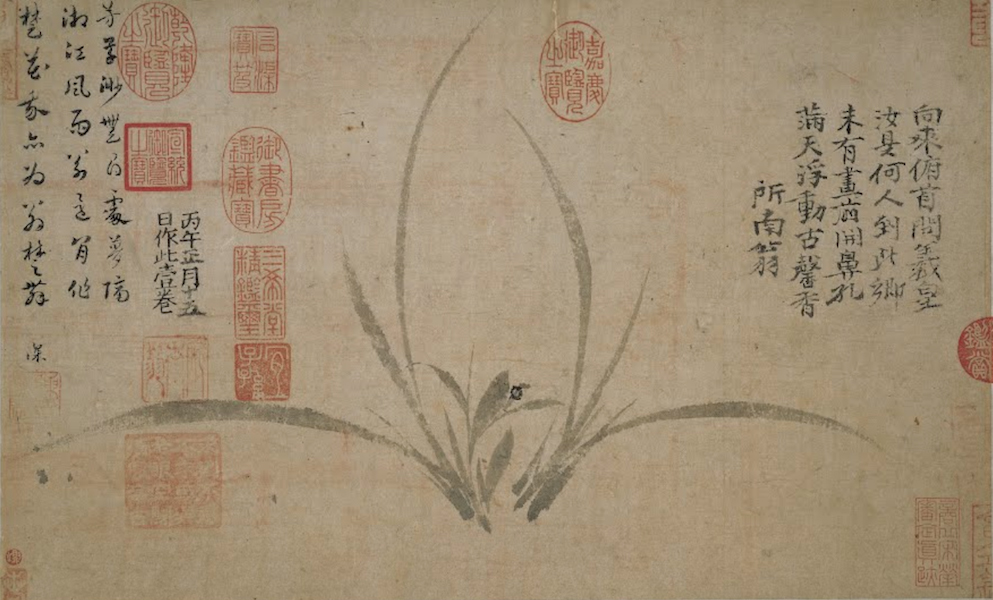 The orchid, the blossoming plum, the bamboo and the chrysanthemum each embodied traditional Chinese virtues. Known as the “Four Gentlemen,” the four plants were depicted by literati in different dynasties. The orchid with a faint, delicate fragrance grew in hidden and secluded places. Thus, the orchid can embody the characteristics of self-containment, reservation, simplicity, solitude and unpretentiousness. The description could also be used to describe how Zheng depicted himself. In Zheng’s Ink Orchid, there are no eye-catching colors or meticulous details. Precise calligraphic strokes rendered the simple and balanced composition. Zheng’s strokes depicted a few leaves and two orchid flowers. The deft use of brush and ink brings perspective, vitality and movement to the leaves and flowers. Unlike many western still life flower paintings, the ink orchid has no vase or basket.

There is also no depiction of roots. The orchid seems to float in the air. When people enquired as to why Zheng depicted it so, he was reported to have replied, “Don’t you know that the soil was stolen by the barbarians?” The rootlessness of the orchid added to the symbolism, for it connoted that Zheng was also without a home with the collapse of the Southern Song. Zheng became a yimin, a leftover subject. The rootless orchid was a personal statement of his refusal to serve the Yuan Mongolian court—a court ruled by the foreigners.

The inscriptions and seals

Zheng wrote a poem to the right of the orchid (fig. a), which expressed his bitterness at the fall of the Song. He compared himself to the orchid, emphasizing its faint, everlasting fragrance. He signed the poem with his pseudonym “South-facing Old Man” ( (fig. b). When he put the year and date, he denied the legitimacy of the Yuan dynasty by not noting its reign period (fig. c). 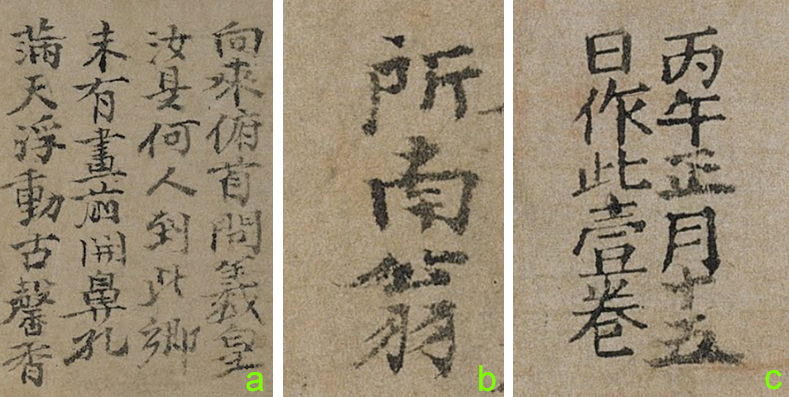 Zheng stamped two of his seals on the painting. One seal was his pseudonym matched with his signature (fig. d) while another was a longer text with four vertical lines starting from the right (fig. e). The latter hinted that he would not paint for the Yuan officials even if they asked. It was almost thirty years after the Song collapsed that Zheng painted the piece, yet all of these components signaled his remembrance of and unyielding loyalty to the Song and his enduring resistance to the Yuan.

Voids in the painting

When the painting was first created, it consisted merely of the orchid, the poem inscription at the right, the year and date indicated at the left and two of the seals at the lower left. In other words, the ink orchid exists in a void. The other inscriptions and seals were added by later literati and connoisseurs.

Leaving the background empty added great strength to the artwork. In the painting, the substance and the void complement each other. The void is not nothingness, but a space for imagination. Without details in the background, it also allows us to focus on the subject matter and inscription.

The rootless orchid lends insights into Zheng’s artistic skills and philosophy as well as aspects of his life. While conveying a strong statement by Zheng, the painting did not arouse anger or hatred but a sense of quietness. It elegantly embodied the modesty and integrity of this reclusive literati. Many subsequent literati appreciated and respected Zheng’s temperament and his depiction of the rootless orchid.