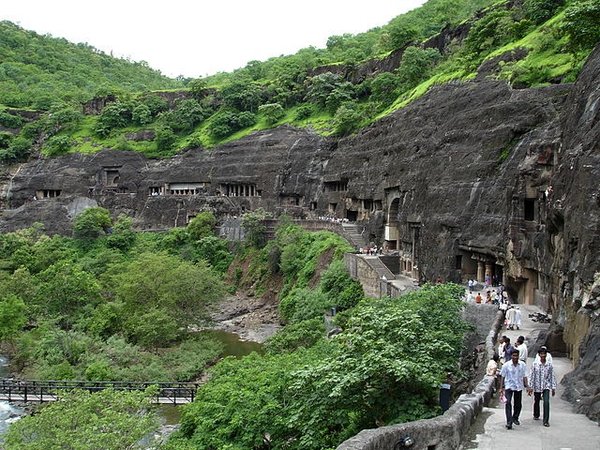 Hidden away in the hills of northwest India, some 200 miles from the busy streets of Mumbai, emerges a magnificent jewel of art and religion: the Ajanta Caves. 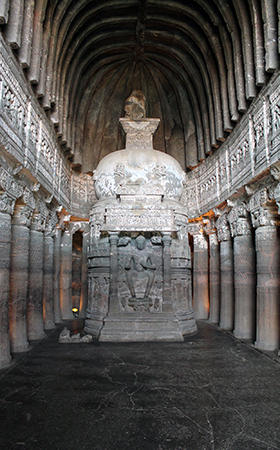 The caves, cut into the face of a mountain, form a horseshoe shape around the Wangorah River. They are an example of one of Indian’s unique artistic traditions known as rock cut temples. Ajanta consists of thirty caves, each dedicated to the life of the Buddha.

Each cave is filled with sculpture, wall murals, and ceiling paintings. Though much of this site has collapsed, what remains at Ajanta has allowed a glimpse into the artistic traditions of ancient India.

The caves at Ajanta date from the second century B.C.E. to 650 C.E. and were cut into the mountainside in two distinct phases. Discovered by chance in 1819 by British soldiers on a hunt, the Ajanta Caves have become an icon of ancient Indian art, and have influenced subsequent artists and styles. The caves at the site are not numbered chronologically. Instead, their numbering is based on location, beginning with cave 1 on the north side of the horseshoe. All of the caves at Ajanta fall into the category of Vihara (monasteries with residence halls), or Chaitya-grihas (sanctuaries/stupa monument halls). Nevertheless, each cave has its own unique characteristics, making it difficult to write about Ajanta as a whole. 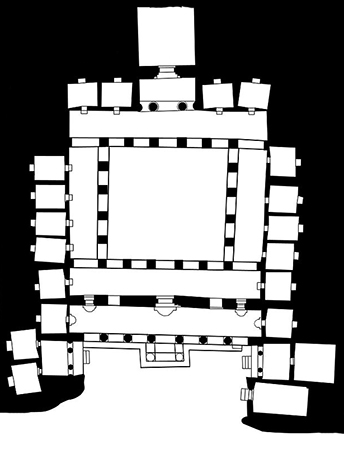 The Ajanta caves are engulfed in darkness. In fact, this lack of light is crucial to the experience at Ajanta; demanding the viewer’s time while intensifying a sense of the mysterious. There may have been dim artificial lighting created by oil lamps in the past. However, even today, the majority of the caves remain almost completely dark and without the help of artificial lighting, the caves remain in their original state.

Cave 1 is a magnificently painted Vihara (monastery), filled with wall murals, sculptures, and ceiling paintings, that date back to the fifth century. Originally, Cave 1 also had a porch which led to the main hall, however it has since collapsed.

​The main hall of Cave 1 is a square in plan, with aisles along all four sides. Adjacent to these aisles are doorways leading to fourteen small chambers. Cave 1 contains twenty painted and carved pillars. Above the pillars are reliefs depicting tales from the life of Buddha (Jatakas). Located at the rear of the hall is a large shrine of the Buddha. The walls were originally covered in paintings, but today there are only nine surviving images, the most famous being the Bodhisattva Padmapani (Padmapani in Sanskrit literally translates into “one who holds the lotus”). 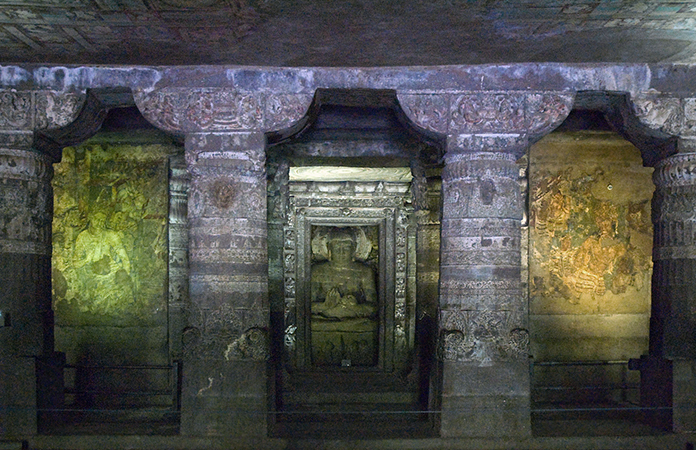 View to the rear of Cave 1 with the Bodhisattva Padmapani to the left of the Buddha Shrine (photo: Christian Luczanits, CC: BY-SA 3.0)

This painting can be found to the left on the main shrine. It depicts one of the most beloved bodhisattvas, Avalokitesvara. The term “bodhisattva” refers to a person that has been awakened by the Buddhist spirit. According to Mahayana doctrine, Alavokitesvara postponed his ascension into Buddhahood until he assisted every being in achieving Nirvana. Avalokitesvara takes the largest numbers of forms across Asia. Originally, a masculine form, Avalokitesvara is also known as the feminine Guanyin in China, and Kuan Yin in Japan. 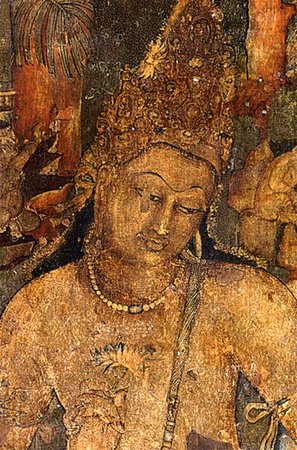 In the painting, his tan body, darkened only by the locks of curly hair, is delicate and elegant. He is adorned with pearls, amythyst, and other attributes of traditional Indian jewelry. On his head sits a magnificent crown, which at some point was most likely colored in extreme detail, but over time has faded. His eyes are lowered in a meditative state. His calm, spiritual face sets the tone and mood of the room. In his right hand, he holds a lotus blossom, which may represent his spiritual awakening.

If you look up from the beautiful wall paintings you see the geometric designs and motifs that adorn the ceiling. There are also images of peacocks, subtly decorated in blue paint made from lapis lazuli. One of the panels shows a decorative vegetable motif that looks similar to our modern day green bell pepper. In addition to this, there is a creature with a bull’s head whose body transforms into swirling curvaceous lines that blend into the floral decoration of the next panel. 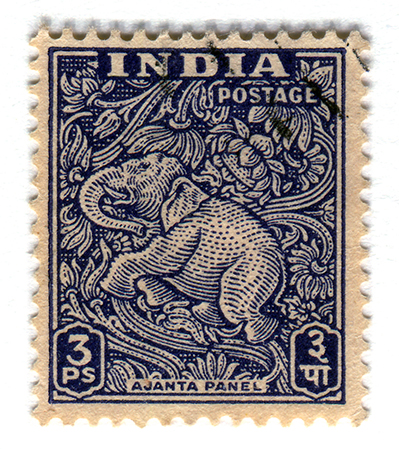 The ceiling paintings are so beautiful that one of the panels, which depicts a running elephant surrounded by flowers, was chosen as the official logo of India’s Department of Tourism. The elephant is shown playfully galloping, as his trunk swirls close to his body.

The painting techniques at Ajanta are similar to European fresco technique. The primary difference is that the layer of plaster was dry when it was painted. First, a rough plaster of clay, cow dung, and rice husks were pressed on to the rough cave walls. This was then coated with lime paste in order to create a smooth working surface. The dark outlines of the figures were then added followed by a pallete of only 6 colors. The pigments the artists used came from natural resources: red and yellow ocher, crushed green malachite, blue lapis lazuli, etc. 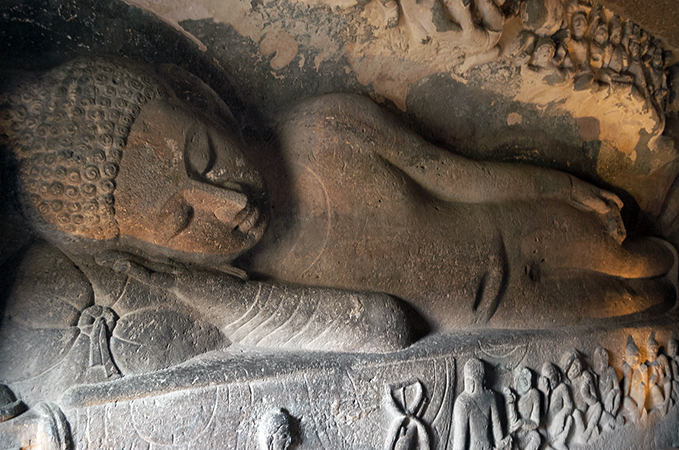 In 1983, UNESCO World Heritage Centre selected the Ajanta Caves to be a part of their preservation endeavors. Today, the caves at Ajanta remain one of the most visited architectural sites in India. They are a living representation of one of the grandest artistic styles in Indian art and history.