Cave 323 and the history of Buddhism in China

Official historical records indicate that Buddhism first arrived in China during Eastern Han Emperor Ming’s rule (57–75 C.E.). Emperor Ming saw a golden figure in his dreams, and the next morning, he asked his ministers who it was. They surmised that the figure must have been the reputed Buddha from the west. 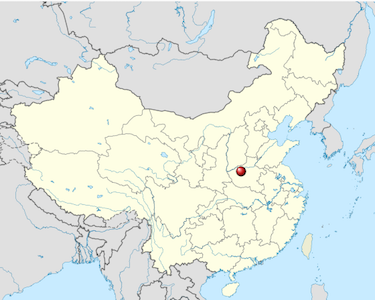 Location of the Longmen caves in China

Thus in 68 C.E., the emperor sent Official Cai Yin from the capital, Luoyang, to the west. Three years later Cai Yin returned to Luoyang after journeying to India, bringing back with him Buddhist art and scriptures along with two Buddhist monks to preach in China.

Soon after Cai Yin’s return, a Buddhist community began to grow in Luoyang. About three hundred years later, rulers ordered the carving out and decoration of the caves today known as the Longmen Grottoes. Today, the Longmen Grottoes of Luoyang are one of the three most important Buddhist grottoes in China, along with the Mogao Caves of Dunhuang and the Yungang Grottoes of Datong. They tell a series of narratives arranged in chronological order.

Though many historians mark Cai Yin’s return from India as the official entrance of Buddhism into China, Chinese Buddhists prefer to emphasize that Buddhism appeared in China even earlier.

Mogao Cave 323 at Dunhuang tells one such version of the origins of Chinese Buddhism. Cut in the Tang dynasty in the 7th century, Cave 323 is a product of  a great increase in powerful Buddhist patronage by rulers such as Empress Wu Zetian and Emperor Wuzong. During this expansion in Chinese Buddhism, Buddhist historical paintings began to appear in places such as the Mogao Grottoes. The mural on the north wall in Cave 323 specifically references a legend that describes Emperor Wu worshipping two metal statues after winning a war against the Xiongnu. Delighted with his spoils of war and wanting to know more about the deities that the statues represented, Emperor Wu sent Zhang Qian to the Western Regions. Thus Zhang Qian journeyed to the west and returned to China with information that the statues were of the Buddha. This legend helps to explain the early origins of Buddhism in China.

Besides the legend of the metal statues, there exists another story about Emperor Wu’s westward expansion. Following one of his military victories, Emperor Wu came into possession of a special breed of horse from Central Asia. We don’t see these horses in the wall paintings though. These special horses were from Ferghana, and truly magnificent (likely related to the Akhal-Teke horses of today). According to the legends, they sweat blood—in Chinese, they’re still referred to as “汗血马 (hanxuema),” or “sweat-blood horses.” This bronze sculpture, known as “the Heavenly Horse from the West,” takes its name from the first line in Emperor Wu’s ode:

The heavenly horses have arrived from the Western frontier
Having traveled 10,000 li, they arrive with great virtue
With loyal spirit, they defeat foreign nations
And crossing the deserts all barbarians succumb in their wake!
The Shiji, Ch. 24, “The Treatise on Music” from the Digital Silk Road Project

On your way to Dunhuang from Lanzhou, considering stopping by the Gansu Provincial Museum to take a peek at the Heavenly Horse from the West, otherwise known as the Flying Horse. Detail of Emperor Wu on a horse sending off Zhang Qian who is kneeling, north wall fresco in Mogao Cave 323, Early Tang dynasty (image courtesy of the Dunhuang Academy)

Whether or not Zhang Qian ever really journeyed to learn about Buddhism for Emperor Wu, he did go on at least one dangerous mission to the west that lasted twenty years. Although he never succeeded in forming a political alliance to combat the Xiongnu, his journey trail-blazed a route for political, economic, and cultural exchange between China and the Western Regions.

These routes that would completely reshape the history of world civilization became known as the Silk Road.

Other stories in Cave 323

Besides the Zhang Qian legend on the origins of Chinese Buddhism, the wall paintings in Cave 323 depict other stories. Though not directly related to the two metal Buddha statues in Emperor Wu’s possession, the fresco on the south wall of Cave 323 relates another early tale of Chinese Buddhism involving two statues. Two Stone Buddhas Floating on the River on the south wall of Mogao Cave 323, Tang Dynasty (image courtesy of the Dunhuang Academy)

In 323 C.E., two stone statues were found floating in a river in southern China. When Daoists tried to welcome the statues, they were stopped by a storm. As depicted in the painting, when the Buddhists arrived, the weather became favorable and the statues approached the shore to be carried to town to be worshipped.

In 326 C.E., a bronze statue of the Buddha seated on a lotus was discovered in southeast China, in present-day Yangzhou. When townspeople placed the statue in an ox-cart to head towards town, the ox stopped in front of a monastery. According to the Sanskrit inscription on the back of the lotus, the statue was made by the fourth daughter of the great Indian king who converted to Buddhism, Asoka. This story is depicted across multiple scenes on the south wall of the cave. Discovery of a Bronze Image of the Buddha on the south wall of Mogao Cave 323, Tang Dynasty (image courtesy of the Dunhuang Academy) The center of the mural at Dunhuang depicting this scene was removed by American explorer and archaeologist Langdon Warner in 1924. It is now in the Sackler Collection at the Harvard Art Museums. The removed scene shows eight men ferrying the bronze statue of the Buddha to shore, to be placed in the ox cart. Reconstruction of the Bronze Image of the Buddha Mural on the south wall of Mogao Cave 323, Dunhuang, including the Harvard segment

Here is a reconstruction of how the section might have appeared in the original mural.

The Sui dynasty’s first emperor, Emperor Wen (who ruled from 581–604 C.E.), grew up in a Buddhist monastery and ruled as one of Buddhism’s greatest public advocates. In this mural, Emperor Wen sits as a disciple in the center left with his palms pressed together, listening to the Master Tan Yan deliver a dharma talk, or a public discourse on Buddhism. He sits on a purple rug, with his courtiers on the rug behind him. The details of his headdress and long sleeves —along with the fact that he is alone—indicate his imperial status.

Emperor Wen’s presence is a powerful indication of the support and patronage that Buddhism enjoyed during his reign, a period likely within living memory when Cave 323 was constructed in the early Tang dynasty.

Asia Society on the Belief Systems Along the Silk Road

The Dunhuang Academy on Cave 323