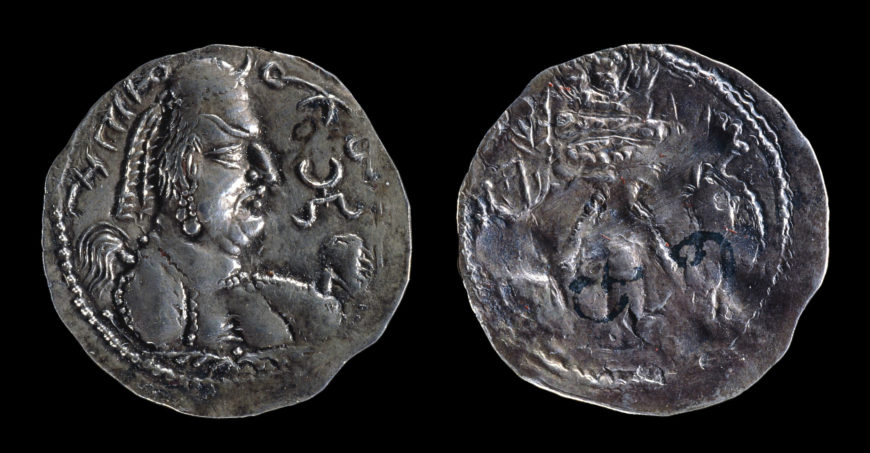 The Huns invaded the former Sasanian and Kushan territories in Afghanistan and north-west Pakistan, as far south as the Punjab, in the fifth century. They produced imitations of the local coinages in the lands they conquered. This coin imitates the designs of Sasanian coins and has a Bactrian inscription giving the name Alchon. This is thought by some scholars to be the tribe to which the Hun ruler Khingila (about 440–90) belonged. The distinctive elongated head is customary on portraits of the Hun rulers, who appear to have practiced cranial deformation in this period. The diademed bust of the king rests on a palm spray and faces a monogram. The plumes issuing from the king’s shoulders are probably intended to represent the flame motif used by earlier Kushan and Kushano-Sasanian kings as a divine sign of the right to rule. On the reverse is a fire altar surmounted by a bust and flanked by two attendants.

This coin and 13 other Hun examples, over 200 Sasanian silver coins and 5 gold Byzantine imitations, were all found in the relic deposit of the Tope Kelan stupa, one of the principal Buddhist cult monuments at Hadda, south of Jalalabad. The Sasanian and Byzantine coins in the deposit provide a date of the late fifth century for the foundation of the stupa and also for the coins of these little-known Hun rulers of Afghanistan.

Cite this page as: The British Museum, "Silver dinar of the Alchon Huns," in Smarthistory, May 24, 2021, accessed February 4, 2023, https://smarthistory.org/silver-dinar-of-the-alchon-huns/.