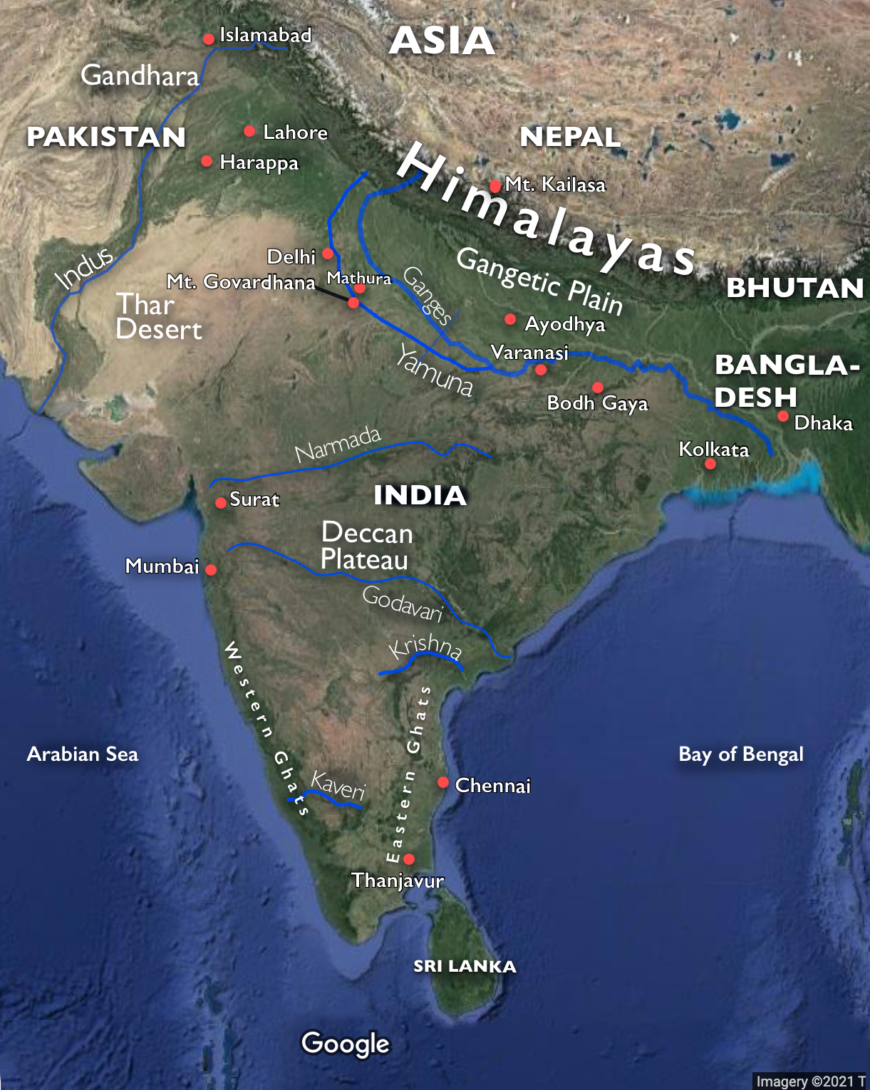 Understanding geography is particularly important for the study of art of South Asia, not only because the topography of the region is so diverse, but also because, for many who live on the subcontinent, the landscape itself is considered to be sacred and often appears as a main subject in works of art. Today, the region of South Asia can include the nation-states of Afghanistan, Bangladesh, Bhutan, India, Nepal, Pakistan, Sri Lanka and the Maldives. Scholars also use the term “Indian subcontinent” to refer to the broader region of mainland South Asia and the countries that comprise the geographic formation that dominates this southern part of Asia. Historically, the term “India” (or Hindustan) was used by people living outside this region to refer to the land beyond the Indus River. 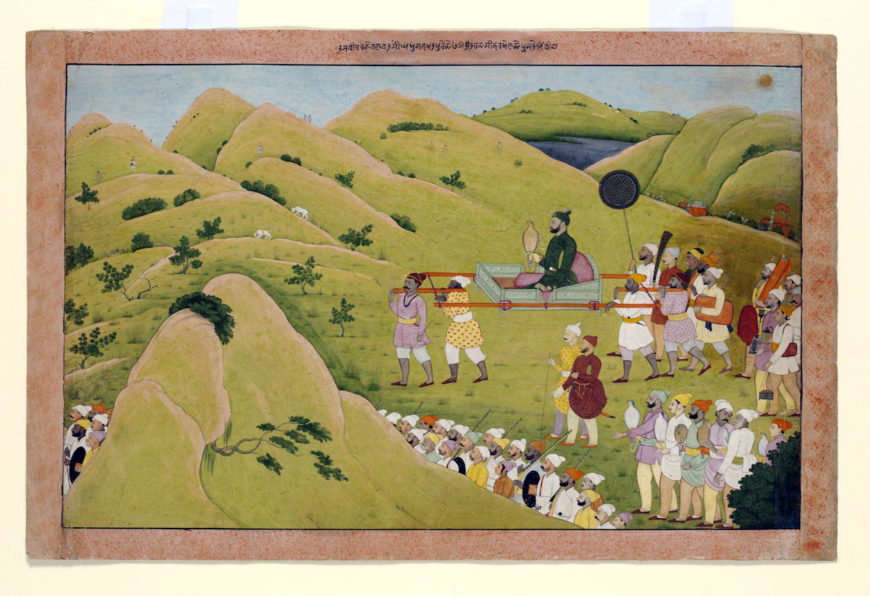 Studying the geography of South Asia can also be a way to better understand the people who created or commissioned works of art. In addition, maps and depictions of landscapes can provide insight into transitions of political power, the territorial desires of rulers, as well as the places where artists lived and worked. Contemporary maps of the Indian subcontinent often utilize satellite images and focus on geo-political boundaries. But these contemporary maps are only one perspective of the geography of South Asia. Map of the subcontinent showing how it was divided between 1700–1792, made during the period of British colonial rule in 1923 for William R. Shepherd, Historical Atlas (New York: Henry Holt and Company, 1923) (source)

A Google map of South Asia captured today looks quite different from a map of the subcontinent made during the period of British colonial rule, reminding us that countries (such as Bangladesh) or states (like Chhattisgarh, Telangana, and Uttarakhand in India) were formed within the last several decades. Early depictions of the geography of South Asia, such as allegorical paintings produced under Mughal patronage, suggest the importance of visually connecting the body of a ruler with a particular geographical territory. There are also visually complex maps of specific locations in South Asia that speak to the cultural potency of certain landscapes and the desire to visualize large urban centers and sacred pilgrimage sites. The geography of South Asia has also been politicized in more recent years, as in this c. 1920–30s advertisement that depicts the nationalist goddess Hind Devi (more popularly known as Bharat Mata or Mother India) as an embodiment of a map, with the goddess’ pink and gold sari flowing beyond her body to create the cartographic shape of India. Map-Shawl (a pictorial map of Srinagar, a city in the disputed region of Kashmir, north of India), third quarter of 19th century, made in Kashmir, wool embroidered with woolen thread, 90 x 78 inches (V&A). This was never intended to be worn and was likely commissioned by Maharaja Ranbir Singh of Jammu and Kashmir as a gift for Queen Victoria.

One useful approach for understanding the geography of South Asia is to consider topographical regions that create natural boundaries and areas of cultural affiliation, even when those regions overlap or defy contemporary geo-political borders. Approaching geography in this way reinforces shared cultural traditions in South Asia and highlights linkages between artistic practices across this diverse space. One of the most famous rivers in South Asia is the Ganges River, which runs along the northern and eastern regions of the Indian subcontinent just below the Himalayan mountain range. The fertile land on either side of the Ganges River is known as the Gangetic Plain. This large region has long been home to important cities, artistic sites, and cultural activity. The Gangetic Plain encompasses present-day Bangladesh, parts of Nepal and Bhutan, as well as areas within the  states of Bihar, Jharkhand, Odisha, Uttar Pradesh, and West Bengal in India.

Another important river in South Asia, the Indus River, has also been a center for cultural activity for millennia. The Indus begins in the high mountains of western Tibet then flows down through Kashmir as well as through the Khyber Pakhtunkhwa (KPK), Punjab, and Sindh provinces in Pakistan, ultimately emptying into the Arabian Sea, just south of the city of Karachi.

These two rivers—the Indus and the Ganges—and their surrounding landscape form an area known as the Indo-Gangetic Plain, which crosses the northern part of the Indian subcontinent and includes both its northeastern and northwestern regions. The Deccan Plateau is a large triangular plateau of basalt and granite that rises between the coastal mountain ranges of the Western Ghats and the Eastern Ghats, just below the Vindhya mountains. The Deccan Plateau crosses the border of several states in India including Andhra Pradesh, Karnataka, Kerala, Maharashtra, Tamil Nadu, and Telangana. Historically, this region was home to important kingdoms whose rulers were great patrons of art and architecture. The Deccan is also a significant area for agriculture and responsible for producing a variety of goods including grains and cotton. Today, some of the largest cities in India are in the Deccan, including Bangalore, Hyderabad, and Pune. The Deccan Plateau, along with its coastal boundaries (the Coromandel Coast on the east and the Malabar Coast on the west), encompass the entire southern region of the Indian subcontinent.

Between the Gangetic Plain (to the north and east), the Vindhya mountains (to the south), and the Indus River valley (to the west) is a small, but important region that includes the states of Chattisgarh, Gujarat, Haryana, Himachal Pradesh, Madhya Pradesh, Punjab, Rajasthan, and Uttarakhand in India. This northern and western region of the subcontinent has long been home to important artistic and cultural centers, including those of the great Rajput chiefs who were major patrons of art and architecture.

Understanding the geography of South Asia has never been a straight-forward task. Geo-political borders can be sources of tension, even violence, in South Asia today and often obscure shared artistic practices that cross or disrupt boundaries of contemporary nation-states. As historians and students of South Asian art it is helpful to remember that many borders are new, and that people of the past had very different conceptions of their home and their place within the world. Furthermore, while understanding geography is important for the study of South Asia, it provides only one perspective from which to explore the diverse visual and material culture from this region.