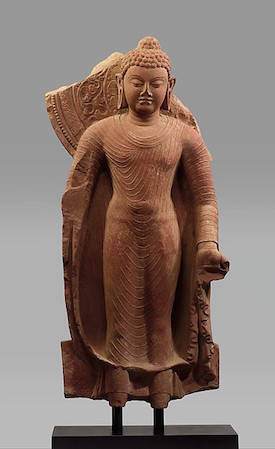 When we talk about the religion that worships the Buddha, we refer to it as singular: Buddhism. However, it may be more accurate to talk about “Buddhisms.” The religion that originated in India took on so many different forms and adapted in such a variety ways that it is often difficult to see how the various sects of Buddhism are related. What do they all have in common? The worship of the Buddha, of course! But who was Buddha? Was Buddha a man or a god? In early forms of Buddhism, Buddha is most definitely a man. As the religion changes and adapts, the Buddha is deified.

Buddhism originated in what is today modern India, where it grew into an organized religion practiced by monks, nuns, and lay people. Its beliefs were written down forming a large canon. Buddhist images were also devised to be worshiped in sacred spaces. From India, Buddhism spread throughout Asia. 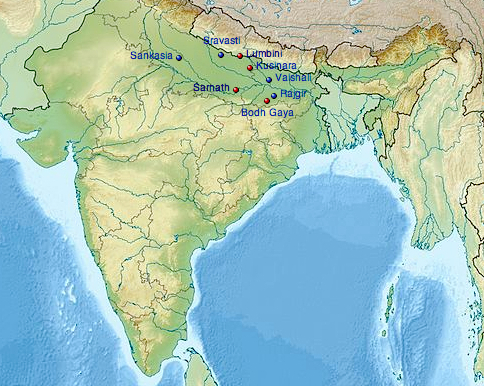 In order to appreciate the magnitude of the Buddha’s achievement, we should try to imagine what life was like in early India, particularly in towns and villages of the Ganges River Valley—like Kapilavastu in the foothills of the Himalayan mountains—in what is now the country of Nepal. This is the area in which the Buddha was likely born, in about 560 B.C.E. Every year the river flooded the valley destroying crops. Monsoons came every year too, creating famine. There were also severe droughts and disease such as dysentery and cholera.

The Brahmanas (the Hindu priests) chanted the Vedic hymns (the oldest scriptures of Hinduism) and offered fire sacrifices to Brahma (the Hindu god of creation). However, they did not improve conditions for the common man. From the earliest times, Hindu society was stratified. Castes were firmly established in the economy with the Brahmanas the creators and perpetuators of a social order highly favorable to themselves. 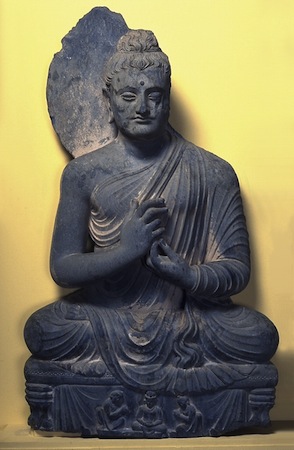 One of the Buddha’s greatest spiritual accomplishments was the doctrine of the Middle Way. He discovered the doctrine of the Middle Way only after he lived as an ascetic for some time. This experience convinced him that one should shun extremes. One should avoid the pursuit of worldly desires on the one hand and severe, ascetic discipline on the other. Despite his doubts about existing religious practices, and his strong sense of mission, he did not think of himself as the creator of a new religion. Rather, he felt the need to purify the religion of his day.

Buddha took for granted the truth of cosmological perspectives indigenous to the Indus valley—the worldview that is often associated with Hindu conceptions. One must understand what time and space look like in the Buddhist framework of ancient India. This framework was shared by all, whether one was an adherent of Brahmanism, Jainism, or Buddhism.

Samsara (a Sanskrit word) literally means a “round” or a “cycle.” In the ancient Indian worldview this means the endless cycle of rebirth and death—there is no beginning and no end. This endless cycle is governed by karma (causality).

In ancient India, time is measured in kalpa. There is an unending cycle of Destruction, Rubble, Renovation, and Duration. Each period is 20 kalpa long and they are thought of as a circle.

Destruction: Has a great beginning, but gets progressively worse. There are scourges of fire, water, wind.

Rubble: Space is dark and empty, only wind exists in this stage, with seeds of karma.

Renovation: This is the phase when things build up from the bottom.

Whirling wind forms a disk of water. Impurities float to the top and form a disk of metal. This disk breaks down and forms the earth.

Duration: This is the phase of preservation, and at the end of this phase, sentient beings appear. 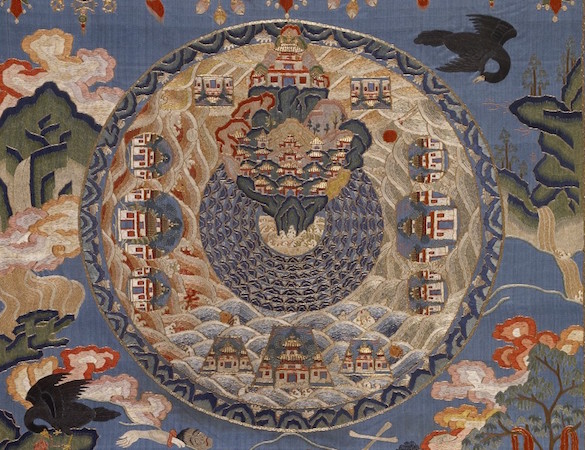 Mount Sumeru (or Meru) is the cosmic axis—that is, the link between heaven and earth. The Mountain is the center of the world in this cosmological conception, both physically and in terms of importance. On top of Mount Sumeru are the palaces of the Gods. Mount Sumeru is surrounded by seven chains of mountains and an ocean that has four continents: North = rectangle; West = circle; South = trapezoid (Jambudvipa, where humans live); East = crescent moon.

The Universe is vertically structured. At the top is the realm of “no form.” This realm has no qualities that can be perceived by the senses. It is impossible to have a conception of it. Next are the realms of form that can be perceived in various states of meditation. One can see pleasant sights, bright light, and perceive coolness.

Below is the realm of desire. This realm has six levels. This is our realm. The six levels are the six paths of rebirth. The highest realm is that of the gods (deva). Halfway between gods and humans are demi-gods (asura). Humans and animals dwell on the surface of Jambudvipa. Hungry ghosts inhabit the shadow world below the animals. This level has much pain and suffering. Beings here are always hungry and never satiated. Hell beings occupy the lowest level. There are 8 levels within this level. At the eighth and lowest level there is no rest between tortures.

How do people (beings) move about in this world? The answer is karma. Karma is the law that regulates all life in samsara. Existence in time and space is ruled by karma. Karma means action or deed. Every action has a result. Every deed has an effect. Karma is a built-in universe scale for good and evil—good leads to good result and vice versa. Karma governs the long-term and the short-term. Karma is never destroyed. In the short term good deeds lead to a good result and bad deeds lead to a bad result. Karma transgresses from one life to another. It determines how a being will be reborn (higher or lower). Karma is not predestination because the concept of predestination does not take into account free will. Your current circumstances are determined by deed in your previous life, but between the present and the future there is free will. Upward mobility is possible.

What are the implications of the Buddhist world view? Being reborn a human is rare and important—rare especially in the time of Buddha. Buddha is born only in a small time period within the phase of destruction. We are fortunate to have access to his teachings since there is limited time and place to be given the chance to encounter Buddha. A being can only encounter Buddha and benefit in the human realm. 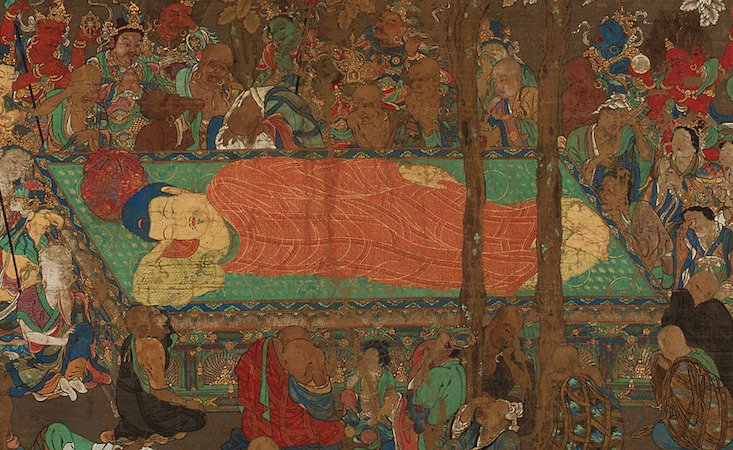 How does one achieve salvation? All is impermanent. All is cyclical. All is painful. Even Gods suffer. They are only gods for one lifetime and then they are reborn lower down. Also Gods do not have access to Buddha. Beings need to find a way out of the endless cycle of rebirth. The goal is Nirvana. Nirvana is extinction. Nirvana is the traditional name for that which is not samsara. Where is Nirvana? Nowhere. Nirvana is outside the vertical concept of the universe.