The Jōmon period is Japan’s Neolithic period. People obtained food by gathering, fishing, and hunting and often migrated to cooler or warmer areas as a result of shifts in climate. In Japanese, jōmon means “cord pattern,” which refers to the technique of decorating Jōmon-period pottery.

As in most Neolithic cultures around the world, pots were made by hand. Vessels would be built from the bottom up from coils of wet clay, mixed with other materials such as mica and crushed shells. The pots were then smoothed both inside and out and decorated with geometric patterns. The decoration was achieved by pressing cords on the malleable surface of the still moist clay body. Pots were left to dry completely before being fired at a low temperature (most likely, just reaching 900 degrees Celsius) in an outdoor fire pit.

Later in the Jōmon period, vessels presented ever more complex decoration, made through shallow incisions into the wet clay, and were even colored with natural pigments. Jōmon-period cord-marked pottery illustrates the remarkable skill and aesthetic sense of the people who produced them, as well as stylistic diversity of wares from different regions. 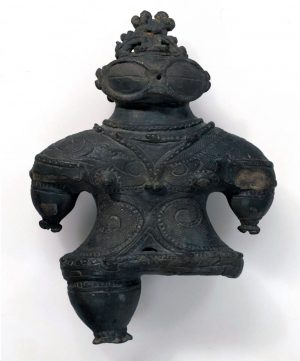 Also from the Jōmon period, clay figurines have been found that are known in Japanese as dogū. These typically represent female figures with exaggerated features such as wide or goggled eyes, tiny waists, protruding hips, and sometimes large abdomens suggestive of pregnancy. They are unique to this period, as their production ceased by the 3rd century B.C.E. Their strong association with fertility and mysterious markings “tattooed” onto their clay bodies suggest their potential use in spiritual rituals, perhaps as effigies or images of goddesses. Besides dogū, this period also saw the production of phallic stone objects, which may have been a part of the same fertility rituals and beliefs.

Images of the female body as symbols of fertility are encountered in many parts of the world in the Neolithic period, presenting features unique to the regions and cultures that produced them. The preoccupation with fertility was increasingly twofold, namely the fertility of women and that of the land, as people began cultivating it and transitioning to a settled agricultural society.