Japanese two-dimensional works of art can take a number of different formats—printed books (ehon), single- or multi-sheet prints (hanga), paintings in the form of hanging-scrolls (kakemono) and handscrolls (emaki), moveable folding screens (byōbu), usually in pairs, sliding door paintings (fusuma-e) and smaller scale fan paintings and album leaves. The screens and sliding doors also served to exclude draughts or divide rooms, and were changed according to the season. Hanging-scrolls were displayed, sometimes in pairs or sets of three in the tokonoma (ceremonial alcoves) of reception rooms of mansions and, again, could be changed according to the season, or to honor a special visitor. All such works were viewed seated at floor level on tatami mats. 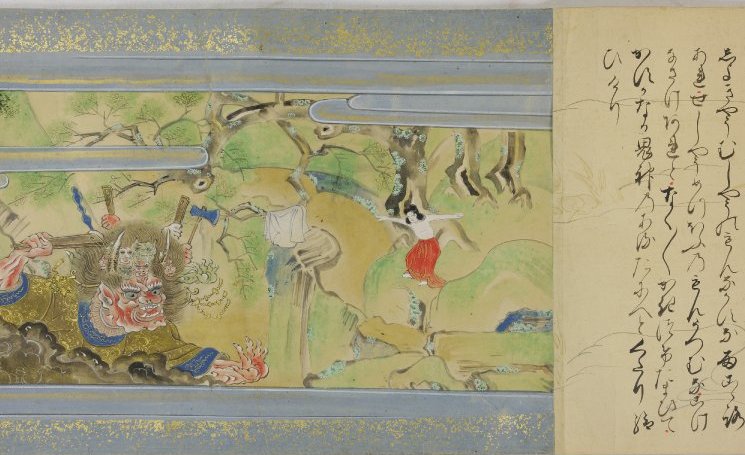 Shaka no honji (The Story of Sakyamuni), from a set of three hand scrolls, ink and color on paper, 17th-18th century, 32.9 x 1703.4 cm, Tosa School, Edo Period, Japan © The Trustees of the British Museum. The story, which evolved in medieval Japan, interweaves the basic religious message of the life of Prince Siddhartha Gautama through his enlightenment to become the Buddha Shakyamuni (Japanese: Shaka), with the more human story of his relationship to his mother Queen Maya. In this scene he gains enlightenment.

Handscrolls (like the one above) were usually placed on a low table and unrolled from right to left to show a narrative story or seasonal sequence. Print series, small-scale paintings or fan paintings were often mounted in albums. Individual prints, especially the Ukiyo-e portraits of popular actors or courtesans, might be pasted to a screen. The size of the print was limited by the size of cherry-wood block available. Often two, three or more sheets were arranged side by side to depict a wider scene. Books were printed two pages to one sheet of paper, which was then folded, and the sheets sewn together at the spine with a plain cover.

Kakemono (hanging scrolls) were originally used to display Buddhist paintings, and calligraphy. The painting in ink and colors on either silk or paper was backed with paper and given silk borders chosen to harmonize with the painting. Finally, a roller was affixed to the bottom. Scrolls were kept in specially made paulownia wooden boxes to protect them from dust, changing climate conditions and insect damage. 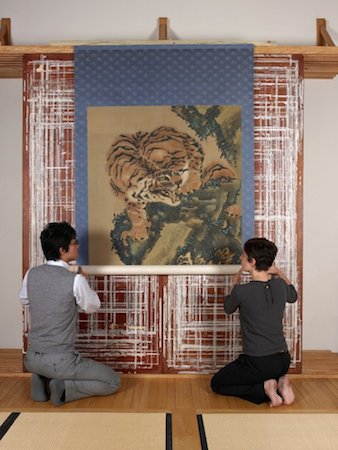 Cite this page as: The British Museum, "Japanese art: the formats of two-dimensional works," in Smarthistory, March 1, 2017, accessed February 5, 2023, https://smarthistory.org/japanese-art-the-formats-of-two-dimensional-works/.