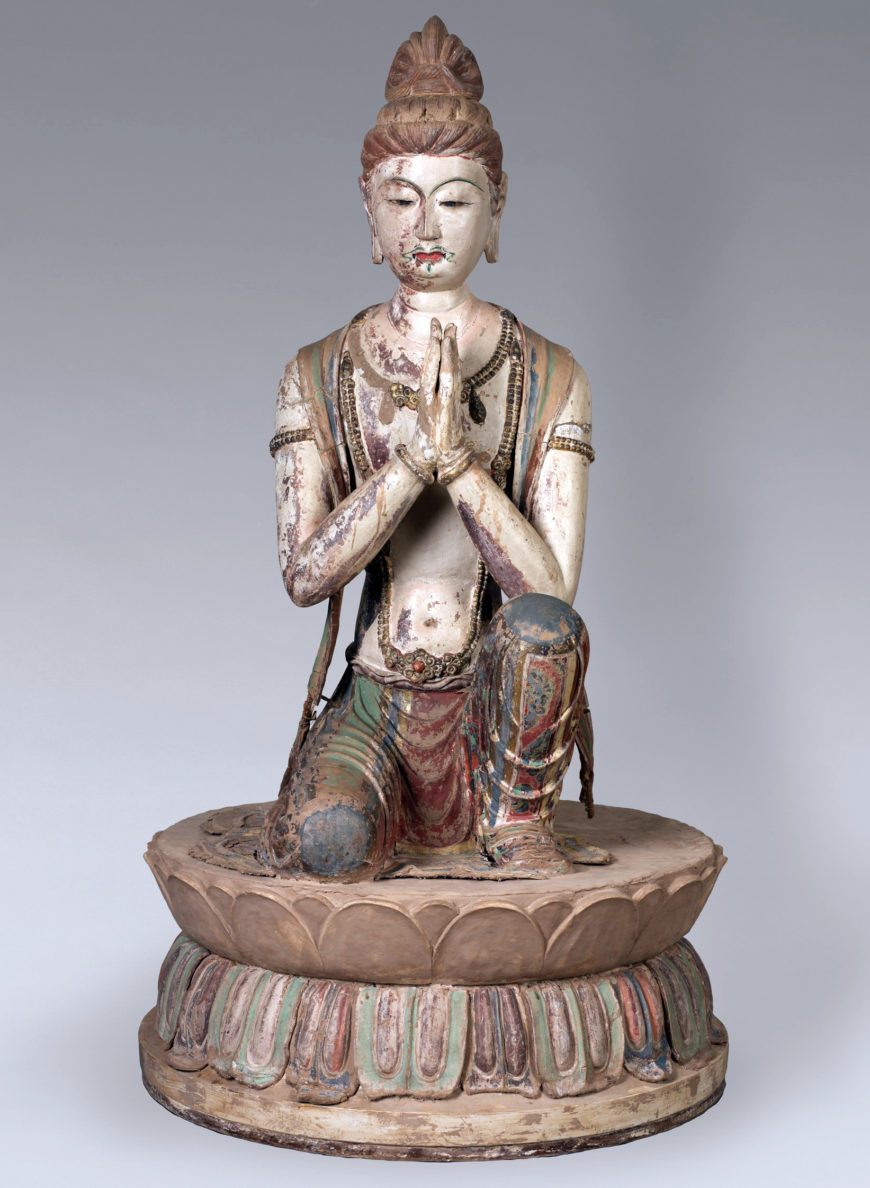 What is a bodhisattva?

In Sanskrit, bodhisattva roughly means: “being who intends to become a buddha.”

In the Theravada tradition of Buddhism, the Buddha referred to himself as bodhisattva during all of his incarnations and lifetimes before he achieved enlightenment. It was only after he achieved buddhahood that it became proper to refer to him as the Buddha.

In the Mahayana tradition of Buddhism, a bodhisattva is any being who intends to achieve enlightenment and buddhahood.

[…] Western literature often describes the bodhisattva as someone who postpones his enlightenment in order to save all beings from suffering […] by choosing this longer course, he perfects himself over many lifetimes in order to achieve the superior enlightenment of a buddha at a point in the far-distant future […]The Princeton Dictionary of Buddhism, edited by Robert E. Buswell and Donald S. Lopez, p. 134.

In Buddhist artistic traditions, there are many archetypal bodhisattva figures who appear repeatedly. In this essay we will look at five of them.

These specific bodhisattva figures may be depicted as either male or female, depending on the geographic context and the iconographic traditions of that culture. 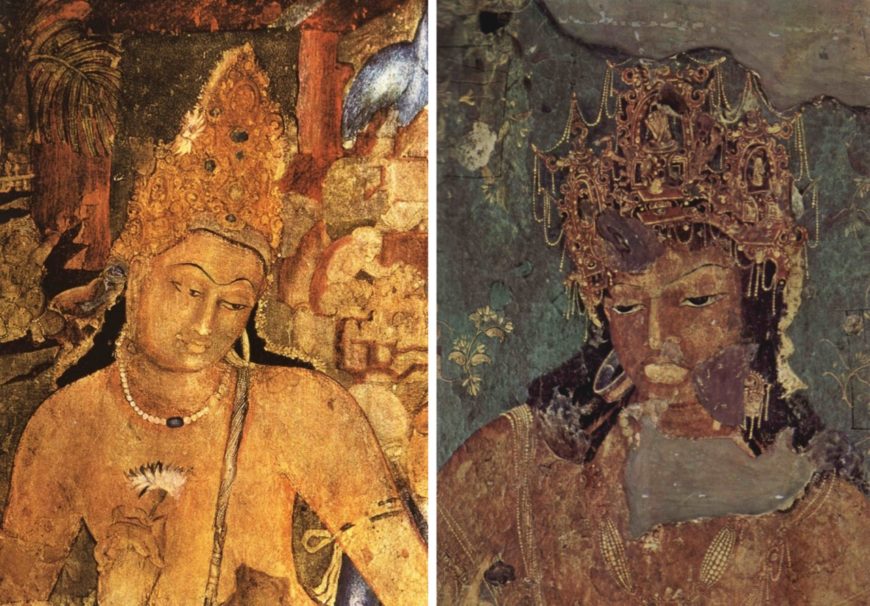 Paintings of two archetypal bodhisattva figures are found in the Ajanta Caves in Maharashta, India. These figures flank a statue of the Buddha. The one on the left is named Padmapani, and the one to the right is named Vajrapani. Another artwork from Indonesia features the same theme. The Buddha sits in the center flanked by the two bodhisattvas: Padmapani on the left and Vajrapani on the right.

Padmapani is another name in Sanskrit for Bodhisattva Avalokitesvara, who represents the compassion of all of the Buddhas. Guanyin, also known as the Bodhisattva Avalokitesvara, or “The Perceiver of Sounds,” Mogao Cave 57 at Dunhuang, China (photo: Dunhuang Academy)

The Bodhisattva Vajrapani represents the power of all the Buddhas, and he protects the Buddha. Below he is depicted wielding a lightning-bolt scepter in his left hand. 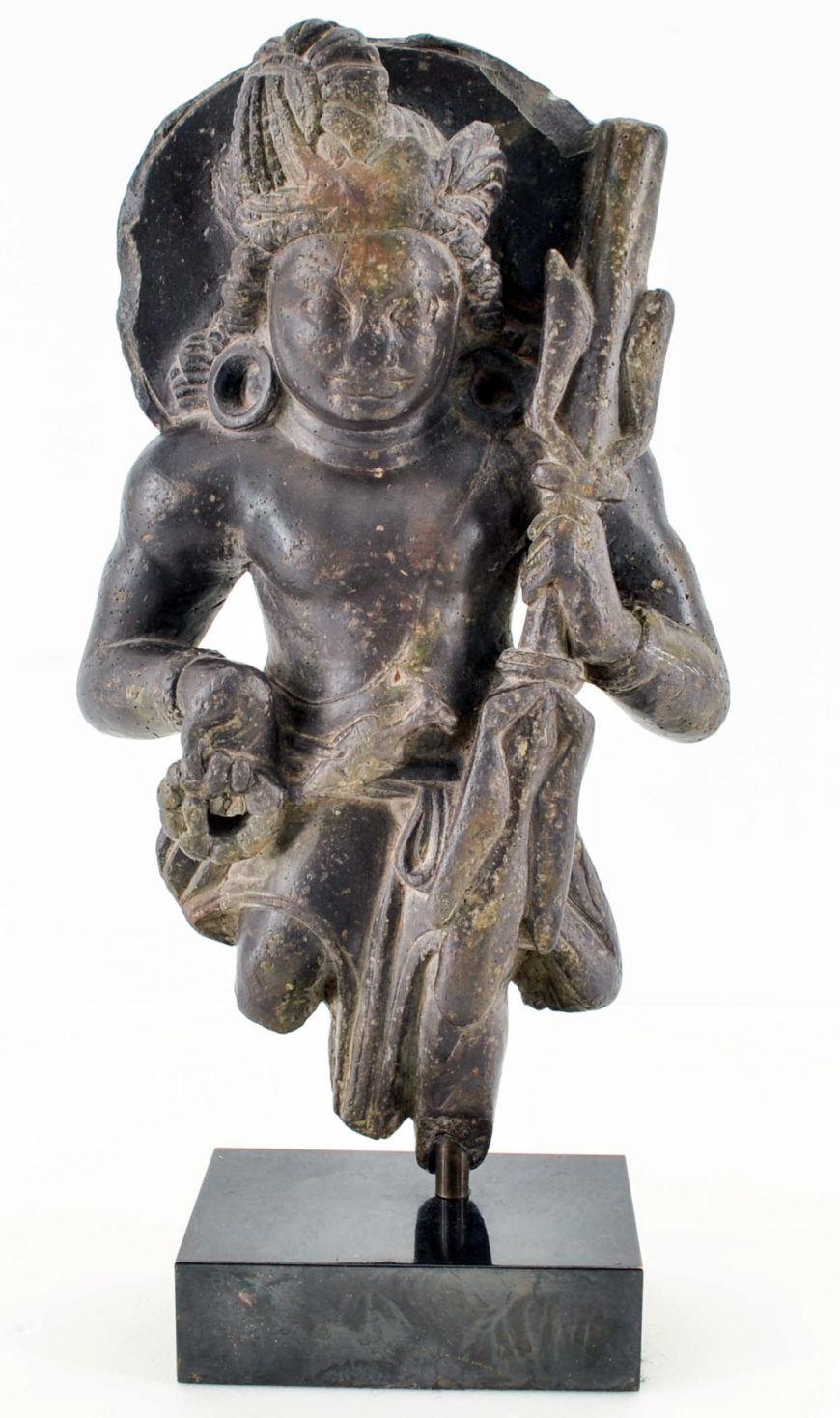 Thanks to cultural contact between the Kushan Empire and what is today northern India, the Bodhisattva Vajrapani has a strong iconographical relationship with the Greek mythological figure of Hercules as found in Gandharan art.

Besides the bodhisattvas Padmapani and Vajrapani, another pair of popular archetypal bodhisattvas are Manjusri and Samantabhadra. 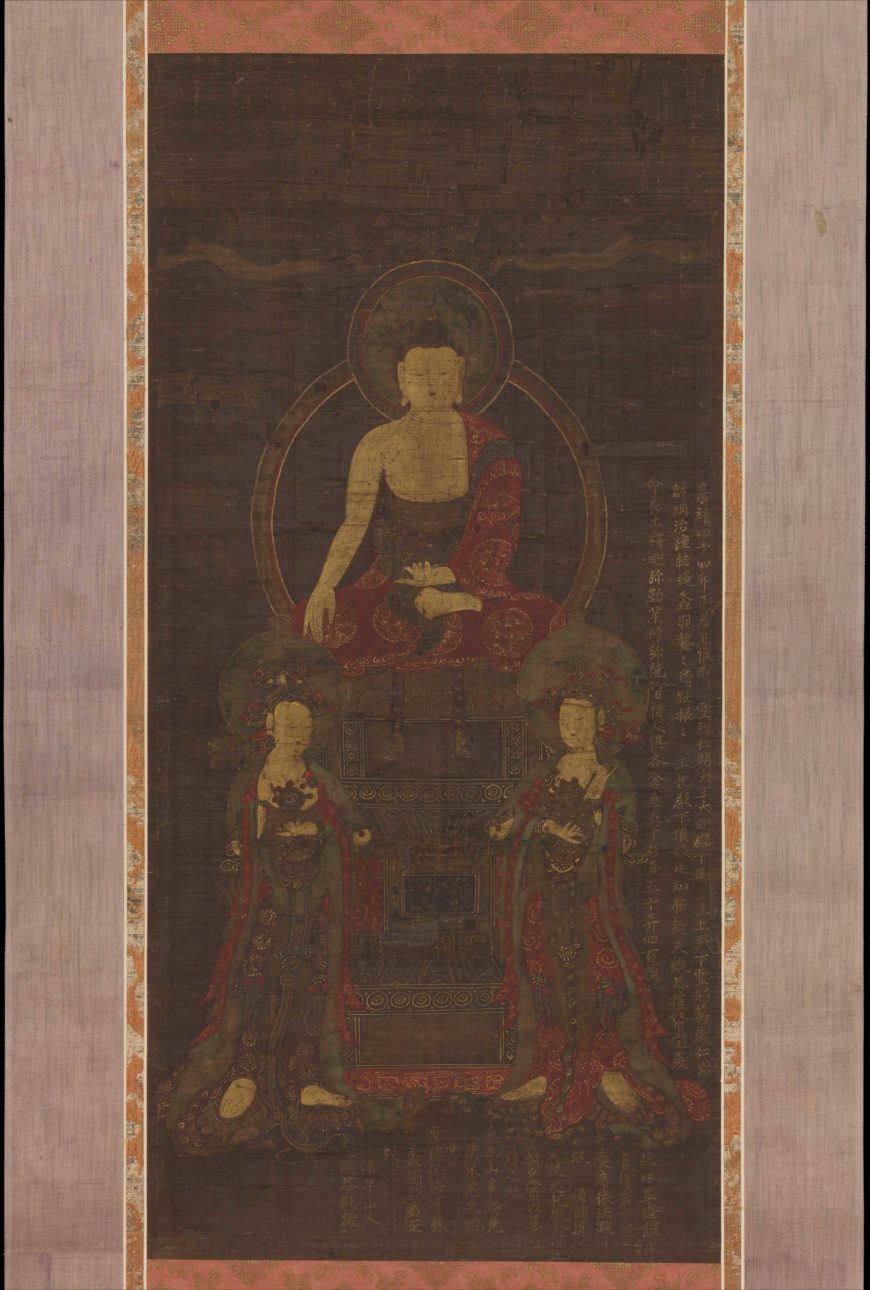 In a Joseon dynasty painting, the Buddha sits in the center with Bodhisattva Manjusri and Bodhisattva Samantabhadra at his side. This is called the Shakyamuni Trinity or Triad.

Manjusri is often depicted with a lion, as seen in a peaceful painting by Japanese artist Shūsei. The Bodhisattva Manjusri represents the wisdom of all the Buddhas. Sometimes he is depicted holding a sword or a scepter. In China, Manjusri is known as Wenshu, and in Japan he is known as Monju. Another archetypal bodhisattva figure is the Maitreya. Maitreya, after 599, marble and pigment, China, 17.8 cm high (The Metropolitan Museum of Art)

The Bodhisattva Maitreya, or Buddha Maitreya, is the future Buddha who will succeed the Buddha Gautama, the Buddha of the present age.

Himalayan Art: The Three Lords of the World

The Silk Road Foundation: When Herakles Followed the Buddha

Cite this page as: The Dunhuang Foundation, "Bodhisattvas, an introduction," in Smarthistory, May 11, 2021, accessed February 4, 2023, https://smarthistory.org/bodhisattvas-introduction/.