Guido Mazzoni, Lamentation, 1480s, created for the no longer extant church of Santa Maria della Rosa, today in the Church of the Gesù (Ferrara, Italy) Italy (photo: Sailko, CC BY 3.0)

In the early 1480s, Duke Ercole d’Este, ruler of the North Italian city-state of Ferrara, hired the artist Guido Mazzoni to create a life-size, terracotta sculpture group of seven biblical figures gathered around the dead body of Jesus Christ. The characters are those associated in religious texts with the final phase of Christ’s human life: the Virgin Mary, Mary Magdalen, Mary Cleofas, Mary Salome, John the Evangelist, Nicodemus, and Joseph of Arimathea. Painted in naturalistic polychrome and modeled with great physical realism, these figures demonstrate deep emotional reactions to the death of Christ whose corpse, modeled with equal naturalism, lies at their feet.

Guido Mazzoni, the dead Christ, detail of the Lamentation, 1480s, created for the no longer extant church of Santa Maria della Rosa, today in the Church of the Gesù (Ferrara, Italy) (photo: Sailko, CC BY 3.0)

Among the biblical mourners are two figures local audiences would have immediately recognized: Duke Ercole and his wife, the Duchess Eleonora of Aragon. Both rulers are presented as active participants in the drama of Christ’s death.The duke is put in the role of Joseph of Arimathea, the wealthy donor of Christ’s tomb, while the duchess is cast as Mary Salome. Guido Mazzoni, the Duchess Eleanora of Aragon as Mary Salome and Duke Ercole d’Este as Joseph of Arimathea, detail of the Lamentation, 1480s, created for the no longer extant church of Santa Maria della Rosa, today in the Church of the Gesù (Ferrara, Italy) (photo: Sailko, CC BY 3.0)

The sculpture group was placed in a public church, Santa Maria della Rosa (now destroyed), in a new quarter of the city of Ferrara that the duke was actively developing. Through humble clay, Mazzoni created a work that reflected his patrons’ deep Christian faith, their privileged place within the political and spiritual hierarchy, as well as their noble generosity.

In the princely courts of renaissance Italy, the display of magnificence through art and architecture made from rare and costly materials—marble, gold, silver, precious gems, silk thread and the like—was one of the ways a ruler might demonstrate his power. The more marvelous the objects that a ruler collected or spectacular the buildings that he sponsored, the more noble and learned he (and occasionally she) was understood to be. 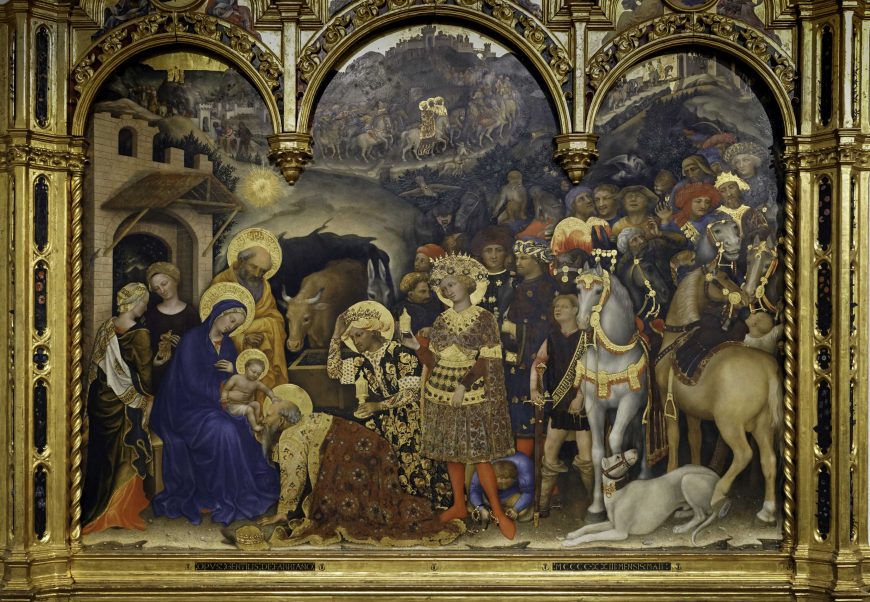 This display of magnificent nobility was important to a ruler; it justified his position of authority over his subjects. Sculptures in bronze or marble, silk tapestries with silver and gold thread, paintings encrusted with precious gold-leaf and inlaid with gemstones—such works of art made from materials themselves thought to be “noble” helped a ruler to craft a persona of rightful authority. This performance of nobility through patronage was replicated by the wealthy elite of republican states, like that of Florence, where members of the rising merchant class sought to elevate their own social positions by emulating the patronage practices of traditional aristocrats. An example of this is the opulent—and expensive—altarpiece of the Adoration of the Magi  created by Gentile da Fabriano for the wealthy Florentine banker, Palla Strozzi. With its extensive gold-leaf, elaborate gilded frame, and heavy use of expensive pigments such as ultramarine blue, the image spoke to the material wealth and fine taste of its illustrious patron.

Over the course of the early renaissance (usually designated in Italy as the fifteenth century), this emphasis on materiality began to shift. While the importance of the monetary value of artistic and architectural media was never fully eclipsed (people still wanted objects made from costly materials) new value was placed on the skill of the artist. New artistic theories were developing in the early 1400s, most famously recorded in Leon Battista Alberti’s treatise, On Painting (1435/6). In this text, one of the first theoretical discussions of art in the European tradition, the Florentine scholar explicitly advises against the use of gold or other costly media, calling upon the artist to ennoble his work with skill and ingenuity over raw materiality. Artists were tasked with rivaling or even surpassing Nature in their treatments of the visible world. Alberti further advised artists to appeal to the emotions of their audiences by creating figures that displayed believable feelings. The artist at the cutting-edge of early renaissance art was one who could suggest both physical and psychological reality. Guido Mazzoni came of age as an artist during this period of shifting visual interests and new appreciation for visual artists’ creations as intellectual output. While little is known of his personal life, Mazzoni was fortunate in coming from a well-connected family (his grandfather was a member of the rural gentry and his father was a notary) and had close ties to the glamorous Este court. His privileged social position undoubtedly helped him to navigate courtly circles as an artist. Mazzoni worked for and was awarded marks of favor from Duke Ercole I d’Este of Ferrara, Duke Alfonso of Calabria (King Alfonso II of Naples), and the French monarchs Charles VIII and Louis XII. By all accounts, the sculptor enjoyed a highly successful career and was able to capitalize on the rising social status of visual art-making. He was well-paid for his work and well-recognized for the nobility of his profession, even being awarded a knighthood by Charles VIII of France in 1496. Terracotta was a popular sculptural material throughout the early renaissance. It offered unique mimetic and technical possibilities to artists and was known to have been used as an architectural and sculptural medium by the ancient Etruscans, lending it ancient authority.

Mazzoni’s sculpture group created for Duke Ercole was one of several terracotta groups the artist made in the last quarter of the fifteenth century. He created numerous lamentation groups, such as the one in the Church of St. John the Baptist in the crypt in Modena, as well as other subjects including the Adoration of the Madonna and Child in the crypt of the the Modena Cathedral. Although the figures are made from humble clay (a material far more readily available in the region of Ferrara than stone), through the artist’s skillful manipulation this lowly material was transformed into a virtuoso display of artistic ingenuity and refined, courtly taste. Each figure is modeled with careful attention to physical and anatomical realism. The bodies are accurately proportioned, the gestures are graceful and naturalistic, and facial features and expressions are exquisitely precise. As the sixteenth-century author, Giorgio Vasari, made note, Mazzoni’s figures were “truly more than alive” (veramente più che vivo). [1]

The extreme realism of his figures and the superfluity of details in sculpted flesh, cloth, and gestures reflected not only the ultimate early renaissance artistic goal of surpassing nature but also the sophisticated taste of the Italian courts. At the Ferrarese court in particular, northern European art was highly valued.

Art historians have often dismissed Mazzoni’s work as “popular art,” preferring the stoic idealism of the high renaissance to his emotionally charged and highly naturalistic imagery. This designation implies a lack of sophistication that does an injustice to the artist’s skill in manifesting renaissance artistic goals. Thankfully, recent interest on the topics of patronage, the history of the body, and the history of the emotions has prompted a new appreciation for Mazzoni’s accomplishments.

Read more about expanding our understanding of the renaissance on Smarthistory

Read more about Italian terracotta sculpture from the Victoria and Albert Museum, London

Read about another famous sculptor, the Florentine Luca della Robbia, who who worked in terracotta