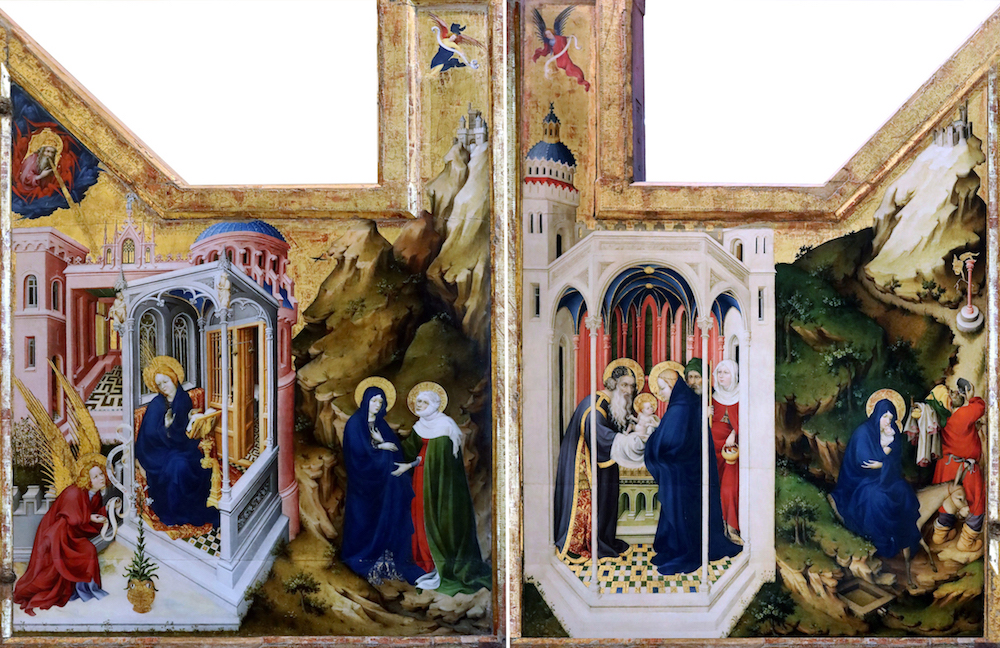 An altarpiece fit for a duke

The two beautiful paintings above, by Melchior Broederlam, were made for the exterior of an altarpiece. Inside was an elaborately carved wooden triptych (below).

The interior was sculpted by Jacques de Baerze (it was common to combine sculpture and painting in a single altarpiece — see this later example by Rogier van der Weyden). Together, the paintings (by Broederlam) and sculpture (by de Baerze) are known as the Crucifixion Altarpiece. Burgundy and the Burgundian Netherlands in 1467 (map: National Gallery of Art)

The Crucifixion Altarpiece of Champmol was commissioned by the Duke of Burgundy, Philip the Bold, for the monastery he founded known as the Chartreuse de Champmol (charterhouse/monastery of Champmol), outside of Dijon, France.[1] At the time, Dijon was the capital of the Duchy of Burgundy and the Duke — Philip the Bold — was one of the wealthiest individuals in western Europe.

The richly decorated monastery at Champmol was intended to be the final resting place for the duke and his family and so it housed the tomb carved for him.

The Crucifixion Altarpiece illustrates the life of Christ from the time of his immaculate conception to that of his burial. (While Christ’s conception was immaculate — free from sin — the term Immaculate Conception is usually used to refer to Mary’s conception by her mother, Anne, rendering Mary the suitable mother for the child of God). The story begins on the exterior with Broederlam’s imagery which shows the early life of Christ: the Annunciation, the Visitation, the Presentation in the Temple, and the Flight into Egypt. The narrative continues when the altarpiece is open, beginning with the Adoration of the Magi, then the Crucifixion of Christ (the central and largest of the scenes), and the final representation of Christ’s Entombment.

The visual delight of Broederlam’s panels It is safe to say that Broederlam’s two panels are visually complex. Not only did he delight in the International Gothic style of the period, but he also painted with an eye toward naturalism and capturing of minute detail.

Broederlam balanced the pictorial elements in each panel, arranging architecture, landscape, and figures so they are in visual harmony with one another. For example, in both panels, the architectural structures are placed to the left, while the landscape occupies the right side of the composition. As a result, when the panels are side by side, there is an alteration of architecture and landscape.

Similarly, in both panels, the landscape rises to the right with rocky, undulating hills, each surmounted by a walled town. Also in both panels, an angel fills the space in the panel’s rectangular projection. Tying all these elements together is Broederlam’s repeated use of red, blue, and pink, keeping the viewer’s eye moving from one scene to the next and creating continuity amongst the individual events. At the left side of the left panel, the Annunciation to the Virgin depicts the moment when the angel Gabriel announces to Mary that she will bear the son of God (Luke 1:26-38 and Matthew 1:18-22).  The event takes place within an elaborate architectural space. To the right, Mary, dressed in her traditional blue robe, sits in her chamber before a lectern on which we see a book of hours.

However, Mary is not reading the book. instead, she turns her head to the right, as if caught by surprise, and raises her hand in acknowledgement of the angel Gabriel who has just alighted in the left foreground. Gabriel’s banderole pronounces Mary’s new role as mother of the Savior. The Holy Spirit enters Mary through the golden rays that issue from God the Father’s mouth in the upper left corner. Two elements emphasize that the conception of Christ was immaculate (without sin): the vase of white lilies in front of Gabriel is a traditional symbol of the Virgin’s purity as is the walled garden behind Gabriel, known as the hortus conclusus. The next event, the Visitation, depicts the moment when the Virgin Mary, again dressed in blue, encounters Elizabeth, the mother of John the Baptist. According to tradition, both women were pregnant when they encountered each other. As John the Baptist recognized Christ as the Savior, he “leapt with joy” in his mother’s womb (Luke 1:42-45). The two women stand before a rocky landscape crowned by a fortified town. Small trees and bushes dot the landscape and a solitary bird flies through the sky, silhouetted against the gold leaf background.

Within this panel, color ties the two events together. Mary is seen twice in her traditional blue garment, the red of Elizabeth’s dress corresponds with that of Gabriel’s robe, and both relate to the red and blue that surround God the Father in the upper left corner.

The Presentation in the Temple and the Flight into Egypt

On the right-side panel, the Presentation in the Temple illustrates the moment when Christ is presented to the priest (Luke 2:22-40). The Virgin Mary presents the Christ Child by holding him above a golden altar inside an elegant temple that combines elements of Romanesque and Gothic architecture. Here, the Romanesque rounded arches contrast with the ribbed groin vault and pointed arch windows, both of which are characteristic of Gothic architecture. Broederlam also used this combination in the Annunciation, where the pink Romanesque church is juxtaposed against the more Gothic structure of the open loggia where the Virgin Mary sits. This pairing of the two styles of architecture has been interpreted as representing the Old and New Testaments. [2] Like the inclusion of a book of hours in the Annunciation scene, the style of the architecture dates to the period of the painting (not to biblical times) — possibly a deliberate choice to make the narratives feel more relevant and relatable.

In both scenes, Broederlam used intuitive perspective, where the buildings recede at opposite angles away from the front of the picture plane and the floors tilt forward, rather than recede back into space. By using this method, Broederlam created relatively three-dimensional spaces for his figures to inhabit. [3] The final event represented on the panels is the Flight into Egypt—a journey undertaken by the Holy Family to flee the murderous intentions of King Herod (Matthew 2:13-23). In this scene, the Virgin and Christ Child sit on the back of a donkey as they undertake their arduous journey. The Virgin’s blue mantle is wrapped around the young infant in a gesture of motherly protection.

Leading the way is Joseph, Mary’s husband, and as if to emphasize the difficulty of the journey, Joseph drinks heavily from a water bag. The rocky path on which they are about to embark leads up to a fortified city. Halfway up the path, a golden idol falls from a pink column, signaling the transition to the new Christian era brought about by the birth of Christ.

The eternal resting place of the duke

Filled with brilliant color, elegant figures, and charming detail, Melchior Broederlam’s panels for the Crucifixion Altarpiece are visual delights in the purest sense. The style of these painted panels matches that of the carved, gilded interior and together they created a stylistically unified narrative of the life of Christ. The devotional content and lavish representation are perfectly suited for the Duke and his eternal resting place in Dijon.

Original Corpus of Christ from the Crucifixion Altarpiece, removed during the French Revolution (Art Institute of Chicago)

Minott, Charles. “The Meaning of the Baerze-Broederlam Altarpiece.” In A Tribute to Robert A. Koch. Studies in the Northern Renaissance. Princeton, NJ: Princeton University Press, 1994, pp. 131-141.