Born in Augsburg, Bavaria, Holbein trained with his father, Hans Holbein the Elder, who operated a successful workshop. In 1515, he moved to Basel, where he worked for a circle of intellectuals and their printers. His first major paintings were the portraits of the mayor of Basel, Jacob Meyer and his wife in 1516, and in 1521/2 he painted the famous Dead Christ (all in the Kunstmuseum, Basel).

An atmosphere of religious crisis

Social and religious conflict caused by the Protestant Reformation in Switzerland made Holbein seek elsewhere for patronage. After an unsuccessful visit to France in 1524, he travelled to England in 1526 with an introduction to Sir Thomas More from the scholar Erasmus, whose portrait he had painted in 1523. He stayed for two years producing portraits at the court of Henry VIII, before returning to Basel where his wife and two children lived. A particularly violent burst of iconoclasm in Basel in 1529 amid an atmosphere of religious crisis made Holbein decide to return to England in 1532. Henry VIII commissioned a mural for Whitehall Palace glorifying the Tudor dynasty (destroyed by fire in 1698), which is recorded in Holbein’s preparatory cartoon (National Portrait Gallery, London). The famous image of Henry, hands on his hips and legs astride, derives from this mural.

Holbein died suddenly in London in 1543 of the plague. His fame rests on his superlative painted portraits, such as the dazzling Ambassadors and theUnknown Lady with a Squirrel and a Starling (both National Gallery, London) and his vivid yet informal portrait drawings (many in the Royal Collection at Windsor Castle).

From the series Dance of Death 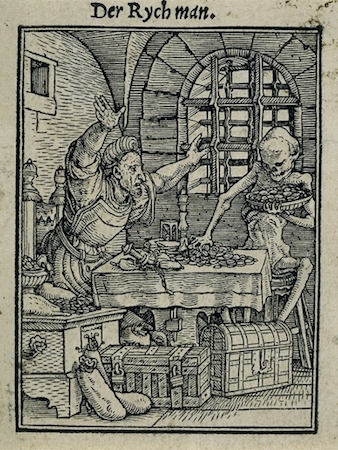 The Dance of Death is the most celebrated series of woodcuts designed by Hans Holbein the Younger. The set in The British Museum is one of a number of good-quality impressions issued without text. The woodcut was cut by Hans Lützelburger, one of the most distinguished specialists (formschneiders) of the time, in the years immediately before his death in 1526.

The images show Death escorting people from all walks of life to their final destiny. These include, for example, a ploughman, the Emperor, a child, a noblewoman, a bride and bridegroom, an abbot and a jester. At the time, images were often used to teach moral principles. The implied message is that we must live our lives virtuously and always be prepared, since Death visits without warning. Here, Death takes first what the rich man loves most – his money. Iron bars, stone walls and strongboxes are no defense. His candle has burnt down, and the hourglass indicates that his time has run out.

The theme “Dance of Death:” (Totentanz in German) appeared in the fifteenth and sixteenth centuries in mural paintings, stained glass windows, wooden carvings, metalwork, woodcuts, engravings, and printed books. It was also a subject of literary tracts. The preoccupation with mortality was partly due to the highly visible nature of death, especially in the years following the Black Death. Holbein’s version was very influential, and often copied.

Cite this page as: The British Museum, "About Hans Holbein the Younger," in Smarthistory, March 1, 2017, accessed December 7, 2022, https://smarthistory.org/hans-holbein-the-younger/.