A soberly dressed woman sits in a darkened room, working diligently on her sewing. The only light comes from a lamp on the table, filling the room with deep, ominous shadow. An older man in a fur hat touches her shoulder with one hand and with the other presents a fistful of coins. The sparsely lit and furnished room and the man’s leering countenance generate a sense of unease; the suspended moment leaves the viewer uncomfortable with what has happened—or what is about to transpire. But who are these people? What will the woman choose: to do her work and ignore the man, or to put down her sewing to take the money? Virtue or vice?

Judith Leyster’s painting, called Man Offering Money to a Woman by the Mauritshuis Museum but often referred to as The Proposition, is an enigmatic painting with an ambiguous subject. Painted by one of the few well-known female artists working in the Dutch Republic, its subject matter is unusual in Dutch art, though it has strong ties to several visual and symbolic traditions. Its diminutive size—a mere 30.8 by 24.2 centimeters—invites the viewer to examine it carefully and intimately. Judith Leyster lived and worked primarily in the Dutch city of Haarlem, one of the centers of artistic innovation in the first half of the seventeenth century. The city had benefitted from an influx of artists and artisans who fled Antwerp in the Spanish Netherlands (now Belgium) during the 80 Years War. Leyster was a member of the Guild of St. Luke (the guild for painters and several other trades), which was unusual for a woman. Like many of her colleagues including Frans Hals, Dirck Hals, and Pieter Codde, she primarily painted scenes of everyday people doing everyday things (otherwise known as genre scenes). Her work is distinctive for the flat background that gives little sense of an illusionistic interior space. Some scholars have attributed this to her possible contact with the “Utrecht School”—artists in the Dutch city of Utrecht who were influenced by Caravaggio whose early genre scenes such as The Cardsharps (below) display similarly flat backgrounds with figures close to the viewer. The sharp contrasts of light and dark on the woman’s blouse and face are also reminiscent of Caravaggio. There are just two visible light sources, the lamp on the table and the glowing foot warmer under the woman’s feet. The flame in the lamp is a form of illumination often seen in Caravaggio’s northern followers (and not in Caravaggio’s own work). On the surface, the painting shows an awkward interaction between a man and a woman. Dutch art often seems to reflect everyday life. Yet there are reasons to interpret these images symbolically, and not just as a reflection of life as it was lived. Some scholars (including Wayne Franits and Simon Schama), have interpreted the immense volume of imagery of women as indicative of a general anxiety about women’s education and what it meant to be a good Calvinist housewife. Since religious art was not being produced for the church in this Protestant country, morality had to be instilled in other ways. Secular genre scenes are often perceived as having a role to play in the moral education of the populace, either in presenting an image of ideal behavior or the consequences of bad behavior. Scenes of pious, moral women on the one hand and brothel scenes with lascivious women on the other may have flourished for just these reasons. 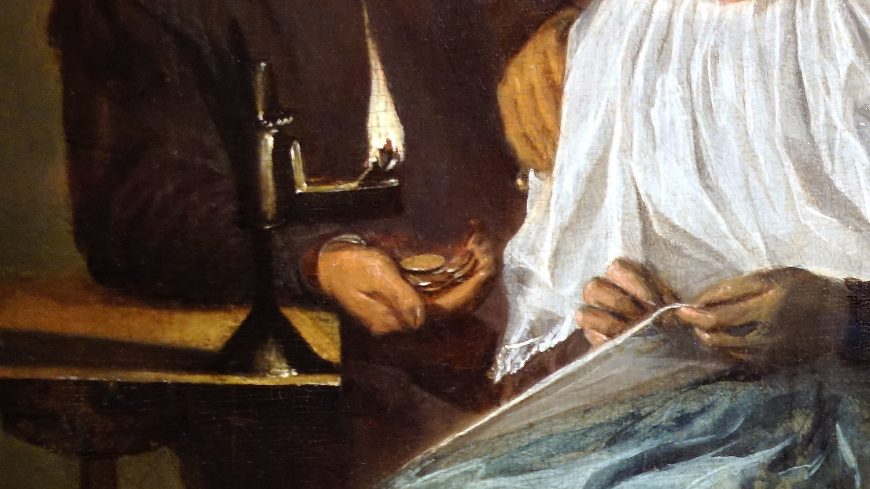 One commonly accepted interpretation of this painting—and the one from which the painting takes its most common nickname—was proposed by a leading scholar who sees the painting as representing a sexual proposition—one which the woman is staunchly ignoring.[1] This is a novel take on a traditional subject—brothel scenes where men interact with prostitutes or men and women drink and make merry in mixed company were among the most common subjects for genre paintings of the early seventeenth century. This type of scene has a long history in northern art (by artists such as Quentin Metsys, Lucas Cranach, Albrecht Durer, and others) and the actions of the participants was presented as unwise, unrestrained, and sinful, and women are usually presented as seductresses and thieves. These paintings therefore are models of how not to behave. By contrast, Leyster’s composition draws on another type of imagery that showed women hard at work—the very model of virtue.

A common component of visual culture in the seventeenth century was a type of book called an emblem book. On one page, the book might contain an image, a motto, and a poem, all explaining one moral lesson the reader was expected to learn. Books of this sort proliferated and some scholars have noted that there were more copies of emblem books circulating in seventeenth century Holland than bibles. Many scholars have tried to use this shared visual language to “decode” the components of genre paintings, with mixed success. Emblem literature was often targeted at specific audiences: for example, Jacob Cats, Houwelijk (Marriage) outlined all the proper stages of life for a woman. In one emblem, he presents needlework as one of the skills most valued and emblematic of domestic virtue. In Leyster’s painting, the woman becomes an icon of domesticity, working diligently in the cold, unlit room. Even the foot warmer on which the woman rests her feet to combat the cold has been connected to emblem books—as a symbol of the woman’s refusal of the man. One emblem book frames the foot warmer as a woman’s best friend since a man would have to be truly enticing to get a woman to step away from her foot warmer on a cold night. The woman’s firmly planted foot does not indicate a tendency towards a sexual liaison. Leyster’s composition has been seen as an important fore-runner of later genre painters such as Gerard Ter Borch, and, most famously, Johannes Vermeer. In Leyster’s painting, the viewer is left wondering to which tradition the woman belongs. Like much of Dutch art of the Golden Age (the 17th century), this painting is about choices: the choices of the subjects and by extension, the choices of the viewer. The woman is in a suspended state, a moment of decision. Will she virtuously continue her work, or arise, take the money, and go with the man? Will she choose virtue or vice? 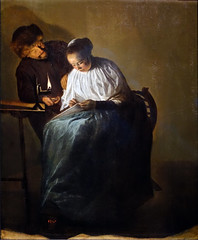 Judith Leyster at the National Gallery of Art

Leyster on the Google Art Project

Simon Schama, The Embarrassment of Riches: An Interpretation of Dutch Culture in the Golden Age (Vintage, 1997).