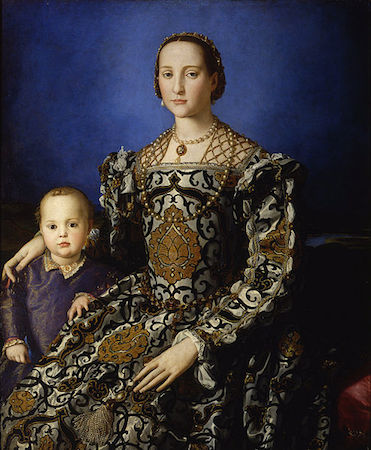 The marriage of Eleonora of Toledo and Cosimo I de’ Medici is perhaps one of the great love stories of the Renaissance. The second daughter of the viceroy from Spain, Cosimo first laid eyes on Eleonora during a trip to Naples.  After Cosimo became duke, he asked Eleonora’s father for her hand in marriage. Her father tried to convince Cosimo to take her older sister for a much larger dowry, but Cosimo, remembering Eleonora’s beauty, insisted on the younger daughter. The two were married in 1539, and it is reputed that Cosimo remained faithful to her throughout his marriage, even though it would have been easy for him to take a mistress. Eleonora was Cosimo’s constant companion, and even acted as his regent when he was ill. Because of her role as “first lady,” she is often regarded as the first modern woman. 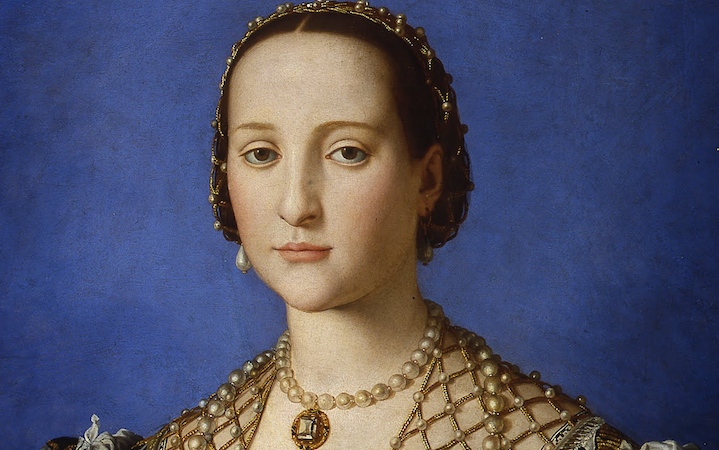 Nonetheless, contemporary opinion regarding Eleonora was split. To some, she was an overly religious Spaniard who refused to learn Italian. To others, she was a gambler and shrew, who spent much time in leisure at the Medici countryside villas. Whichever side you choose to take, it is undeniable that Eleonora was a boon to the Florentine people: she gave birth to eleven children and brought with her a large Spanish dowry. 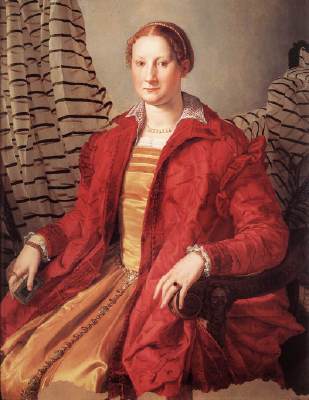 In Agnolo Bronzino’s Portrait of Eleonora of Toledo and her Son Giovanni, it is these last facts that Bronzino sought to immortalize. The painting shows a much-idealized Eleonora in an elaborately decorated and bejeweled dress, which dominates the painting (another portrait by Bronzino—shown left—which has been recently identified as Eleonora, depicts her as much frumpier and is probably closer to what she really looked like). To her right is her small son Giovanni, also dressed in an expensive garment. His full face and shining complexion testify to his health, and the supposition that he would grow into adulthood. The pair is set against a shallow blue background, and it almost appears as if Eleonora is radiating a halo.  This lends the painting the feel of an icon of the Madonna and Child, emphasizing the importance and sanctity of the duchess and her son. 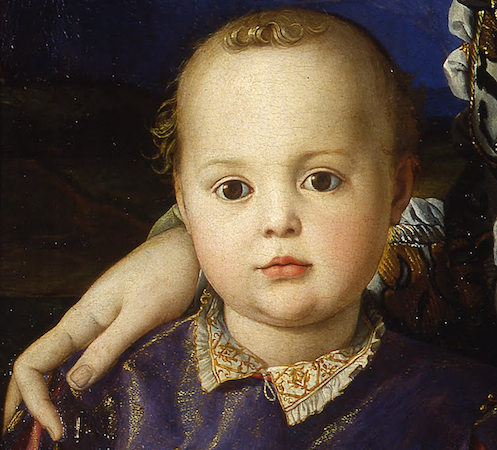 This is the first state portrait to include a likeness of the ruler’s heir. However, Giovanni was Eleonora’s second son, and no portrait exists of her and her first son, Francesco. This painting, then, is meant to testify to Eleonora’s fertility—in a short time, she produced not one, but two male heirs for a family that was on the verge of dying out—and, consequently, the security of the Medici dynasty. This in turn signified the security of the future of Florence. 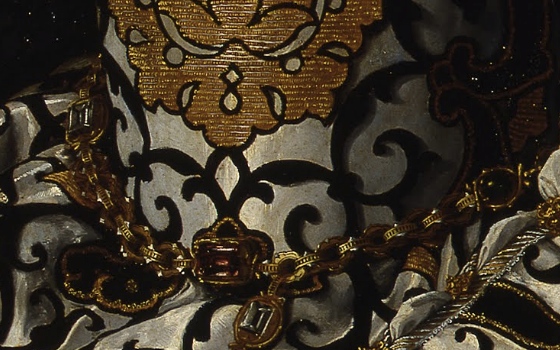 Eleonora’s dowry was comprised largely of Spanish textiles. Therefore, the iconic dress that she wears is a symbol of this fortune and the riches she brought from Spain.  Richly brocaded, Bronzino is able to use the dress to show his mastery of creating illusionistic textures. Over the centuries, people became so enamored with the dress that rumors started that she had been buried in it. Exhumation of her body, however, revealed that she had in fact not been, though she was wearing the pearl hairnet from the painting.  Goldsmith and sculptor Benvenuto Cellini (most famous for his sculpture of Perseus in the Piazza della Signoria) may have created the gold belt she wears around her waist. The painting also shows that she was not beholden to Florence’s sumptuary laws, or proscriptions regarding the display of wealth in one’s clothing.

People have used the portrait as a basis for describing Eleonora as cold and aloof. She does appear to look down on us, and there is very little interaction between her and her son.  This is very different compared to paintings of the Madonna and Child that Bronzino produced, which do show the Virgin interacting with the Christ child in a genuinely warm way. However, in Mannerist painting, there is a great difference in the way religious and secular subjects are portrayed. The coldness that we perceive in the portrait of Eleonora was typical of court portraiture, and cannot be used as evidence about her character. 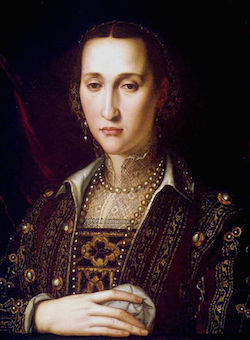 Although the portrait is certainly meant to testify to the security of the Medici line, both Eleonora and Giovanni, along with another of Eleonora’s sons, Garzia, died at the same time in 1562 of a combination of tuberculosis and malaria. Cosimo is said to have been heartbroken. In her final years, Bronzino painted another portrait of Eleonora. In this one, the duchess stands in front of a neutral background and wears another richly brocaded black gown (black was one of the most expensive dyes to make, as it was based on pigments that came from the New World). However well-dressed she may be, Eleonora looks sad, pale, gaunt, and sickly.  It is no wonder that so many copies of the Portrait of Eleonora with her Son Giovanni exist. Certainly, this is how Cosimo, and the rest of Florence, wanted to remember her: a beautiful young mother of high birth, who cemented the future of Florence through her children and the wealth she brought to the city

Cite this page as: Christine Zappella, "Bronzino, Portrait of Eleonora of Toledo with her son Giovanni," in Smarthistory, August 9, 2015, accessed January 29, 2023, https://smarthistory.org/bronzino-portrait-of-eleonora-of-toledo-with-her-son-giovanni/.