What Renaissance artists had clearly achieved through the careful observation of nature, including studies of anatomical dissections, was the means to recreate the three-dimensional physical reality of the human form on two-dimensional surfaces. In part, the key to this achievement lay in understanding the underlying, hidden structure of the human body, which enabled artists to reproduce what it was they saw in the real world on the flat surface of a wall (in the case of frescoes), or that of a wooden panel or paper (in the case of drawings and paintings).

Artists in the early fifteenth century had learned to portray the human form with faithful accuracy through careful observation and anatomical dissection. In 1420, Brunelleschi’s experiment with perspective provided a correspondingly accurate representation of physical space.

Antonio Manetti, Brunelleschi’s biographer, writing a century later, describes the experiment based on careful mathematical calculation. It seems reasonable to assume that Brunelleschi devised the method of perspective for architectural purposes—he is said by Manetti to have made a ground plan for the Church of Santo Spirito in Florence (1434-82) on the basis of which he produced a perspective drawing to show his clients how the church would look once built. We can compare this drawing (left) with a modern photo of the actual church (below). It is clear how effective the new technique of mathematical perspective was in depicting spatial reality. 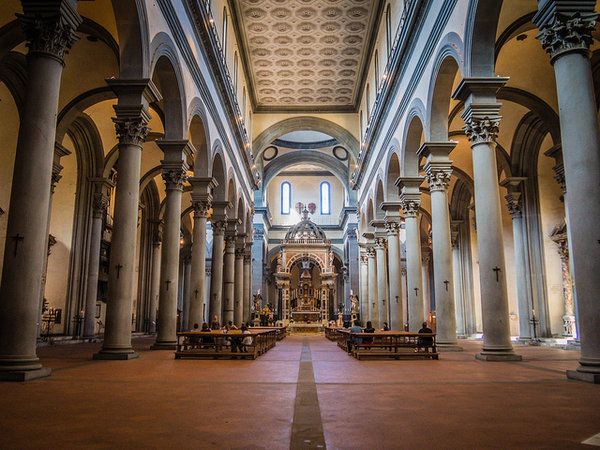 The body in space 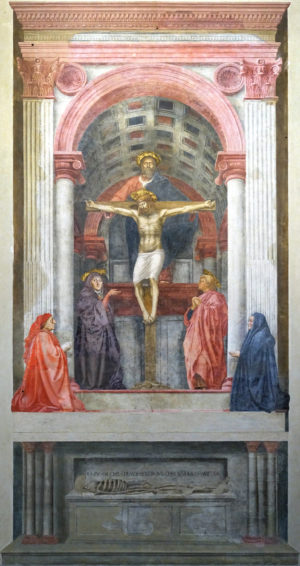 But this was just the beginning. Ten years later, the painter Masaccio applied the new method of mathematical perspective even more spectacularly in his fresco The Holy Trinity. The barrel-vaulted ceiling is incredible in its complex, mathematical use of perspective. In this diagram, lines overlay Masaccio’s actual geometric framework to make clear the structure of the perspective system itself. It was not long before a decisive step was taken by Leon Battista Alberti, who published a treatise on perspective, Della Pitture (or On Painting), in 1435. Once Alberti’s treatise was published, knowledge of perspective no longer had to be passed on by word of mouth. Newly codified, perspective became not just a matter of artistic interest but a philosophical concern as well.

The arrow in the eye: The Psychology of Perspective and Renaissance art