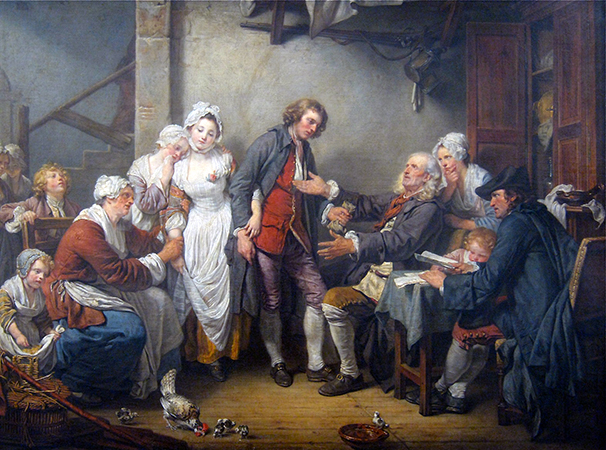 A story of love

It is a simple story of love.  We are transported to a rural country village to attend a wedding. The happy couple is in the center, their arms entwined in an obvious symbol of their love. The bride’s father, seated on the right, extends his arms in congratulations—he has just handed his new son-in-law his dowry.

The bride’s mother and younger sister caress her arm, sad to see her leave the family but very happy that she has found love.  On the other hand, the older sister leans over her father’s shoulder to look on enviously and perhaps somewhat judgmentally, at her sister who has beaten her to the altar. The rest of the younger family members play nearby, accompanied by a few barnyard guests. With only a notary in attendance to make the marriage official, the ceremony can only be described as spare, and the French bourgeois public (or middle class) enthusiastically accepted Jean-Baptiste Greuze’s composition of humble simplicity. 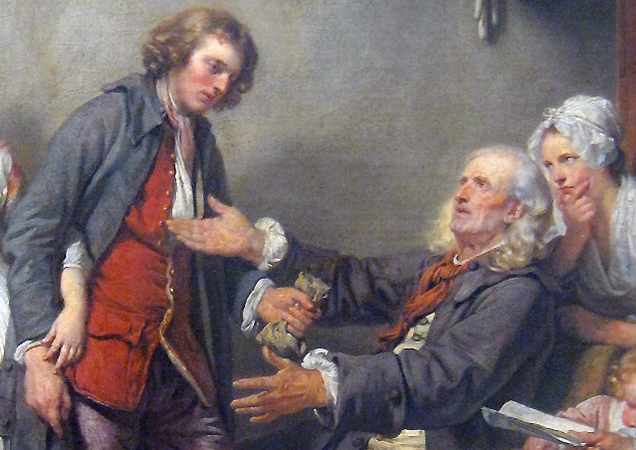 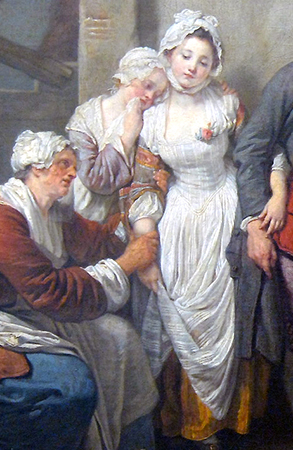 The Enlightenment is arguably one of the most radical moments in Western philosophical history, and while The Village Bride—a painting of a rural wedding—does not initially seem philosophical in subject, the age of the Enlightenment provides an important context for understanding the painting. Scholars questioned the traditions of Western culture, including the authority of the church and the arbitrary rule of the monarchy. Figures such as Denis Diderot attempted to compile all human knowledge into the first Encyclopédie. François Marie Arouet, who went by the name Voltaire, advocated for the advancement of science and technology. Yet none of these thinkers were as widely read as Jean-Jacques Rousseau (even the Queen Marie Antoinette was a fan). The famous introduction to his 1762 work The Social Contract, “Man is born free, and everywhere he is in chains,” clearly states his philosophical concern. According to Rousseau, the customs of modern society—even its arts, sciences, and laws—have corrupted the inherent virtue and moral character of “natural” man. If we could throw off these self-imposed chains and return to a more natural state where emotion was respected, then compassion would replace tyranny and the alienation of the individual.

This idea of “natural” man led to a focus on an idealized view of rural, peasant life. Peasants, according to this line of reasoning, lived more simply, were closer to the earth and had not been corrupted by the forces of elite society. Further “natural” man was not ruled entirely by reason and logic—important signifiers of the modern world. Rousseau wrote, “To exist is to feel; our feeling is undoubtedly earlier than our intelligence, and we had feelings before we had ideas.”¹​​ With its depiction of a simple rural interior and the emotions of love, sadness, and joy, Greuze’s Village Bride encapsulates Enlightenment ideas of man—natural and uncorrupted.

Not a fête galante 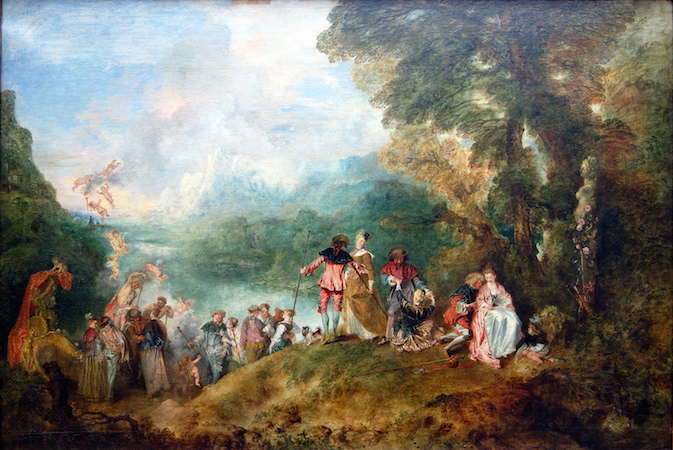 Interest in the natural world had been central to the Rococo style since its inception earlier in the eighteenth century. We can see it, for example in the popular Rococo subject, the fête galante (typically a depicted the outdoor amusements of French upper-class society). Artists like Antoine Watteau created dreamy, romantic depictions like those of the young couples who have journeyed to the mythical island of love, Cythera (below).

Other Rococo artists like François Boucher and Jean-Honoré Fragonard were favorites of King Louis XV’s mistresses Madame de Pompadour and Madame du Barry, respectively. Each commissioned scenes of voluptuous, rosy-bottomed cupids and young lovers. These paintings were about pleasure and indulgence, and when compared to Greuze’s composition, The Village Bride becomes a commentary on aristocratic life. These fête galante love affairs are frivolous and lustful, while the actual marriages between various aristocrats was typically understood as a match made for political power, money, or convenience. In contrast, the couple that Greuze has given us is clearly the result of love. Here is a hard-working family with no power and little money, nevertheless rewarded for their virtuous love with happiness.

Jean-Baptiste Greuze first achieved professional success in the Salon of 1755.  His sentimental scenes found admirers among the upper middle-class public.  At this time the art market had expanded beyond the wealthiest aristocracy, and a painting such a The Village Bride would have been a delight to the upper middle-class.  It is easy to imagine the French public crowding around this painting, and discussing each pose and facial expression in detail. Greuze even found a fan in the philosopher, Denis Diderot, who remarked how difficult it was to even get close to the canvas because of the crowds. Greuze’s art would eventually fall out of style with the advent of Neoclassicism, but his paintings will always stand as a testament to the movement of natural man and moral philosophy.

Greuze and his followers from The National Gallery of Art

Greuze on Your Paintings