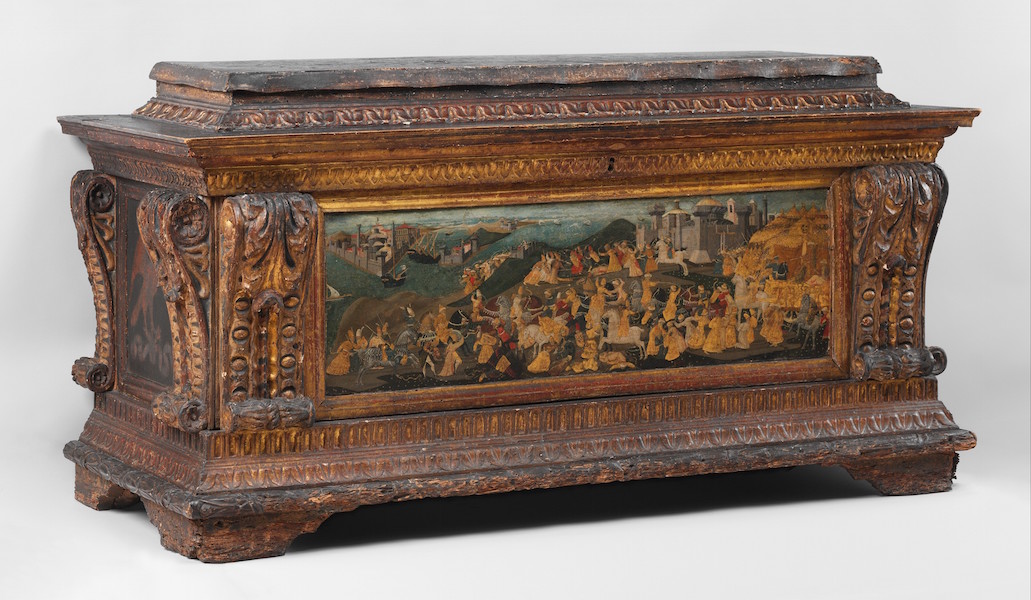 All the items a bride would need

As one of the few cassoni (marriage chests) to survive intact from the fifteenth century, The Metropolitan Museum of Art’s Cassone with the Conquest of Trebizond provides us with the opportunity to understand Renaissance Florentine social and political ideals and attitudes. Cassoni (also called forzieri in Florence) were expensive, lavishly decorated chests which accompanied a bride to her new marital home. These chests were given to the bride by her parents as their contribution to the wedding. Carrying precious textiles and goods such as expensive clothing, jewelry and accessories, the chests contained many of the items the bride would need and use in her new home. The cassone was carried alongside the bride accompanied by her father and family through the streets of Florence, an important part of the ritual of marriage. It served to demonstrate the wealth of the family to the city’s citizens, displaying their power and influence. 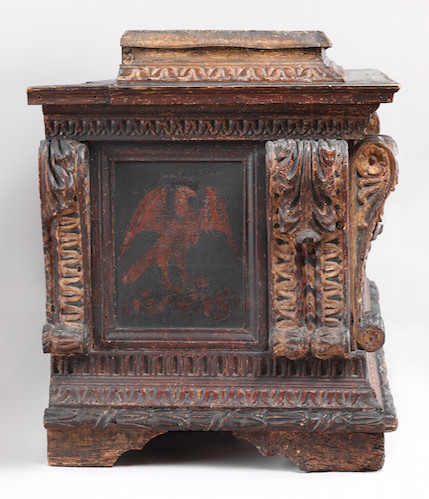 Each of the main surfaces of the chest were decorated, often with painted horizontal panels depicting narratives (istorie) taken from such sources as Greek and Roman mythology, the Old Testament and fourteenth-century literature (for example the work of Boccaccio and Petrarch were particularly popular). The Metropolitan’s Cassone stands out due to the choice of subject matter on the front panel (above)—depicted a contemporary historical event, the Conquest of Trebizond (in present-day Turkey) as well as for the two artists involved—Marco del Buono Giamberti and Apollonio di Giovanni di Tomaso.

Emblazoned on each of the side panels of the chest (left) is the family emblem (imprese) of the Strozzi, an ancient and noble Florentine family with strong political influence. The emblem, comprised of a falcon/hawk perched on a caltrop (a spiked metal device that when scattered on the ground in battle, caused the enemy’s horses to trip and fall), would have been immediately identifiable to those on the streets of Florence. This symbol therefore served to identify the family involved and the conspicuous expenditure of the Strozzi, reinforced by their numerous artistic and architectural projects in the city such as Gentile da Fabriano’s Adoration of the Magi. 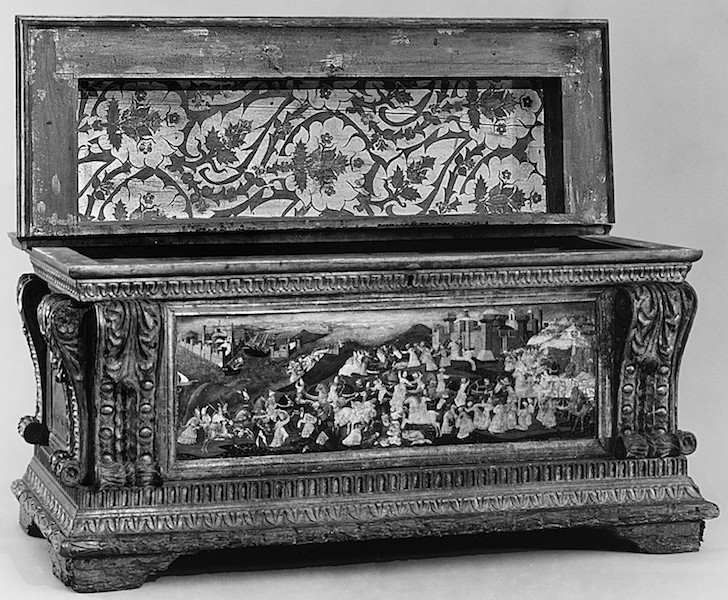 The inside of the cassone provides insight into the role of women in Florentine society and the expectation that they bear children. Often the inner lid of cassoni were decorated with the representation of an erotic and sensuously nude reclining male or female figure. It was believed at this time that in order to conceive a beautiful (preferably male) child, women should surround themselves with beautiful and stimulating art works. In the case of the Metropolitan Cassone, the inside of the lid and the back panel (above) are decorated with painted imitations of textile designs—pomegranate-style velvets with metal-thread brocading and two heights of silk pile. The extravagance of the decoration mirrors the expensive nature of the objects which it housed. Of particular interest is the pomegranate motif and its relationship to the bride’s role as a wife and mother. In Renaissance society pomegranates were recognized as symbols of fertility. Each time the newly-married woman opened up the cassone, she saw this symbol, reminding her of her prescribed role in marriage. 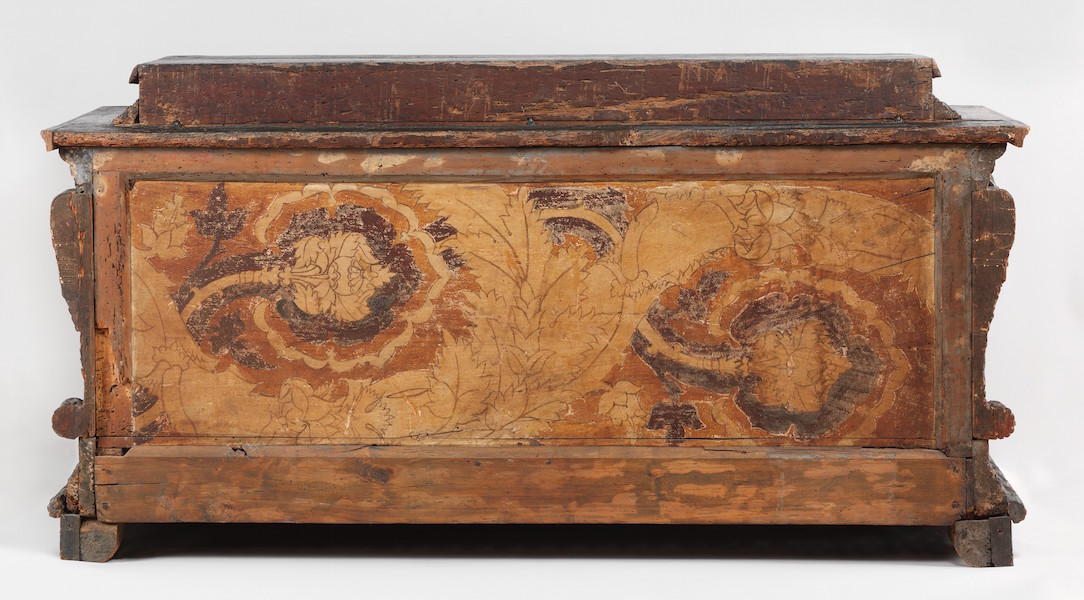 The back view of the cassone appears to be unfinished. The reason for this becomes apparent when the location of the piece is taken into consideration. The chest was placed in the private bedchambers of the wife—usually at the foot of the bed. As it was placed in this manner, the back panel was not on display and therefore the finish was not seen as a priority by the workshop, certainly not to the same extent as the rest of the piece. This demonstrates that both the patron and artists attempted to reduce the cost of the work where possible, preferring to concentrate the lavish decoration and finish to the areas which would be visible to the public when carried through the city and to the eyes of the couple when installed in their home.

The front panel of the cassone was originally thought to present a contemporary historical event—the fall of the city of Trebizond (modern-day Trabzon in Turkey) at the hands of the Ottoman Sultan Mehmed II in 1461. Located on the southern coast of the Black Sea, Trebizond was considered at the time as the last outpost of the Byzantine Empire and its surrender signaled the end of that Empire. The victory of the Ottoman Turks (Muslims) signified the serious threat they now posed to Europe. Therefore this event was of particular relevance to contemporary Florentines, especially those from the elite class such as the Strozzi. 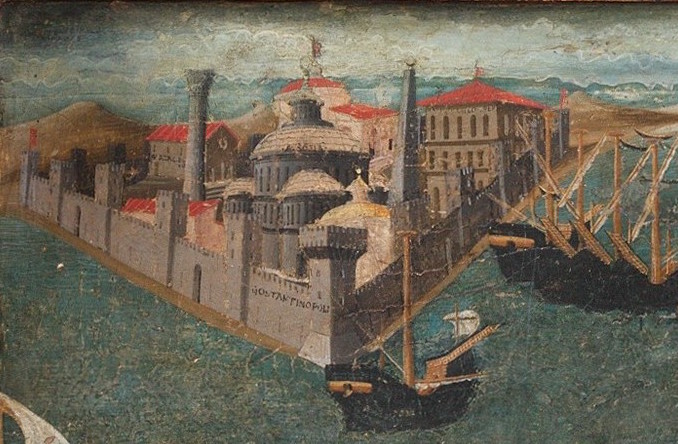 In the top left corner of the painted panel, the walled city of Constantinople is represented (above). In the top right (below), dominating a hill is the city of Trebizond. In the middle and foreground, a battle scene is portrayed. Opulently-dressed soldiers whose costumes are decorated in the expensive medium of gold leaf fight on foot and on horseback. 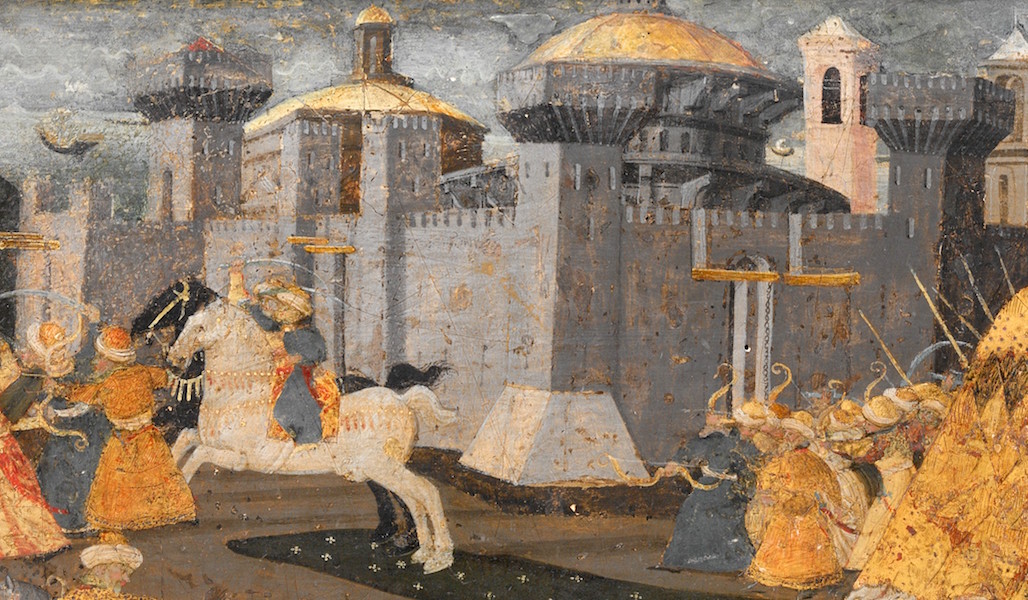 Outside Trebizond’s walls, the Ottoman encampment and the copious amount of gold leaf utilized to depict it, stands out from the rest of the scene. Mehmed II is seated on a triumphal chariot pulled by two white horses in the bottom right, demonstrating his importance in the scene as the victorious leader. The abundant use of gold leaf shows the patron’s wealth and recalls the similar treatment of the theme of opulence as seen in Da Fabriano’s Strozzi Altarpiece. 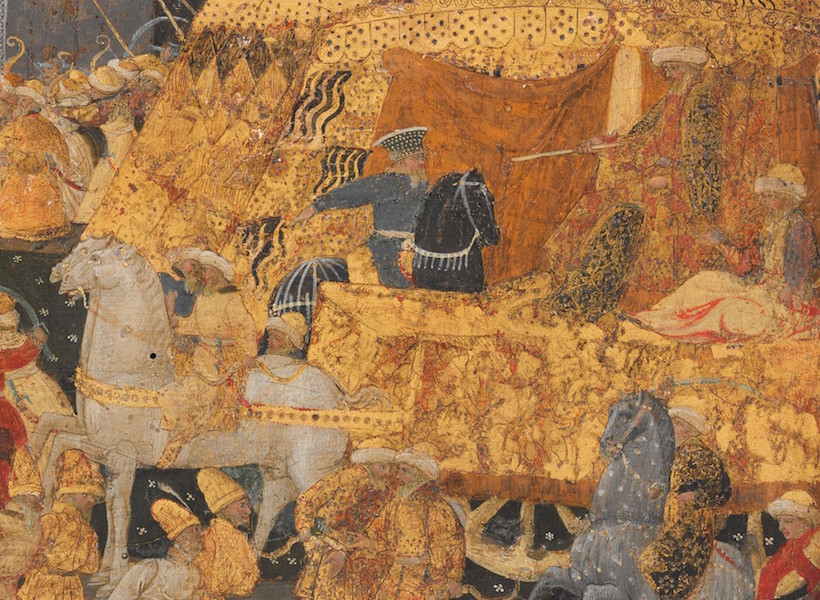 Recent analysis of the cassone and particularly the costumes of those depicted in this panel revealed that it is in fact the Ottoman forces who are being vanquished. It is now believed that the artists deliberately conflated two historical events within the one scene: the fall of Trebizond in 1461 and a battle which took place in 1402, when the Ottomans were defeated at the hands of the famous Mongol Emperor Bayezid I and his troops at Ankara. By conflating these two events in this manner, the artists visualized the idea that the Ottomans were not invincible and although they had brought about the fall of the Byzantine Empire, they could be defeated once again. The panel therefore reinforced the belief that the Ottomans were no match for the might of the armies of mainland Europe.

Although an object destined for the private bedchambers of a newly-married couple, the Cassone with the Conquest of Trebizond brings together successfully the prescribed domestic duties and political concerns of fifteenth-century Florentines. 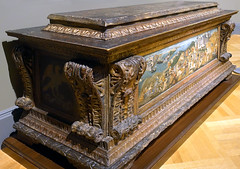 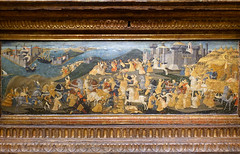 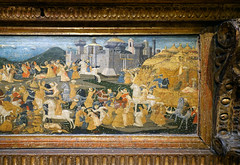 Cite this page as: Elaine Hoysted, "Cassone with the Conquest of Trebizond," in Smarthistory, November 22, 2015, accessed August 1, 2021, https://smarthistory.org/cassone-with-the-conquest-of-trebizond/.