Transcript of the trial: On Saturday, July 18, 1573, Paolo Caliari Veronese who lives in the parish of San Samuele,  Venice was summoned to appear before the Holy Tribunal by the Holy Office [the inquisition], there he stated his name when asked. When asked what he did for a living, he responded, “I paint and make figures.”

Inquisition: Do you know why you are summoned here?
Veronese: No your honors.
Inquisition: Can you imagine what the reason is?
Veronese: I can.
Inquisition: Tell us.
Veronese: I was told by the priests, or rather by the Prior of SS. Giovanni e Paolo, whose name I don’t know, told me that he had visited here and that Your Great Lordships had commanded the Mary Magdalene replace the dog. I responded that that I would have happily done this and anything else for my and the sake of the painting, except that I did not believe that the figure of the Magdalene would look good there, for a variety of reasons, which I can speak to if I am given the chance. 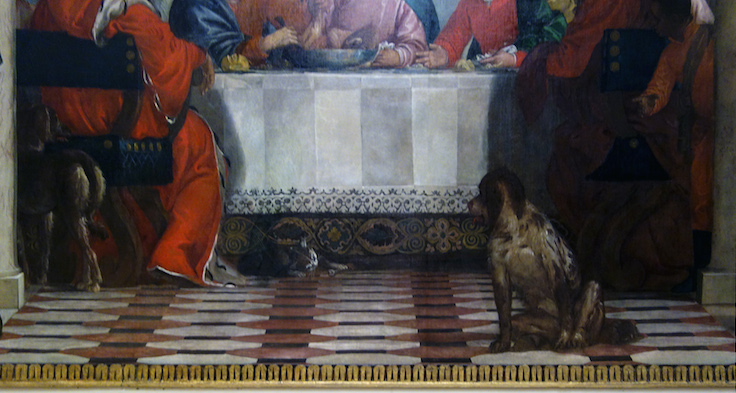 Inquisition: What is the subject of the picture you are speaking of?
Veronese: It is a painting of the Last Supper, with Jesus Christ with his Apostles in the house of Simon.
Inquisition: Where is this picture?
Veronese: It is in the refectory of the Monastery of SS. Giovanni e Paolo.
Inquisition: Is it painted on the wall, on wood, or on canvas?
Veronese: Canvas.
Inquisition: How tall is it?
Veronese: Perhaps seventeen feet.
Inquisition: How wide is it?
Veronese: About thirty-nine feet.
Inquisition: Have you painted servants at the Lord’s Supper?
Veronese: Yes.
Inquisition: Tell us how many people there are, and each one’s activities.
Veronese: Below the owner of the inn, Simon, I put a carver, He came, I guess, for his own amusement, to observe the goings-on at the table. There are many other figures but I cannot remember, its been a long time since I finished the painting.
Inquisition: What was your intent regarding the man whose nose is bleeding?
Veronese: I intended him to be a servant, whose nose was bloody because of some accident.
Inquisition: And what did you mean by the armed man, clothed like a German, holding a halberd?
Veronese: That will take longer to explain.
Inquisition: Tell us.
Veronese: Painters take the same poetic license that poets and madmen take, and this is how I made these two soldiers, one drinking the other eating, at the foot of the stairs, though both ready for prompt action. It seemed appropriate to me that the wealthy owner of this house, a noble I understand, would have hired security such as these men.
Inquisition: And the figure dressed as a jester with a parrot perched on his hand, why did you represent him?
Veronese: He is decorative, as is customary.
Inquisition: Who are those at the Lord’s table?
Veronese: The twelve Apostles.
Inquisition: What is St. Peter doing, the first one?
Veronese: He is carving lamb, to pass it to the other side of the table.
Inquisition: And who is the other man, next to him?
Veronese: He holds a plate for St. Peter to fill.
Inquisition: What is he doing.
Veronese: He is picking his teeth with a fork.
Inquisition: Who do you believe was at the Last Supper?
Veronese: Christ was there with his Apostles. But there was more space, so I included other figures that I created.
Inquisition: Did anyone tell you to paint Germans, jesters, or buffoons in this picture?
Veronese: No. I was told to create the painting as I thought fit, it was large and could accommodate numerous figures.
Inquisition: Shouldn’t painters only add figures in keeping with the subject and the most important people portrayed? Do you freely follow your imagination without restraint, without good judgment?
Veronese: My paintings are made with all the consideration I can bring to bear on them.
Inquisition: Do you think it is appropriate that the Last Supper of Our Lord includes jesters, drunks, Germans, midgets, and the like?
Veronese: No, your honor.
Inquisition: Do you not know that Germany and other places are infested with heresy and that in such place they commonly fill their paintings with sacrilegious images, that denigrate the Holy Church and spread evil to the ignorant?
Veronese: Your Honor, that would be evil. I can only repeat what I previously stated, That I have followed what others, better than me, have done.
Inquisition: What has been done by those better than you? Which things?
Veronese: In the Pope’s chapel in Rome, Michelangelo rendered Our Lord, Jesus Christ, his Mother, Saint John and Saint Peter, and the court of heaven, all nude, including the Virgin Mary, in the midst movements without decorum. 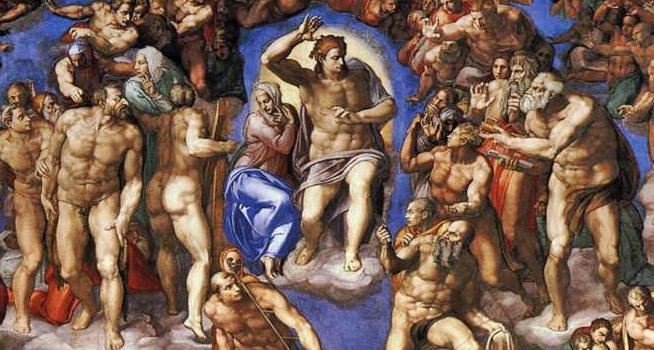 Inquisition: Don’t you understand that in a painting of the Last Judgment, clothing would not be worn, that there is no reason to paint clothes? Among those figures there is nothing except what befits the spiritual—there are no jesters, no dogs, no weapons, or any such silliness. Do you think this comparison, or any other that this example or any other justifies the way you painted your picture, and are you still certain that the painting appropriate to its subject?
Veronese: Your honor, I do not mean to defend it, but my intent was only good. I did not consider these issues enough, thinking that since the buffoons were outside the place where Our Lord sits, it was proper.

In the end, the judges decreed that the artist must correct his painting within three months from the day of the reprimand, in accordance with the judgment of the Holy Tribunal, and that the additional costs would be paid by Veronese.

This painting at the Accademia 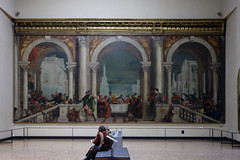 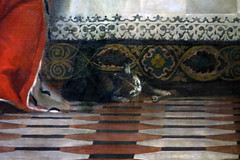 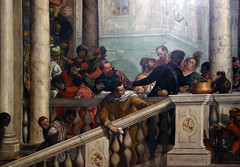 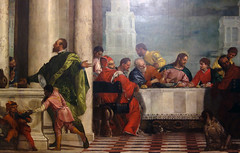 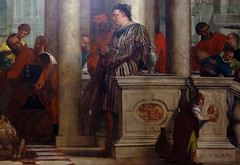 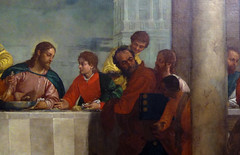 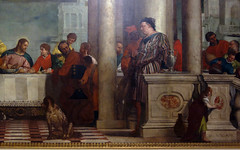 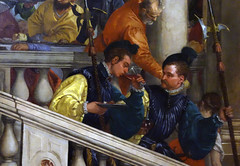 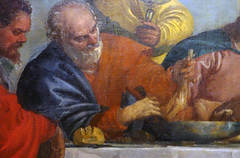 Cite this page as: Dr. Beth Harris and Dr. Steven Zucker, "Transcript of the trial of Veronese," in Smarthistory, August 9, 2015, accessed July 2, 2022, https://smarthistory.org/transcript-of-the-trial-of-veronese/.