Guido Mazzoni, Lamentation, 1480s, created for the no longer extant church of Santa Maria della Rosa, today in the Church of the Gesù (Ferrara, Italy) (photo: Sailko, CC BY 3.0)

A life-size, terracotta sculpture group shows seven biblical figures gathered around the dead body of Jesus Christ. Created in the 1480s for Duke Ercole d’Este of Ferrara, Guido Mazzoni’s sculpture group also includes the duke and his wife, the Duchess Eleanora of Aragon, cast in the roles of Joseph of Arimathea and Mary Salome. All of the figures express a range of emotional responses to the death of Jesus. These emotional displays in Mazzoni’s Ferrarese sculpture group are key to understanding the work’s function as a display of the patron’s nobility and piety. Emotions are inherent to humanity, but they are not universal and unchanging. Emotions vary across time and culture. They are nurtured or suppressed, constructed and understood according to people’s ideas about the human body, the human psyche, and humanity’s place within the universe. Guido Mazzoni, the Duchess Eleanora of Aragon as Mary Salome and Duke Ercole d’Este as Joseph of Arimathea, detail of the Lamentation, 1480s, created for the no longer extant church of Santa Maria della Rosa, today in the Church of the Gesù (Ferrara, Italy) (photo: Sailko, CC BY 3.0)

In renaissance Italy, displays of grief were expected to be moderated by Christian viewers’ faith in their salvation through Jesus Christ. Although sorrow at the death of a loved one was expected and valued as a display of personal affection, there were definite limits to how extreme the public display of grief was supposed to be. Saint Paul, one of the leaders of the early Christian church, had explicitly prohibited excessive mourning: “I would not have you grieve as others do without hope” (I Thessalonians 4:13–14). Emotional moderation was so important that in various parts of Italy throughout the renaissance period laws were passed prohibiting excessive mourning behaviors at funerals. Works of art that showed people in mourning situations (as in the scene of grieving over the dead body of Christ created by Mazzoni) were one way to help guide Christian audiences in appropriate behavior. While each of Mazzoni’s figures displays a believable sorrow, none of them tear their hair, shred their clothes, gesture wildly, or perform other expressions of what would have been considered socially inappropriate levels of grief.

Guido Mazzoni, Mary Magdalen, the Virgin Mary, and Mary Cleofas, detail of the Lamentation, 1480s, created for the no longer extant church of Santa Maria della Rosa, today in the Church of the Gesù (Ferrara, Italy) (photo: Nicola Quirico, CC BY 3.0)

While we may never truly know the inner emotional experiences of people living in the distant past, we may use works of art, like Mazzoni’s grieving figures, to understand how people were expected to behave in emotionally charged situations. Works like this may provide clues into how men and women were expected to behave differently, as were people of different social classes. In Mazzoni’s work, it is the women who display their sorrow most forcefully. This is in keeping with renaissance understanding of women as more naturally emotional creatures, who were thought to be generally unable to moderate their behavior as well as men. We also see how emotional control was nuanced across social class. Of the women displayed, the aristocratic Duchess Eleonora as Mary Salome is the most restrained in her sorrow. A comparison between her figure and that of Mary Magdalen—the supreme example of an emotional woman in the Christian tradition—shows the duchess to be sorrowful, yet nobly restrained. Similarly, John the Evangelist is the most emotionally demonstrative of the men displayed. However, while the women beside him open their arms and mouths in expressions of sorrow, his hands are tightly woven together and his face in contorted into a tightly closed grimace. As a man, renaissance viewers would have understood John to be more capable of controlling his emotions than his female counterparts. Most restrained in his expression of feeling is Duke Ercole as Joseph of Arimathea. His head is softly tilted and his features are lightly strained in dignified grief.

As rulers, Ercole and Eleonora were expected to embody the nobility of their princely status and also be models of Christian piety. A Renaissance prince lived at the political and spiritual center of his community. He was both secular governor and spiritual shepherd for his people. In Ferrara, this closeness was reinforced by the direct physical relationship between the Este castle and the city’s cathedral located in close proximity to one another. 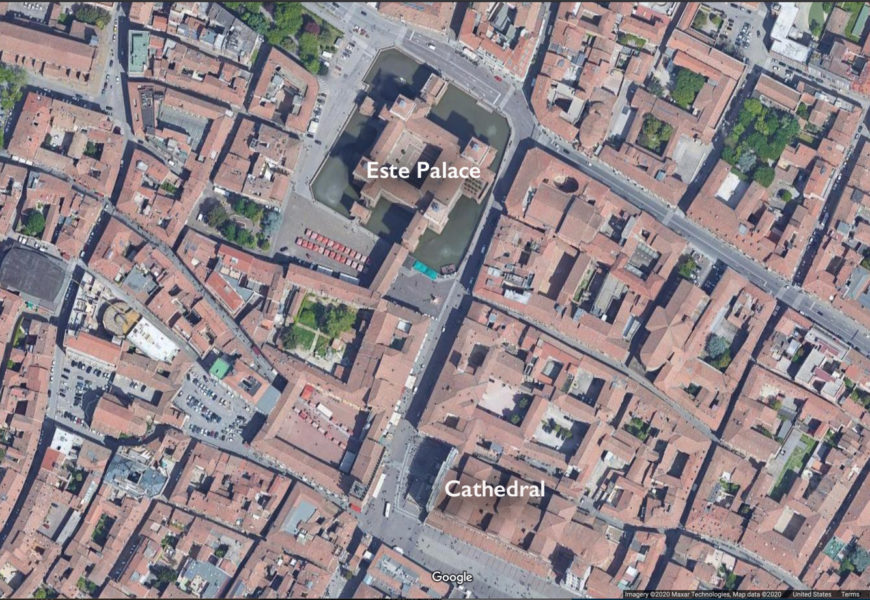 The Este Palace and Ferrara Cathedral were at one point in the same city square with one another. Over time, buildings have obscured the sight-line between the two.

Duke Ercole and the Duchess Eleonora are restrained and gender-appropriate models of grief in Mazzoni’s sculpture group. They embody fifteenth-century emotional behavioral ideals for their Christian community. Not only do they demonstrate rational emotional responses appropriate to the death of Christ, but their noble behavior served as a broader example of appropriate grieving for their subjects. They are models of moderation, soberly dressed in fine clothing, but not overtly magnificent; emotionally expressive, but not excessive in their demonstrations of sorrow. In Mazzoni’s skillful hands, Ercole as Joseph and Eleonora as Mary Salome are presented as ideal models of tasteful nobility and moderate emotion.

The history of emotions is a new and expanding field. Works of art populated by emoting human figures offer us one way to explore the emotional worlds of the past and, by doing so, may help us better understand our own emotional world. For many in the present-day, death is often sanitized and grief compartmentalized. Guido Mazzoni’s Lamentation reminds us that our mortality is a burden shared by all, that great sorrow—like great joy or great beauty—is a precious part of our humanity.

Read more about expanding our understanding of the renaissance on Smarthistory

Read more about Italian terracotta sculpture from the Victoria and Albert Museum, London

Read about another famous sculptor, the Florentine Luca della Robbia, who who worked in terracotta