Renaissance artists had contributed greatly to man’s knowledge by the time Galileo was doing his first work at Pisa. The humanist artists of the Italian renaissance had performed their own dissections to promote the study of anatomy, they had invented mathematical perspective to make possible the accurate, realistic portrayal of physical space. The literary humanists had managed to revive all sorts of classics, in particular the works of Plato. Christopher Columbus had directly challenged the limits to the finite European world of Ptolemy’s geography. In short, the bounds of human knowledge were expanding at a rapid rate. 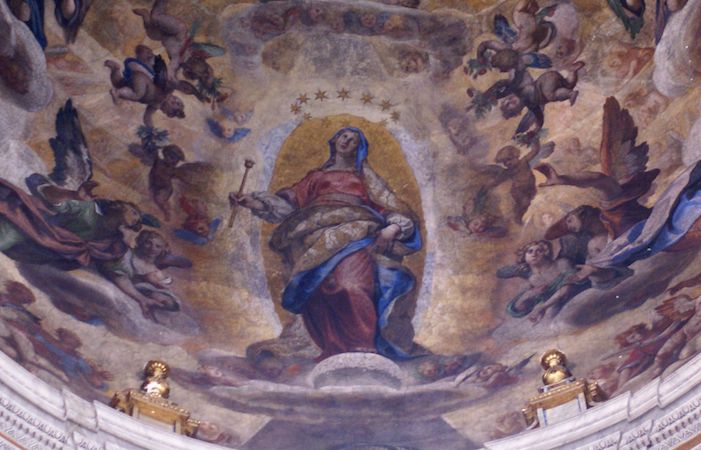 Thus it comes as no surprise that Italian artists of Galileo’s day responded favorably, even enthusiastically, to the new discoveries that science itself was making. It was Galileo’s friend, Lodovico Cigoli, who incorporated the latest discoveries of his telescope, hot off the press in Galileo’s Siderius Nuncius (1610) in his own version of the Assumption of the Virgin painted just two years later in 1612. In Cigoli’s painting, notice the treatment of the moon at the Virgin’s feet—rendered as though it were seen though the telescope, exactly as Galileo had recorded it in his own pen and ink drawing only a few years earlier.¹

Mathematics is the language of nature

In closing, how can we draw together all of the diverse strands of renaissance artistic realism, especially Brunelleschi’s discovery of perspective, with Galileo’s experiments on acceleration and his analysis of projectile motion?

It is clear that renaissance artists were seeking a new world, thanks in part to mathematics and the new perspective, literally, that mathematics provided. Galileo not only inherited this perspective, but a philosophical sense as well that had been inspired by renaissance philosophers (especially Neoplatonists), namely that the underlying reality of the world we perceive is essentially mathematical.

This was exactly the point made in Riccioli’s dramatic depiction of the hand of God, creating the world according to mathematical principles, number and weight and measure written clearly on his fingers to make no mistake about the inherent, essential mathematical character of the physical world.

Renaissance artists and architects had already succeeded in translating physical space into the mathematical terms of proportion and perspective to produce works that tricked the eye and rivaled nature.

Galileo used mathematics with equal skill to reveal the underlying structure of physical space and motion to show that these, too, could be reduced to mathematical analysis. In connecting physical space and real motion—which could be observed experimentally—with the ideal and uniform change of his neo-platonic, mathematical world, Galileo also serves to bridge the early stages of the scientific revolution in Europe—and figures like Copernicus and Kepler—with the later unifying achievements of Descartes, Newton and Leibniz.

Thus in a very direct way, it was mathematics that not only facilitated the art of renaissance perspective, but provided the key as well to Galileo’s new science of nature. In both cases, the essence of physical reality was understood in terms that could be reduced to basic mathematical principles.

Edgerton has argued that Cigoli’s moon was ‘no doubt inspired by one of Galileo’s original drawings, but a comparison between them immediately reveals that the painter did not, in fact, faithfully copy any of the drawings  or, for that matter, any of the engravings published in the Sidereus nuncius.’ In light of Cigoli`s professed difficulty with Latin, it is also unlikely that he relied on Galileo’s written description. We do know, however, that by early 1612 Cigoli was in possession of a telescope, through which, as he proudly informed Galileo, he saw the moon ‘very well.’ He may, therefore, have made his own drawings of the moon in conjunction with his work on the fresco, inspired by what he had learned from Galileo and perhaps, too, in an effort to corroborate his friend`s discoveries in the face of mounting criticism in Rome.

The Partnership of Art and Science: The Moon of Cigoli and Galileo

Cite this page as: Dr. Joseph Dauben, "Galileo and the science of nature," in Smarthistory, August 9, 2015, accessed February 3, 2023, https://smarthistory.org/galileo-and-renaissance-art/.