The relationship between art, gender, and power goes back centuries; it didn’t start with #MeToo. Cultural production, such as novels, paintings, or films, does not merely reflect the ideas of a single artist or a patron—it articulates and reflects the norms of a society. Art affects how people construct ideas about themselves, about their relationships with others, and about masculinity and femininity.

Take a painting from the exhibition The Renaissance Nude, Correggio’s Danaë. Set against a background of sumptuous embossed velvet drapery, a naked young woman reclines on two plump pillows, her head tilted as she winsomely observes her genital area, barely covered by a sheet. She is holding the edge of this fabric alongside the naked youthful Cupid. In his other hand, Cupid has caught two nuggets of gold, solidified droplets from the cloud that hovers over the center of the scene. Meanwhile, on the floor by the head of the bed, two little boys, whose wings allow us to identify them as amorini (little love spirits), concentrate on testing the tip of an arrow by rubbing it against a stone.

The focus of Danaë’s gaze is linked by the gold embroidery at the edge of the cloud that hovers at the top of the panel. Viewers with a knowledge of Ovid’s Metamorphoses would understand that we are witnessing Zeus, the king of the Olympian gods, rape Danaë in the guise of a shower of gold. The story goes that Danaë’s father, the king of Argus, was told by a prophecy that his daughter would have a child who would kill him, and so locks her up in a tall tower. As towers were no barrier to Zeus, Danaë gave birth to the hero Perseus nine months later.

A scene like this might be familiar, or even overly familiar, to viewers today—female nudes in mythological guises became very common in European art from the early sixteenth century onwards, and the naked bodies of goddesses like Venus, Diana, and the three Graces are common sights in major art museums globally.

In fact, visual access to real women’s bodies was strictly policed in the Renaissance, particularly in Italy. Even during marital sex, women were enjoined to always wear their undershirts: “What you are permitted to touch, you are not permitted to see,” explained the Franciscan preacher San Bernardino of Siena in a sermon of 1427.

As far as we can tell from the scant evidence surrounding the origins of Correggio’s painting of Danaë, it was most likely commissioned by a military leader, Federico II Gonzaga, the Marquis of Mantua. It was one of a series of four canvases showing the rape of beautiful mortals by Zeus. All four of these paintings by Correggio are extant: Ganymede, looking at the audience as he soars upward, clinging on to Zeus as an eagle; Io, swooning in the embrace of the god as a soft grey cloud; and Leda, who holds the god as a swan between her legs, his long neck nestled between her breasts.

Probably made as a gift for the Holy Roman Emperor and King of Spain, Charles V, these images call to mind the bawdy male bonding familiar in letters between male aristocrats of this period, letters that discuss sexual exploits and the subjugation of beautiful young women. More than this, in an era when vanquished cities were often personified as yielding women, it also aligns the sexual conquests of Zeus with the actual conquests of Charles V, who, by 1520, was head of the largest empire ever known.

Powerful men expressing their power through sexuality is a story we still recognize. In fact, the idea of the “male gaze,” first articulated by film historian Laura Mulvey, is useful for articulating the unstated gender dynamics in this type of image. This idea is not just about reflecting masculine views of the world, but also about outlining the perimeters of ideal behavior for women. Feminine beauty is equated in this image (and others like it) with passivity, submissiveness, and being a willing accomplice to one’s own oppression. In much of Europe in the Renaissance and early modern period, it was understood that one of the best outcomes for a victim of rape was to marry her attacker. It was also believed by many that female orgasm was necessary for conception, so pregnancy resulting from rape was at some level a sign of female acquiescence. These ideas have not gone away.

Danaë, locked in a tower by her father, escapes through being raped by Zeus; this could be a metaphor for the lived experience of many Renaissance women, whose choices were largely dependent on the men they were associated with. 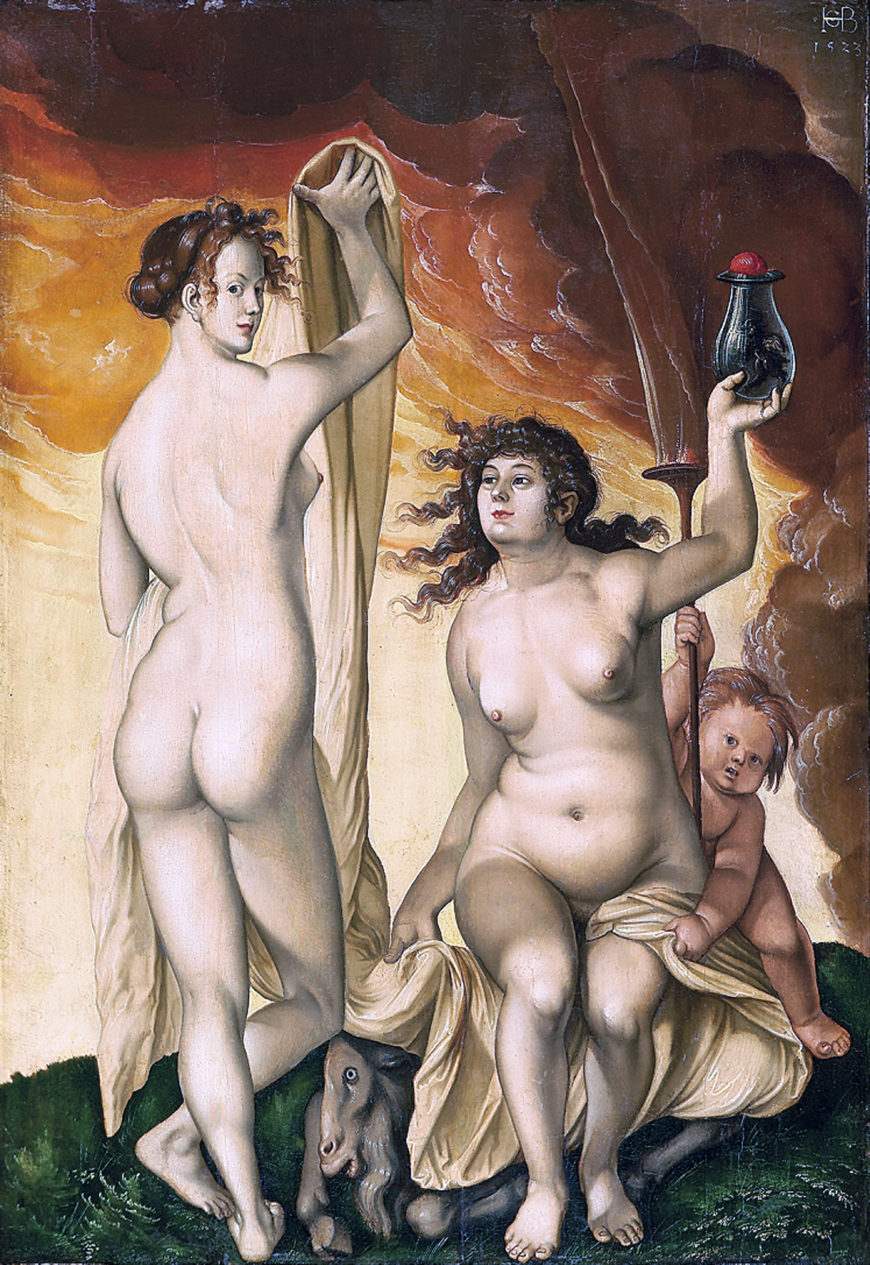 Not all paintings in the Renaissance Nude exhibition show women as the docile recipients of male predation. There are images of beautiful, passive young men, and dominant naked women too. Culture is not simple, and the reading of imagery is always complex. However, this exhibition does not merely expect us to bask in the beauty of images by old masters, but prompts audiences to look, and look again, at objects that may seem familiar to us, and to ask difficult questions about how culture feeds into stereotypes that can be profoundly harmful. Above all, it seeks to challenge long-held assumptions about the Renaissance nude.

This essay first appeared on the iris (CC BY 4.0)