During this period, and for hundreds of years, Italy was not a unified country, but rather was divided into many small countries we call city-states. Florence, Siena, Milan, Venice—these were essentially independent nations with their own governments—and they were at war with each other. These city-states also had independent cultures with their own distinct styles in painting and sculpture. Siena had a unique style that emphasized decorative surfaces, sinuous lines, elongated figures and the heavy use of gold. Duccio was the founder of the Sienese style and his work was quite different from the Florentine painter Giotto. Giotto emphasized a greater naturalism—creating figures who are more monumental (large, heavy and with a greater sense of accurate proportion).

Here is a contemporaneous description of the procession that brought this painting to Siena Cathedral (or Duomo):

At this time the altarpiece for the high altar was finished and the picture which was called the “Madonna with the large eyes” or Our Lady of Grace, that now hangs over the altar of St. Boniface, was taken down. Now this Our Lady was she who had hearkened to the people of Siena when the Florentines were routed at Monte Aperto, and her place was changed because the new one was made, which is far more beautiful and devout and larger, and is painted on the back with the stories of the Old and New Testaments. And on the day that it was carried to the Duomo the shops were shut, and the bishop conducted a great and devout company of priests and friars in solemn procession, accompanied by the nine signiors, and all the officers of the commune, and all the people, and one after another the worthiest with lighted candles in their hands took places near the picture, and behind came the women and children with great devotion. And they accompanied the said picture up to the Duomo, making the procession around the Campo, as is the custom, all the bells ringing joyously, out of reverence for so noble a picture as this. And this picture Duccio di Niccolò the painter made, and it was made in the house of the Muciatti outside the gate aStalloreggi. And all that day persons, praying God and His Mother, who is our advocate, to defend us by their infinite mercy from every adversity and all evil, and keep us from the hands of traitors and of the enemies of Siena. 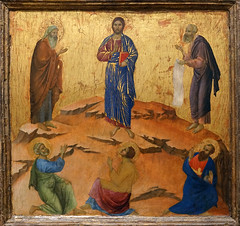 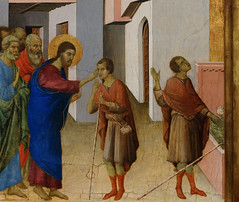 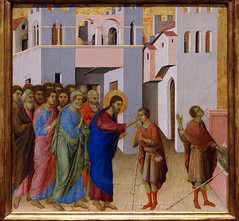 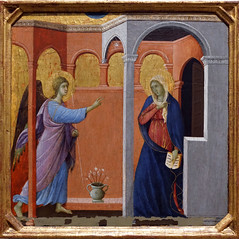 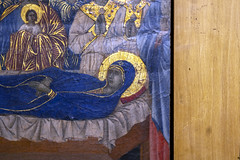 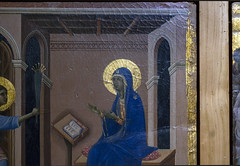 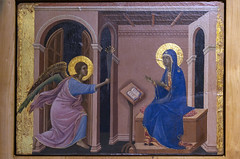 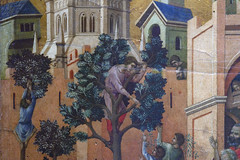