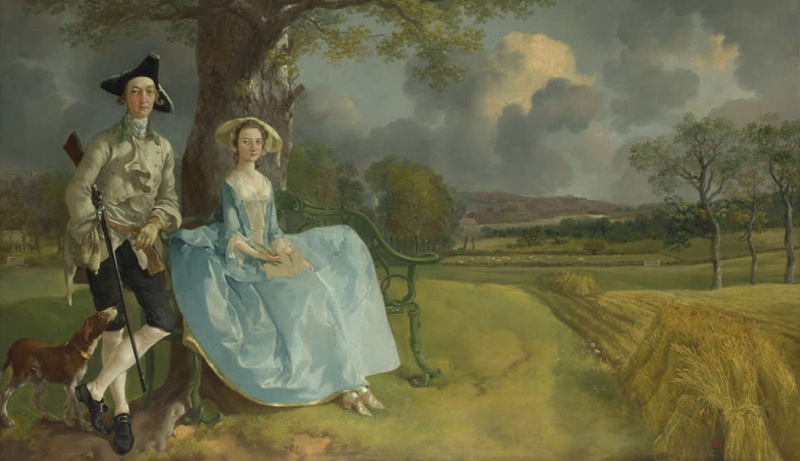 The same materialistic ideals which drive many men and women today have performed the same function throughout history. Those in positions of power often chose to commemorate their status through images. Some purchase works of art by famous artists to demonstrate their wealth, while others commission portraits of themselves as reminders of their prestige.

A young couple in the middle of the eighteenth century, Robert Andrews and Frances Andrews, opted for the second option to celebrate their marriage and subsequent combination of their families’ fortune. To depict their increased status, the Andrews’ commissioned a relatively unknown painter named Thomas Gainsborough to paint their portraits. Little could they anticipate that within a few decades it would be the artist, and not the subjects, that would make their portrait famous.

A conversation on canvas

Gainsborough’s portrait of the newly-married Robert and Frances Andrews is typical of the genre of “conversation pieces;” informal group portraits which gained popularity in the middle of the eighteenth century in England. Unlike the formal, straightforward portraits which characterized earlier periods and locations, the “conversation piece” usually presented a small group of individuals in an outdoor space, engaged in discussion and unaware of the viewer’s presence. Mr. and Mrs. Andrews diverts from that tradition, as its sitters are clearly reacting to Gainsborough’s presence, but their relaxed poses and location in the English countryside connects them to the “conversation piece” tradition.

At the time Gainsborough executed this painting, he was a 23-year-old emerging artist working in city of Ipswich in the rural English county of Suffolk. As a teenager he served an apprenticeship in London and also received instruction from Hubert-François Gravelot, a popular Rococo engraver working in England’s capital city. In 1749 Gainsborough moved with his wife to Ipswich, 70 miles from London and just 20 miles from his birthplace of Sudbury, in Suffolk County. Robert Andrews and his future wife, then known as Frances Carter, also grew up in Sudbury, in much wealthier families. In his portrait of the pair, Gainsborough captures the barely-veiled disdain in Frances Andrews’ eyes and her wry smile. She and her husband are well aware that the portraitist, whom they would have known since childhood, is well below them on the social ladder. 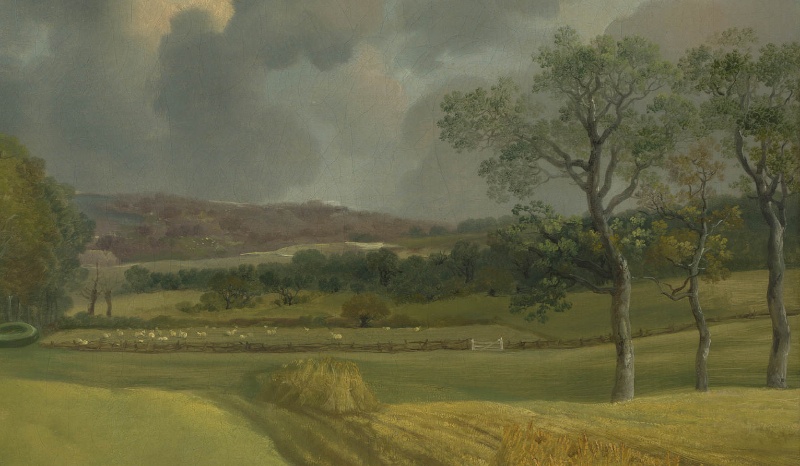 Following the “conversation piece” tradition, Gainsborough includes a landscape in his painting. However, he provides a much greater view of rural England than might be expected from such a work. Mr. and Mrs. Andrews pose on the left half of the canvas, rather than directly in the middle as was typical in a straightforward portrait. On the right side, Gainsborough gives equal attention to the grounds of The Auberies, the Andrews’ estate in Sudbury.

The couple is located on the edge of a field of wheat, and fenced in cattle populate the middle ground to the left while sheep graze to the right of the pair. Through the implementation of modern agricultural techniques and technology, Mr. Andrews has brought the land under his control. His pose is meant to suggest that his work is done and he can now relax and hunt with his dog, although he doesn’t look very comfortable holding his rifle.

The attention Gainsborough lavishes on the rolling English countryside reflects his lifelong love for nature. Although he became famous as a portrait painter, Gainsborough insisted throughout his life that landscape painting was his true calling, and he considered himself a landscape painter rather than a portraitist. He spent most of his career outside of London, the center of the English art world. After leaving Ipswich a decade after painting Mr. and Mrs. Andrews, Gainsborough set up shop in the resort city of Bath, where his delicate and sensual portraits defined the Rococo fashion in England in the second half of the eighteenth century.

The Rococo was a French style, imported by foreign artists like Hubert-François Gravelot and by English collectors. In the early 1700s England did not have a strong painting tradition, and its most famous artists were international painters who traveled to London to take advantage of that fact. Gainsborough looked to the frivolous, playful paintings being commissioned by French aristocrats, and applied their delicate style to slightly more reserved and contained subjects. 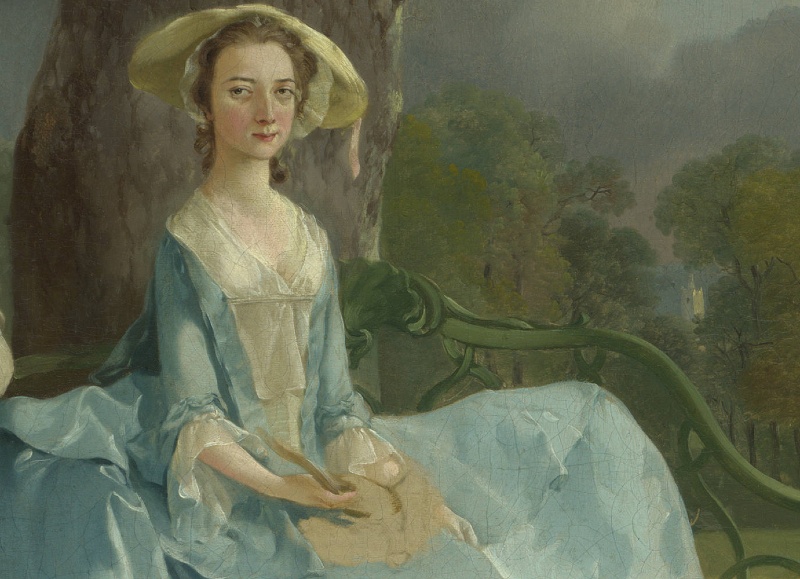 Although the Andrews purchased their conversation portrait from Gainsborough, something is missing from the work. Bare canvas surrounds Mrs. Andrews’ hands, folded in her lap. No one knows exactly what Gainsborough intended to paint in that space, if he intended to paint anything at all. Some scholars have suggested that Mrs. Andrews was meant to hold a dead game bird, the result of a successful hunting trip by her husband. Such an inclusion would emphasize the couple’s control over their land, but a bloody animal would ruin Mrs. Andrews’ elaborate dress, and therefore seems unlikely.

Another possibility for Mrs. Andrews’ lap is that the blank space was intended for a baby. Regardless of what was meant to go in that spot, Gainsborough never added it in. Modern scholars consider the painting to be “unfinished,” but we’ll never know what the original finished work was to look like, or if its current state was as “finished” as Gainsborough and the Andrews wanted.

Thomas Gainsborough: A Titian of the Eighteenth Century on ArtUK

This painting in The National Gallery

Gainsborough on the BBC’s Your Paintings

Gainsborough’s Show Box at the V&A