In 1785 visitors to the Paris Salon (the official art exhibition organized by the Academy of Fine Arts) were transfixed by one painting, Jacques-Louis David’s Oath of the Horatii. It depicts three men, brothers, saluting toward three swords held up by their father as the women behind him grieve—no one had ever seen a painting like it. Similar subjects had always been seen in the Salons before but the physicality and intense emotion of the painting was new and undeniable. The revolutionary painting changed French art but was David also calling for another kind of revolution—a real one? The story of Oath of the Horatii came from a Roman legend first recounted by the Roman historian Livy involving a conflict between the Romans and a rival group from nearby Alba. Rather than continue a full-scale war, they elect representative combatants to settle their dispute. The Romans select the Horatii and the Albans choose another trio of brothers, the Curatii. In the painting we witness the Horatii taking an oath to defend Rome. The women know that they will also bear the consequence of the battle because the two families are united by marriage. One of the wives in the painting is a daughter of the Curatii and the other, Camilla, is engaged to one of the Curatii brothers. At the end of the legend the sole surviving Horatii brother kills Camilla, who condemned his murder of her beloved, accusing Camilla of putting her sentiment above her duty to Rome. The moment David chose to represent was, in his reported words, “the moment which must have preceded the battle, when the elder Horatius, gathering his sons in their family home, makes them swear to conquer or die.” To tell the story of the oath, David created a rigorously organized painting with a scene set in what might be a Roman atrium dominated by three arches at the back that keep our attention focused on the main action in the foreground. There we see a group of three young men framed by the first arch, the Horatii brothers, bound together with their muscled arms raised in a rigid salute toward their father framed by the central arch. He holds three swords aloft in his left hand and raises his right hand signifying a promise or sacrifice. The male figures create tense, geometric forms that contrast markedly with the softly curved, flowing poses of the women seated behind the father. David lit the figures with a stark, clinical light that contrasts sharply with the heightened drama of the scene as if he were requiring the viewer to respond to the scene with a mixture of passion and rationality. An example of Neoclassicism

In beginning art history courses, the painting is typically presented as a prime example of Neoclassical history painting. It tells a story derived from the Classical world that provides an example of virtuous behavior (exemplum vertutis). The dramatic, rhetorical gestures of the male figures easily convey the idea of oath-taking and the clear, even light makes every aspect of the story legible. Instead of creating an illusionistic extension of space into a deep background, David radically cuts off the space with the arches and pushes the action to the foreground in the manner of Roman relief sculpture. Before Oath of the Horatii, French history paintings in a more Rococo style such as Jean-François-Pierre Peyron’s Death of Alcestis (1785) involved the viewer by appealing to sentiment and presenting softly modeled graceful figures. David acknowledged that old approach in the figures of the women in Oath of the Horatii, but challenged it with the starkly athletic figures and resolute poses of the men.

Going back to Poussin Before composing Oath of the Horatii, David went to see Poussin’s Rape of the Sabine Women and employed the lictor, the caped man, on the far left as the basis for the Horatii and he directly quoted other figures from Poussin as well. Even though Poussin was his model, David knew that he was creating a new type of painting and wrote, “I do not know whether I shall ever paint another like it,” as he developed the austere composition and powerful physiques. Personal sacrifice for an ideal

Today the painting is typically interpreted in the context of the French Revolution and David’s own direct involvement as a revolutionary. The exact source of the scene that inspired David is in doubt but it is important to art historians because it can offer clues as to David’s intentions for the picture.

In the nineteenth century a former student of David identified the source as the 1640 play Les Horaces by Corneille that David had seen in Paris in 1782. The difficulty is that no scene of an oath occurs in Corneille’s script. However, toward the end of the play, a minor character comes on stage bearing the three swords of the defeated Curatii. This stage direction as well as other contemporary productions and images related to the story of Horatii in particular—and oath-taking in general—may provide the background for David’s decision to paint the moment when the brothers take their oath to defend Rome—an act of personal sacrifice for a political ideal. With this in mind, we can understand how one might read Oath of the Horatii as a painting designed to rally republicans (those who believed in the ideals of a republic, and not a monarchy, for France) by telling them that their cause will require the dedication and sacrifice of the Horatii. Those who support this view cite some of the rousing lines from Corneille’s tragedy such as, “Before I am yours, I belong to my country,” as well as the response of contemporary left-wing writers who praised David’s republican sentiments. Those who disagree with this interpretation argue that David was enmeshed in the system of royal patronage, that the painting was accepted into the Salon with no negative response from official quarters and later royal commissions followed.

In the succeeding decades French painters responded again and again to David’s transformative painting. Paintings such as Gros’ Napoleon Bonaparte Visiting the Plague-Stricken (1804), Gericault’s Raft of the Medusa (1819), Delacroix’s Liberty Leading the People (1830), and even Courbet’s Burial at Ornans (1849) confront the Oath of Horatii as they embrace or reject David’s aesthetic and, perhaps, political revolution.

This painting on Google Arts and Culture

Dorothy Johnson, “Corporality and Communication: The Gestural Revolution of Diderot, David, and the Oath of the Horatii.” Art Bulletin 71 (March 1989), pp. 92–113. 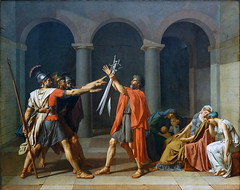