Born near the town of Vinci in 1452, Leonardo trained in the Florentine workshop of Andrea Verrocchio (1435-88). His first masterpiece was the unfinished Adoration of the Magi (1481, Uffizi, Florence). In 1481-2 he travelled to Milan to work for the Duke, where he painted the Virgin of the Rocks (Musée du Louvre, Paris-a later version exists in the National Gallery, London) and the Last Supper (1495-7; Convent of Santa Maria delle Grazie (Refectory), Milan). In 1499 he travelled to Mantua and Venice, arriving back in Florence in 1500. 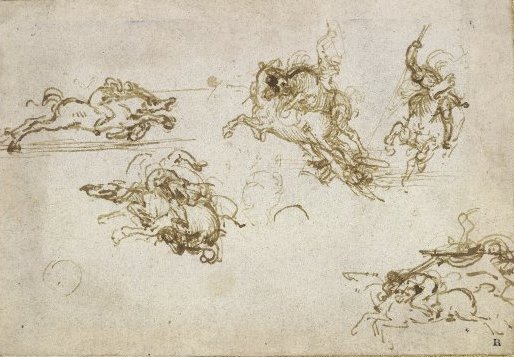 In 1503 he began the cartoon of the Battle of Anghiari  with its scenes of ferocious fighting for the wall in the Great Council Chamber of the Palazzo Vecchio, but this work was never completed. He returned to Milan in 1506 for seven years and in 1513 he moved to Rome. The French king, Francis I, invited him to his court and about 1516, Leonardo settled in the manor of Cloux, near Amboise in the Loire valley. Leonardo died there in 1519.

Leonardo is arguably the greatest draughtsman in Western art. He was technically superb in whichever medium he used: silverpoint, pen and ink, black and particularly red chalks. Driven by his scientific curiosity, he studied the world around him in minutest detail, making botanical and anatomical studies. In his drawings and paintings he created figures which lived, breathed, moved and gave expression to their emotions. 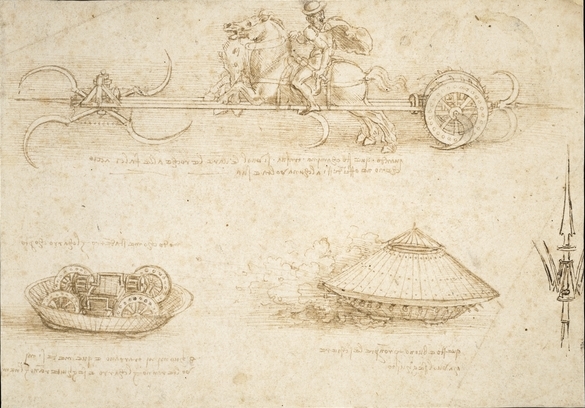 This is one of a number of sheets of drawings by Leonardo in which he designed instruments of war. He drew them while working for Ludovico Sforza, duke of Milan (1494–99). Under each drawing in ink and brown wash, Leonardo has written words of explanation in his characteristic reversed writing (that is it needs to be read in a mirror).

At the top of the sheet is a chariot with scythes on all sides. Below it Leonardo has written: “when this travels through your men, you will wish to raise the shafts of the scythes so that you will not injure anyone on your side.” At lower left is an upturned armored car without its roof, showing “the way the car is arranged inside” with the line “eight men operate it and the same men turn the car and pursue the enemy.” At lower right, the same tank-like vehicle is shown moving and firing its guns, with the line below: “this is good for breaking the ranks, but you will want to follow it up.” At the far right is a more conventional weapon of the time, a large pike or halberd, perhaps more ceremonial than practical.

Leonardo’s fertile imagination and scientific knowledge are here combined in the creation of war machines for his warlike patron. It is highly unlikely, however, that any of these machines were ever made or used in contemporary warfare. Indeed, as Leonardo himself wrote in his Notebooks, such new weapons were often as dangerous to their users as to the enemy.

Cite this page as: The British Museum, "Leonardo and his drawings," in Smarthistory, March 1, 2017, accessed January 24, 2022, https://smarthistory.org/leonardo-and-his-drawings/.