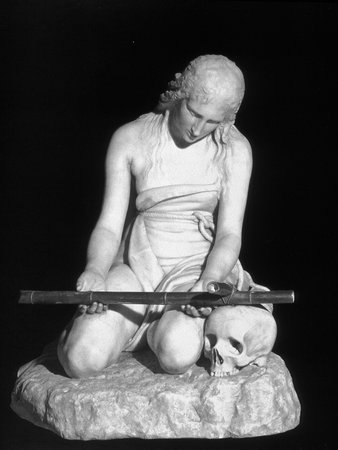 Antonio Canova (1757-1822), the great Neoclassical sculptor, left a truly prodigious body of work, much of it portraiture or mythological in subject matter or, not infrequently, as in Paolina Borghese as Venus Victorix and Napoleon as Mars the Peacemaker, a mixture of the two. Religious works by him are comparatively rare, though, the most celebrated being The Penitent Magdalene. The first version, completed for a private patron between 1794-6, is in the Museo di Sant’Agostino in Genoa, the second, dated 1809, is housed in St. Petersburg’s Hermitage Museum. Heralded as Canova’s greatest work at the time, indeed “the greatest work of modern times” according to the novelist Stendhal, the sculpture obviously struck a chord with contemporary audiences. Though undoubtedly a very moving work of art, a modern viewer might be tempted to ask why such gushing praise?

The subject was commissioned by a Venetian churchman, Guiseppi Pruili, presumably for devotional purposes. In 1798 the work was sold and passed into the hands of Giovanni Sommariva, a flamboyant Italian politician who enjoyed a close relationship with Napoleon. Having made the purchase, he converted a room in his Parisian house specifically to accommodate the sculpture, “half chapel, half boudoir, furnished in violet and lit by an alabaster lamp hanging from the cupola,” as one contemporary, Francis Haskell, described it. In 1808, Sommariva had the sculpture exhibited at the Salon in the Musée Napoleon, today’s Louvre, where it created a ‘miraculous’ effect on all who saw it.

A large part of its huge appeal, which bordered on mania, must have been due to the political and religious sensitivities of the time. In terms of the latter, since the Revolution of 1789, France had effectively been a de-christianized state: church land was confiscated, religious images destroyed and tens of thousands of priests forced to abdicate. In 1801, however, Napoleon as First Consul signed a Concordat (an agreement between the Pope and a sovereign state on religious matters), which largely, though not wholly, restored the Catholic Churchs’s pre-Revolution status. That a contemporary religious work by so celebrated a sculptor was being shown in a Salon organized by the French state would have served as a powerful visual reminder of the new role of religion in public affairs.

Just as important, one suspects, is the figure herself, Mary Magdalene mourning the loss of her beloved Jesus. It is a stark and striking image of grief, the painful reality of which in the early 1800’s most households across France were no doubt all too familiar. For decades the country had been at war, first in those turbulent Revolutionary years and then under the leadership of Napoleon, whose military campaigns cost the lives of millions. Having paid such a heavy toll, one imagines that by 1808 the country had had its fill of neoclassical allegories that glamorized war. They knew the true horrors of it well enough and so it is hardly surprising then that Canova’s gentler, more consoling image was met with such enthusiasm.

The legend of Mary Magdalene 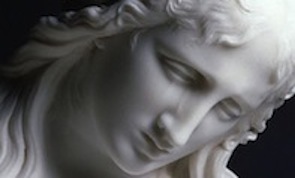 A witness to the Entombment and the first to see Christ after the Resurrection, early theologians present Magdalene as the most devout of all of Christ’s followers and an important early Christian leader. In later years, although nowhere in the Bible does it say so, in art and literature she has conventionally been depicted as a repentant prostitute. To atone for her sins, legend has it that after Christ’s death she left the Holy Land and spent thirty years in a desert in Provence, hence the widespread veneration of the saint in France. Canova was obviously well versed in the story, showing Magdalene as a beautiful young woman dressed like a hermit, sitting on a rock and accompanied by the requisite crucifix and skull. 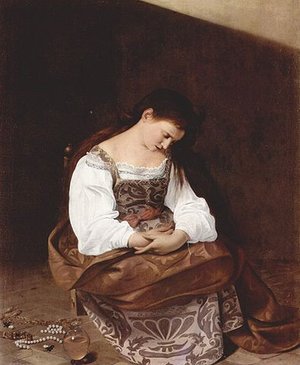 Her downcast, kneeling figure has drawn comparisons with Caravaggio’s Penitent Magdalene, which Canova would have seen in Rome. In both, her kneeling posture emphasises humility, a word originating from the Latin humus or ‘ground.’ The same cradling gesture is also invoked, as though spiritually she is there on Golgotha, cradling the body of Christ as the other Mary is shown cradling her dead Son in the pietà.

Like Caravaggio, also, in the helpless, grief-stricken figure that leans to one side, to the point almost of collapse, we see here not a Classical ideal of beauty but an emotionally and dramatically expressive image, reflecting a highly refined naturalism.

The sculpture proved so popular that a copy was commissioned, now in the Hermitage collection. For whatever reason, the gilt bronze cross is missing in this version and perhaps benefits from the omission, the upturned, empty palms evoking both Magdalene’s submission to the will of God and her sense of spiritual abandonment, aware that these hands, the same that had anointed the feet of Christ with perfumed oil, will never touch Him again. 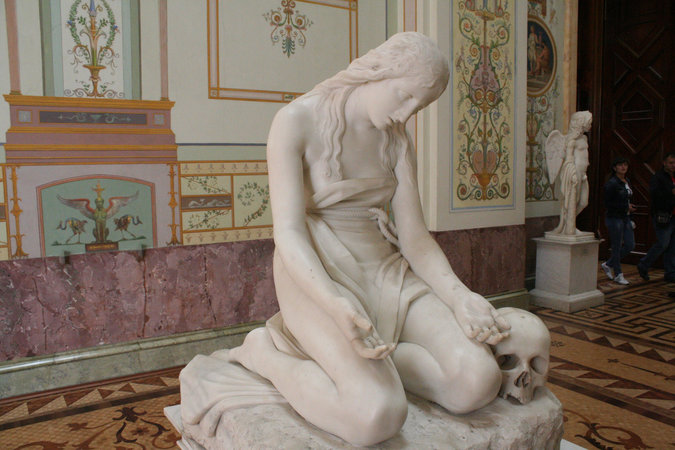 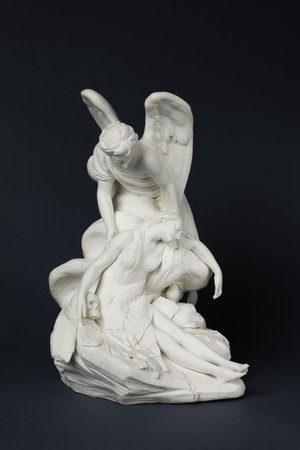 For all its popularity, however, Canova himself thought little of the work, its tumultuous reception in Paris reaffirming his low opinion of French taste, still contaminated in his mind at least by the weak sensuality of the Rococo. A generation earlier, perhaps the greatest of all Rococo sculptors, Étienne-Maurice Falconet, had presented a more fantastical version of the penitent saint in his porcelain Fainting Magdalene who swoons extravagantly into the arms of an angel.

Though Canova’s work is far less cluttered and both formally and psychologically exhibits more restraint, we find a similar hint of eroticism in the depiction of the female form, her garment on the point of slipping down to reveal her breasts, indeed when viewed from behind, has slipped entirely to reveal the round of her back with those thick locks of hair spilling down it. Here that submissiveness noted earlier takes on a sexualized character, which, as with so many celebrated depictions of women at this period, in servicing male fantasies of power, not only reflected but arguably helped maintain those gender inequalities.

Whether attributable to the beauty of the thing or to its historical importance, Canova’s Magdalene resonated with the French public for years to come. Three decades on, for instance, we find her interceding for the souls of the damned in Henri Lemaire’s pediment sculpture for the Church of La Madeleine. Distinguished from the ‘saved’ whose bodies are modestly concealed, except for the suckling mother to the far right, Magdalene, kneeling at the foot of Christ, is half undressed, like the ‘damned’ themselves, who are mostly male. The contrast between feminine virtue (clothed) and feminine vice (naked) is all too evident; and so too, perhaps, the Madonna/Whore complex that underpins the image, a psychological condition in which men perceive women as either madonnas to be protected or whores to be punished, a somewhat hellish situation as Freud explained, “Where such men love they have no desire and where they desire they cannot love”. The prevalence of this unfortunate habit of mind might also account, to some extent at least, for the popularity of Canova’s work in the early nineteenth century and, indeed, for our continued fascination with Magdalene herself. 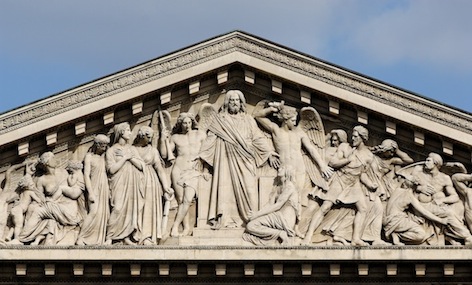 The various lives of Mary Magdelene from the BBC