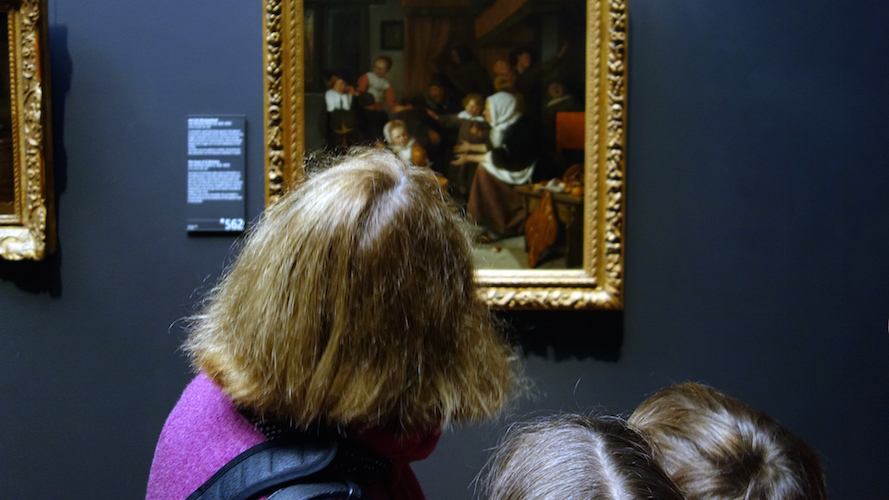 A holiday for children 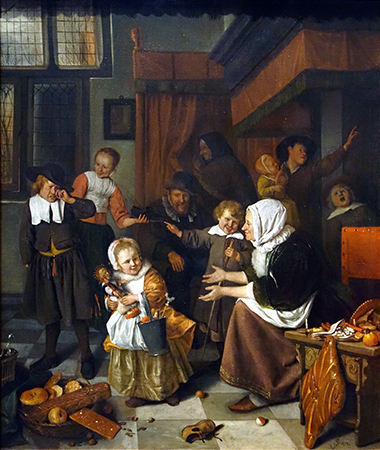 In this delightful scene, Jan Steen beautifully captures the joys of a family gathering together in their home to celebrate the Feast of St. Nicholas, still one of the most important holidays on the Dutch calendar. The holiday falls on December 6th and is especially devoted to children.  In the Netherlands, on the night before the feast, St. Nicholas travels on horseback over rooftops accompanied by his helper, Zwarte Piet (“Black Peter”), whose name comes from his being covered in soot from the chimneys used to access Dutch homes. Children place their shoes on the hearth and hope to find them the next morning filled with presents and other delectable treats. Families sing songs in honor of the saint and share an abundance of candies, specially baked breads, and sweet biscuits.  It is a day full of fun and surprises and even a bit of mischief.

A master visual storyteller, Steen incorporates many of these traditions in his painting while also expertly representing the actions and expressions of the children in this middle class family as they react to the morning’s events. 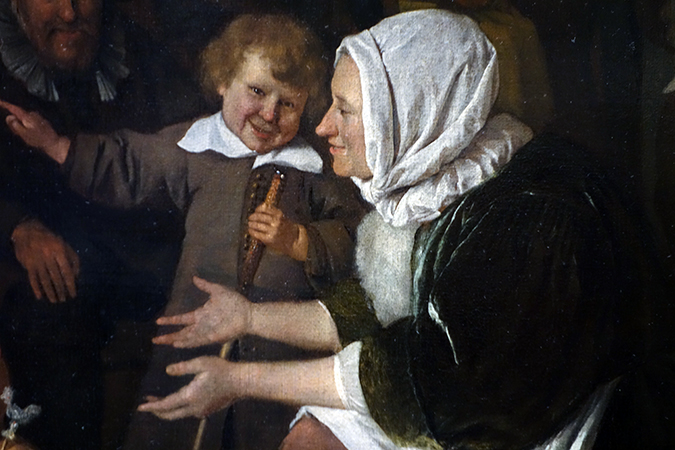 Mother (detail), Jan Havicksz Steen, The Feast of St Nicholas, 1665-68, oil on canvas, 82 × 70.5 cm (Rijksmuseum) A smiling mother reaches out to her daughter who clings possessively to the gift she has received: a doll clad in white fur with a halo and holding a cross-shaped staff, which represents St. John the Baptist. On the child’s arm, a pail hangs full of goodies including an orange, a gingerbread figure, and a sugar candy chicken on a stick. 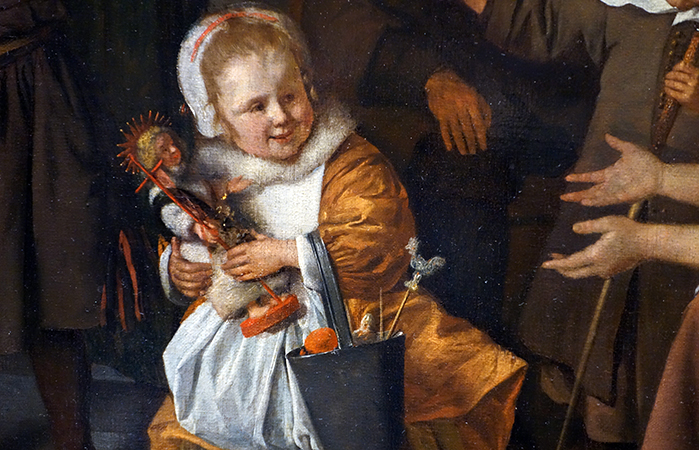 Daughter (detail), Jan Havicksz Steen, The Feast of St Nicholas, 1665-68, oil on canvas, 82 × 70.5 cm (Rijksmuseum) The girl’s brother, behind her to the right (see image above), also seems quite pleased with his gift, a kolf club and ball.  A game analogous to modern hockey, kolf was played on frozen canals in the winter and on level land in summer. Players both young and old enjoyed propelling a small wooden ball toward a goal post using sticks that were curved at the end like the one we see here.  In fact, this popular game often appears in seventeenth-century Dutch winter scenes by artists such as Hendrick Averkamp (see below). 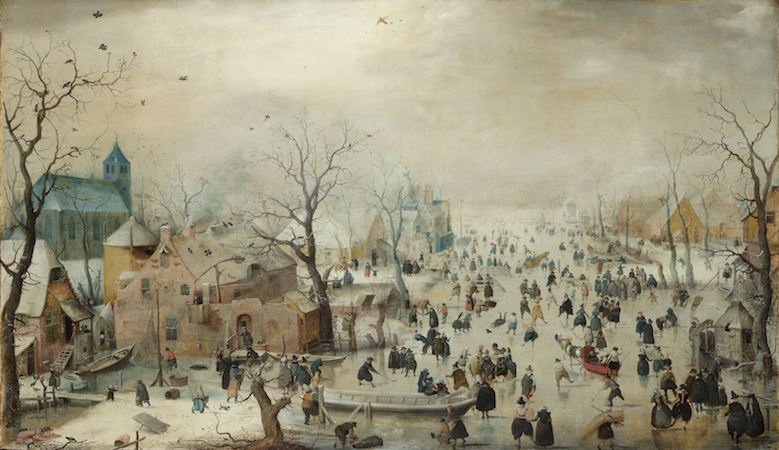 The boy laughs and points to a shoe held by a young maidservant. The shoe contains birch switches that were used to punish naughty children. Clearly, a tearful boy, to the maidservant’s right, received the shoe as a not-so-desirable gift for his poor behavior. 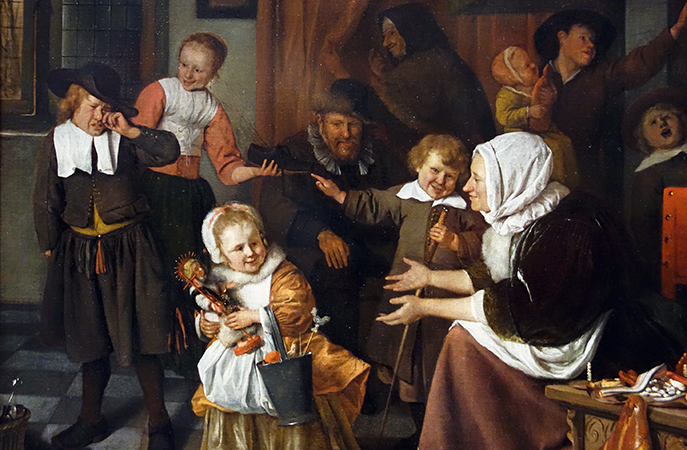 His grandmother, however, beckons him toward the bed in the back of the room, where it appears that she has discovered a better gift hidden behind the bed curtains.  On the right side of the scene, three additional children gaze with wide-eyed amazement toward the chimney through which their presents were delivered. An older brother holds up a toddler for a better view. The toddler hugs a gingerbread version of St. Nicholas, a reminder of who is being honored on this joyous occasion. 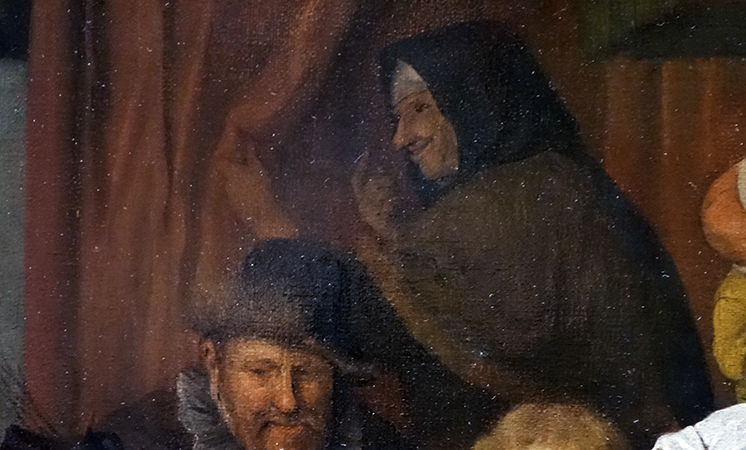 In the foreground of this domestic interior, Steen tempts us with an assortment of treats piled high in a woven basket and strewn across the seat of an ornately carved chair.  Here we see apples, nuts, sugared candies, waffles and other baked delights of various shapes and sizes. Particularly impressive is the large, richly decorated diamond-shaped loaf that leans against the chair. This sweet white bread, called a duivekater, was traditionally enjoyed at the Feast of St. Nicholas, as well as at Christmas, and on the Dutch New Year.

The Christian Saint Nicholas, or as the Dutch call him, Sinterklaas, was a fourth-century Bishop of Myra (a town located in modern day Turkey) who was known for his generosity and kindness especially to children. He died on December 6th in 343 C.E., and it is this day that is commemorated. Although traditionally a Catholic holiday, the Feast of St. Nicholas survived in the Protestant Netherlands, although in a secularized form to be celebrated by all. 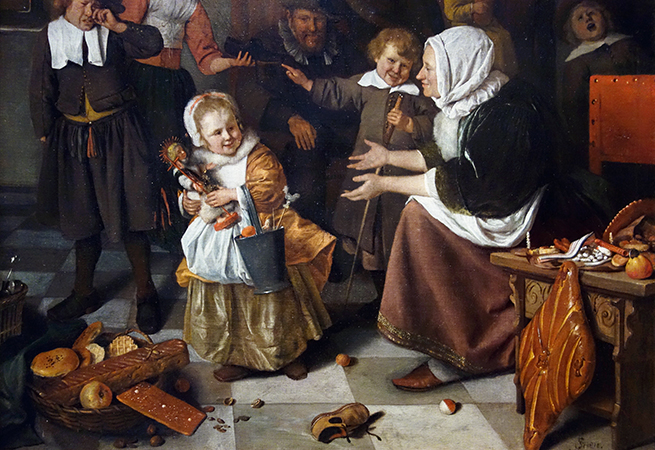 This charming scene of family is a fine example of the type of painting that Jan Steen is best known for. In addition to holiday gatherings such as this, his other works include representations of school life, rowdy taverns, love-sick women, and dissolute households. Steen fills his scenes of everyday life with engaging details, presenting them in a direct and amusing way. While he finds some inspiration in the theater, Steen relies as well on his keen wit and narrative ability to capture, and in some cases, even ridicule human nature in a good humored and entertaining manner. An especially versatile artist, Steen was also a talented painter of biblical and mythological subjects as well as portraits. With some 300 paintings to his credit, Steen leaves a legacy as a comic genius and one of the most prolific Dutch painters of the seventeenth century.

This painting at the Rijksmuseum

Jan Steen on the BBC’s Your Paintings