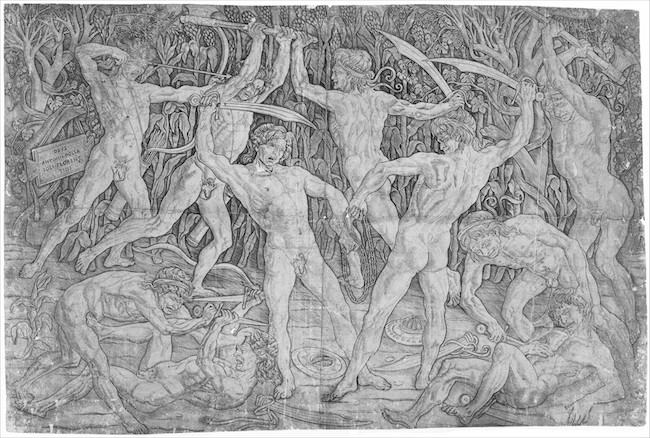 Antonio Pollaiuolo’s Battle of Ten Nudes has been called the single most important engraving in European history. Clearly based on classical antiquity (the cultures of ancient Greece and Rome), the print is monumental in size (approximately 15 x 23 inches) and, because of its shallow space, resembles ancient Roman relief sculpture. In the picture, five men wearing headbands fight against an equal number of men without headbands.  The battle is set in front of a wall of lush vegetation. 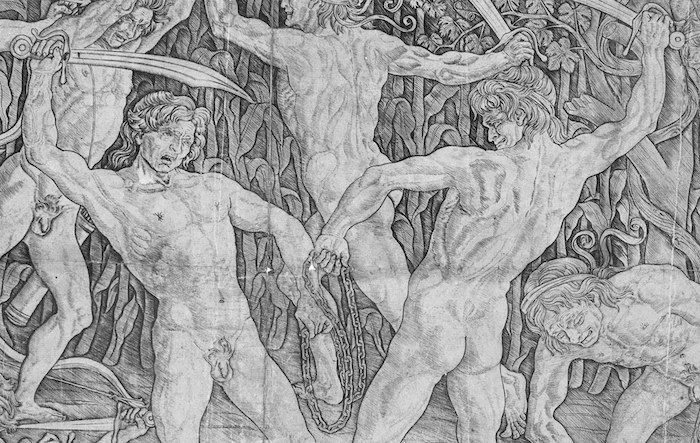 Art historians disagree about whether the print depicts a particular scene from mythology or classical history, but some have suggested that it simply shows gladiators. This is because in the central pair, the men are gripping a chain, a common weapon of gladiatorial combat. 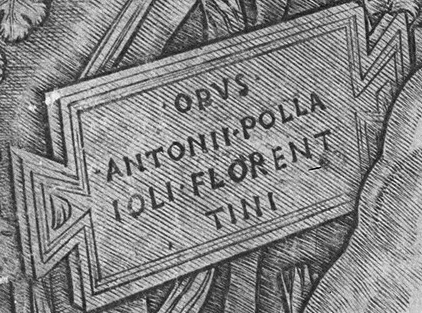 The print is exceptional for many reasons. To begin with, over fifty copies of it exist, an extraordinarily high number for a work of art over 500 years old. Additionally, it is believed that Pollaiuolo engraved the print completely by his own hand, and for this reason, the sign set in the far left of the vegetation bears his name (most often the artist’s composition would be engraved by a printmaker).

Pollaiuolo’s print is, however, important mostly because it shows a new conception of the human body.  As many art historians have noted, the Renaissance started much earlier in the fields of sculpture and architecture than it did in painting and drawing.  So although Donatello had created his nude David decades earlier, the nude had yet to be mastered in a two-dimensional form.  Not everyone was taken with Pollaiuolo’s print, and it is believed that Leonardo da Vinci criticized it, saying that the bodies looked like “bags of nuts.” Pollaiuolo’s nudes may be overly muscular, but they were probably the most naturalistic human bodies created in Italy up to that point. 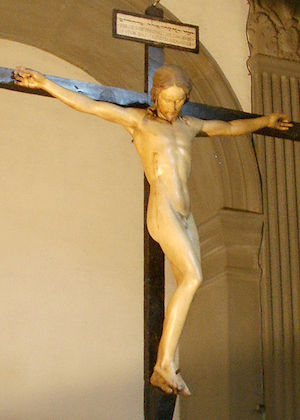 Vasari, the great sixteenth-century Florentine artist and art historian, wrote that Pollaiuolo’s understanding of the nude body resulted from his dissection of cadavers. This became a common practice in Florence, and it is reported that a sculpture of the crucified Christ in Santo Spirito was a gift from a very young Michelangelo to the priest there, who basically let him rob graves for the purpose of dissection.

Pollaiuolo’s bodies are also derivative of ancient Roman art, an indication that he was looking at the classical past for inspiration, an essential hallmark of the Renaissance.

Because Pollaiuolo was trained as a goldsmith (this was true of many artists of the Renaissance including Ghiberti and Brunelleschi), he was very skilled in working with metal.  Apart from its conception of the nude, the print also showcases the artist’s technical ability, especially in the modeling, or contouring of light and dark, used to create volume in the men’s bodies. 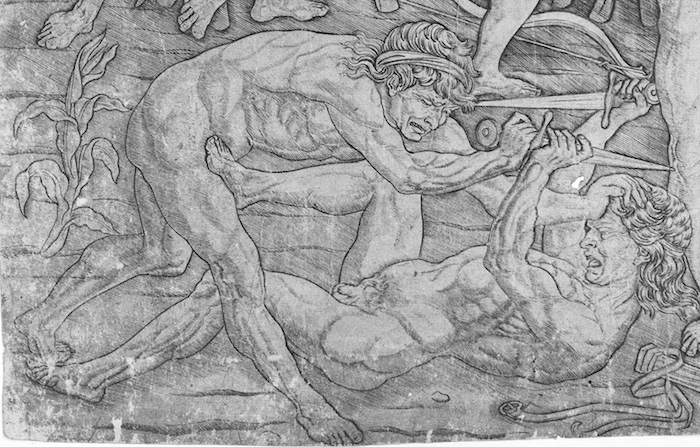 Although to the modern viewer, the fight between the ten men may look stiff and posed (although, a particularly vivacious passage can be found in the bottom left hand corner, where the man on the ground fiercely strains against the man pressing his head into the ground), later works by Michelangelo and Leonardo owe much to it.  It is impossible to think that either Michelangelo’s Battle of the Centaurs (below) and Battle of Cascina or Leonardo’s Battle of Anghiari could have existed without the prototype of Pollaiuolo’s Battle of Ten Nudes. 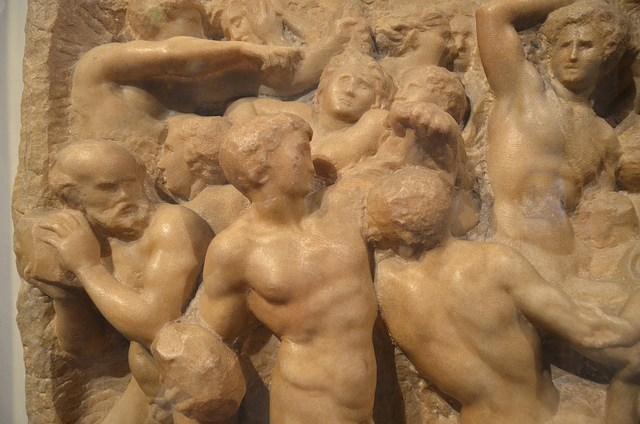 This print is an engraving. That means that with a sharp tool, Pollaiuolo scratched the drawing into a sheet of metal. Ink was then applied to the metal surface and subsequently wiped off, leaving only the incised lines filled in. A piece of moist paper was then set over the plate, which was sent through rollers so that the wet paper could “suck up” the ink. At the end, the sheet of paper was peeled off, and the image that resulted was the mirror image of what Pollaiuolo drew.

In fact, art historians have identified that two stages of the print actually exist. This means that at some point, the metal plate wore down, and the artist had to recarve some of the details back into the plate. The result is that, over time, two different images were pulled from Pollaiuolo’s one plate.

Because prints were collected like modern day baseball cards, engravings of The Battle of Ten Nudes ended up all over Europe, and many other artists copied it.  Although people in other parts of Europe might read about the great sculptures and buildings being constructed in Florence, Pollaiuolo’s print was an actual piece of the Florentine Renaissance that they could hold in their hands. Prints like this did much in helping to spread the Renaissance throughout Italy and to the rest of the world.


This print at the British Museum