Ferrer Bassa and the murals of Pedralbes
Hebrew Bible

Elevation of the Cross
The Rape of the Daughters of Leucippus
The Presentation of the Portrait of Marie de' Medici
Arrival (or Disembarkation) of Marie de Medici at Marseilles
The Apotheosis of Henry IV and the Proclamation of the Regency of Marie de’ Médici
Venus, Mars and Cupid
The Consequences of War
Rubens and Isabella Brant in the Honeysuckle Bower

In Vicenza, a town near Venice, a unique Renaissance theater has miraculously survived for over four centuries. A hidden gem built inside an abandoned fortress and prison, Teatro Olimpico gives form to the period’s knowledge of classical Roman architecture and puts into practice contemporary artistic developments like linear perspective.

The humanist theater and the new Renaissance stage 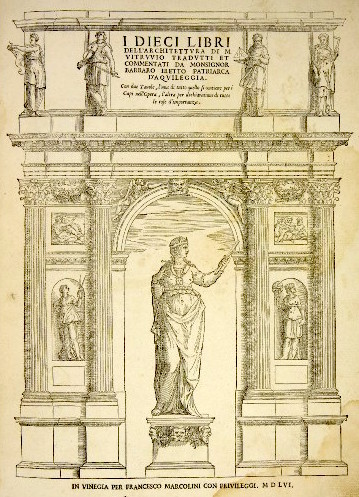 Italy of the sixteenth century witnessed the rising popularity of the theater as a cultural form and as a mode of entertainment. Theatrical productions had existed throughout the Middle Ages, but consisted mostly of religious enactments staged on temporary platforms in outdoor spaces, like town squares.

With the emergence of humanist culture in fifteenth-century Italy, developments in theatrical architecture and design went hand-in-hand with literary models that sought to reinstate the comedies and tragedies of ancient Rome. But architects interested in studying Roman art faced a problem: the celebrated theaters of ancient Rome had been dismantled or transformed into utilitarian spaces throughout the Middle Ages. Luckily, Renaissance architects were able to study the writings of the ancient Roman architect Vitruvius, whose Ten Books on Architecture explained how to construct a theater and described set decoration. A widely influential text, Andrea Palladio himself illustrated the first Italian translation of Vitruvius’ architectural treatise. From these books and the study of ancient ruins, Renaissance architects were able to form an image of classical Roman theaters. These theaters had a semicircular seating section, or auditorium, and an elaborate stage background called a scaenae frons.

At the same time that Renaissance artists were studying classical architecture, pictorial developments like linear perspective made their way into the theatrical stage of the sixteenth century—often in the form of painted backdrops displaying a city view. This innovation introduced a departure from the medieval stage, which had featured a row of scenographic houses representing Biblical locations. Whereas classical and medieval theatrical productions were free, popular events, the Italian Renaissance theater was a sheltered space of enclosure constructed for courtly elites and associations of erudite intellectuals.

Palladio was the most influential Renaissance architect. He was also a founding member of the Academia Olimpica—a group of scholars in Vicenza who sought to recreate the theatrical productions of classical antiquity. Though the Teatro Olimpico is the oldest surviving Renaissance theater, it was not the first permanent theater of the period. It was also not the first built by Palladio, who had previously designed theaters in Venice and Vicenza. The Olimpico was, nonetheless, his most ambitious theatrical project, and one that would put into practice his knowledge of classical architecture and contemporary art. 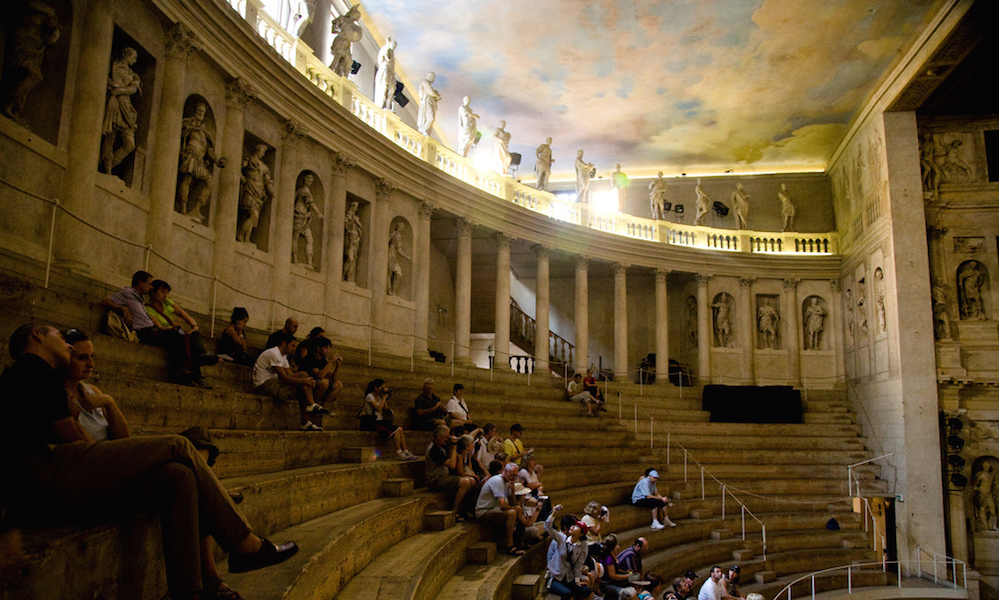 The Olimpico was not a theater built anew. Palladio designed his Roman-inspired auditorium inside an abandoned fortress. Refashioning an existing building forced the architect to adjust his plans. As a result, and unlike Roman theaters, Palladio’s seating area forms an elliptical curve rather than a semicircle. A highly decorated space, the curved auditorium is crowned by a columnated portico that is adorned with classically-inspired sculptures. 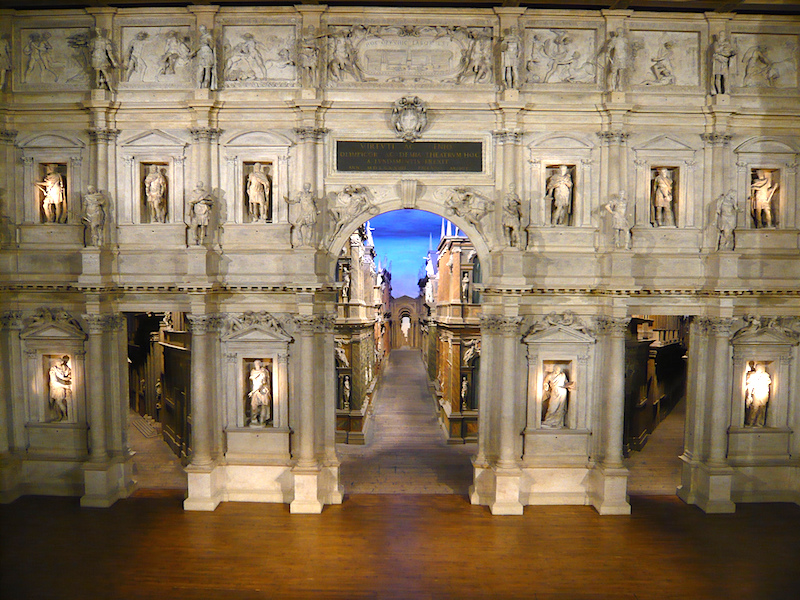 The Teatro Olimpico’s stage features a magnificent three-tier façade or scaenae frons. Profusely decorated with classical columns, pediments, sculptures, and reliefs, the façade has five openings, of which the central one evokes a triumphal arch. Palladio and Vicenzo Scamozzi worked with limited materials—using wood, plaster, and stucco to create the effect of white, polished marble. The openings grant visual access to projected avenues, conveying the appearance of a city. Constructed using linear perspective, the passageways heighten the illusion by using forced perspective, which increases a fictional sense of depth—so an actor walking into the receding scenography would look like a giant in relationship to the buildings. 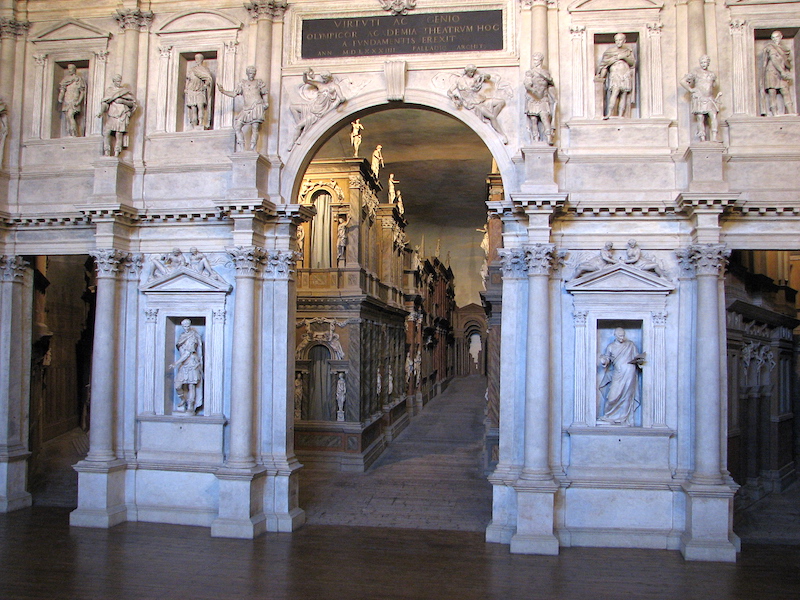 The perspectival passageways are a hallmark of the Olimpico, but their origins are unclear. Palladio died years before the grand opening of the theater, at a time when the inaugural performance was expected to be a pastoral comedy written by Fabio Pace. It was not until 1583, three years after Palladio’s death, that the Academia made the decision to perform the tragedy Oedipus King instead. This change required scenography depicting a cityscape instead of a landscape, and it is at this time that the Academia purchased the additional real estate required for the projected avenues. Scamozzi completed the construction of the auditorium and added the stage design, though perhaps following drawings produced by Silla, Palladio’s son and assistant. Whether they were the product of Palladio’s designs or simply inspired by him, Scamozzi’s stage constructions are extremely innovative—actually constructing in three-dimensions what had traditionally been a painted backdrop.

The result of Palladio and Scamozzi’s antiquarian knowledge and artistic innovation is a splendid and alluring space. Yet despite its enthralling qualities, the Teatro Olimpico quickly fell into disuse after its first production. Its influence is palpable, nonetheless, in two northern Italian theaters built shortly after the Olimpico: the 1590 Teatro all’antica in Sabbioneta, also built by Scamozzi, and the 1618 Teatro Farnese in Parma.
Additional resources:
Empire of the Eye: The Magic of Illusion (video from The National Gallery of Art)
Teatro Olimpico
Cite this page as: Dr. Jimena Berzal de Dios, "Palladio, Teatro Olimpico," in Smarthistory, November 28, 2015, accessed May 24, 2022, https://smarthistory.org/palladio-teatro-olimpico/.