Portraits were once rare

We live in a culture that is so saturated with images, it may be difficult to imagine a time when only the wealthiest people had their likeness captured. The wealthy merchants of Renaissance Florence could commission a portrait, but even they would likely only have a single portrait painted during their lifetime. A portrait was about more than likeness, it spoke to status and position. In addition, portraits generally took a long time to paint, and the subject would commonly have to sit for hours or days, while the artist captured their likeness.

The most recognized painting in the world 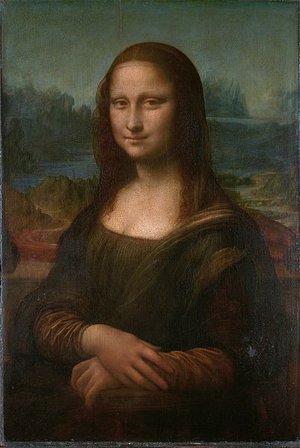 The Mona Lisa was originally this type of portrait, but over time its meaning has shifted and it has become an icon of the Renaissance—perhaps the most recognized painting in the world. The Mona Lisa is a likely a portrait of the wife of a Florentine merchant. For some reason however, the portrait was never delivered to its patron, and Leonardo kept it with him when he went to work for Francis I, the King of France.

The Mona Lisa’s mysterious smile has inspired many writers, singers, and painters. Here’s a passage about the Mona Lisa, written by the Victorian-era writer Walter Pater:

We all know the face and hands of the figure, set in its marble chair, in that circle of fantastic rocks, as in some faint light under sea. Perhaps of all ancient pictures time has chilled it least. The presence that thus rose so strangely beside the waters, is expressive of what in the ways of a thousand years men had come to desire. Hers is the head upon which all “the ends of the world are come,” and the eyelids are a little weary. It is a beauty wrought out from within upon the flesh, the deposit, little cell by cell, of strange thoughts and fantastic reveries and exquisite passions. Set it for a moment beside one of those white Greek goddesses or beautiful women of antiquity, and how would they be troubled by this beauty, into which the soul with all its maladies has passed! 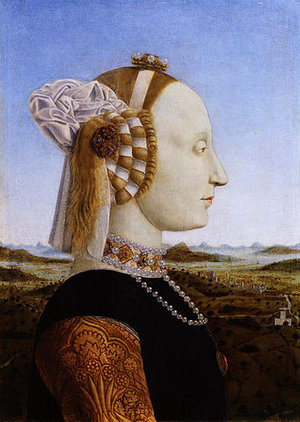 Piero della Francesca’s Portrait of Battista Sforza (c. 1465-66) is typical of portraits during the Early Renaissance (before Leonardo); figures were often painted in strict profile, and cut off at the bust. Often the figure was posed in front of a birds-eye view of a landscape.

With Leonardo’s portrait, the face is nearly frontal, the shoulders are turned three-quarters toward the viewer, and the hands are included in the image.

Leonardo uses his characteristic sfumato—a smokey haziness, to soften outlines and create an atmospheric effect around the figure. When a figure is in profile, we have no real sense of who she is, and there is no sense of engagement. With the face turned toward us, however, we get a sense of the personality of the sitter. 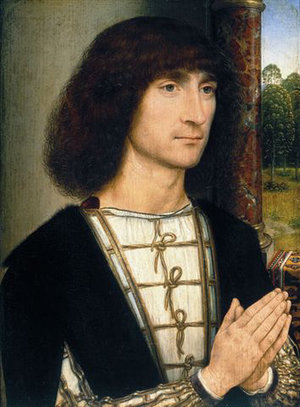 Northern Renaissance artists such as Hans Memling (see the Portrait of a Young Man at Prayer, c. 1485-1494, left) had already created portraits of figures in positions similar to the Mona Lisa. Memling had even located them in believable spaces. Leonardo combined these Northern innovations with Italian painting’s understanding of the three dimensionality of the body and the perspectival treatment of the surrounding space.

An important copy of the Mona Lisa was recently discovered in the collection of the Prado in Madrid. The background had been painted over, but when the painting was cleaned, scientific analysis revealed that the copy was likely painted by another artist who sat beside Leonardo and copied his work, brush-stroke by brush-stroke. The copy gives us an idea of what the Mona Lisa might look like if layers of yellowed varnish were removed. 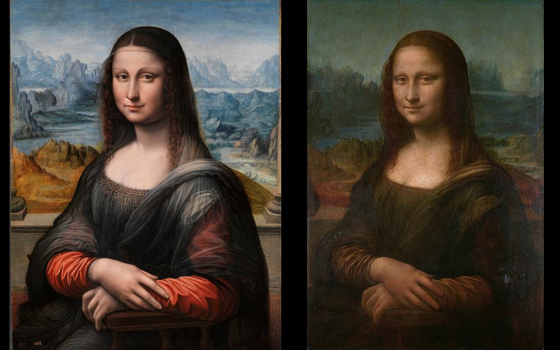 Louvre Feature: A Closer Look at the Mona Lisa