Albrecht Altdorfer, The Battle of Issus
Gerhard Emmoser, Celestial globe with clockwork
Portraits of Elizabeth I: Fashioning the Virgin Queen
Hunters in a Landscape tapestry
The conservator’s eye: a stained glass Adoration of the Magi
Conserving the Wolsey Angels The 16th-century painter and author of Lives of the Artists, Giorgio Vasari, praised the work of Sofonisba Anguissola. Vasari wrote that Sofonisba,

has laboured at the difficulties of design with greater study and better grace than any other woman of our time, and she has not only succeeded in drawing, colouring, and copying from nature, and in making excellent copies of works by other hands, but has also executed by herself alone some very choice and beautiful works of painting.”[1]

Sofonisba Anguissola was an artist who came from a noble family in Cremona (northern Italy). She is well known for the paintings she made of herself and her family (she was the oldest of seven children). In 1559, she became a lady-in-waiting to the Queen of Spain, Elisabeth de Valois, and continued to produce works while at the court of King Philip II until 1573. Interestingly, Sofonisba painted at least twelve self-portraits at a time when this was not a particularly common subject for artists (in the next century, Rembrandt would be the first artist to make the self-portrait a major part of his oeuvre). Women in Renaissance Italy were generally barred from becoming apprentices to master artists (the standard way in which artists were trained during the Renaissance). Female artists tended to come from families where a father (or sometimes a brother) was an artist. In this way they could receive training and bypass the apprenticeship system. Sofonisba is atypical in this respect—her father was not an artist. Instead, she studied with other artists—with Bernardino Campi as well as Bernardino Gatti (Il Sojaro)—who exposed Anguissola to the fundamentals of painting, such as the importance of disegno (drawing or design).

We have a letter from the artist’s father dated 7 May 1557 thanking the great Italian Renaissance painter, sculptor, and architect, Michelangelo, for the “honourable and thoughtful affection that you have shown to Sofonisba, my daughter, to whom you introduced to practice the most honourable art of painting.”[2] While it is clear from this note that Sofonisba met the famous Renaissance artist, it has also been suggested that she may have even studied with Michelangelo. Certainly the renown she gained in Italy helped to secure her position as lady-in-waiting at the Spanish court.

Sofonisba’s international renown grew throughout her lifetime. Later in her life, the great Baroque painter Anthony van Dyck visited her in Sicily and painted her portrait (above). Centuries later, with the feminist movement of the 1970s, Sofonisba’s fame and significance have been once again “rediscovered” and she is now counted among ranks of other important painters of the early modern period, a revival of interest similar to that accorded to artists such as Artemisia Genitleschi. In the 1556 self-portrait (above), Sofonisba shows herself in the act of painting, applying mixed pigments to a canvas that depicts the Virgin and Christ Child tenderly kissing. She gazes outward—as if we have just interrupted her in mid-stroke. Her expression is calm and reserved. A maulstick (a common device used to support the artist’s hand) held in her left hand supports her right hand as she touches the brush to the canvas. The artist wears a simple black dress—possibly to connote modesty and virtue. Her simple fashion embodies the woman of court, as outlined by Baldassare Castiglione in his Book of the Courtier (1528):

I wish this [Court] Lady to have knowledge of letters, music, painting, and to know how to dance and make merry; accompanying the other precepts that have been taught the Courtier with discreet modesty and with the giving of a good impression of herself. And thus, in her talk, her laughter, her play, her jesting, in short, in everything, she will be very graceful, and will entertain appropriately, and with witticisms and pleasantries befitting her, everyone who shall come before her. [3]

Some of Sofonisba’s other self-portraits, such as one where she holds a small book (left), even include inscriptions like “Sophonisba Angusola virgo seipsam fecit 1554” (The virgin Sofonisba Anguissola made this herself in 1554) to identify herself as a chaste, virtuous woman.

The inclusion of a painting of the Virgin Mary and Christ child in the 1556 self-portrait further reflects on Sofonisba’s virginity. While Mary feeding, kissing, or embracing Christ as a child were common subjects of this era, it is likely that Sofonisba incorporated this intimate scene between mother and son here to fashion herself as a virtuous woman—one who identifies with the ultimate virtuous woman, the Virgin Mary. Displaying herself in the act of painting associated her with an established tradition of artists depicting themselves—not all of them men. While contemporaneous artists like Titian and Albrecht Dürer painted self-portraits, those that included a painter’s tools of the trade—a canvas, palette, and maulstick—were less common. Examples do exist, however, from the sixteenth century, and artists showing themselves with their tools became increasingly popular over time. Like Sofonisba, Caterina van Hemessen fashions herself at a canvas, holding a maulstick while she paints. A self-portrait by the Dutch artist Joachim Wtewael also shows the artist holding his painter’s tools, most likely applying paint to a canvas outside the picture plane.

Beyond painting self-portraits, Sofonisba also produced miniatures and group portraits. Many of those completed before her departure for Spain, such as The Chess Game, exhibit members of her family. Sofonisba would not have had access to male models, and drew inspiration from those people she encountered in her daily life like her family. This painting shows the artist’s three sisters (Lucia, Europa, and Minerva) playing chess—an intellectual pursuit—with their governess looking over them. Sofonisba shows an intimate setting with her sisters. The sister to the left, thought to be Lucia, looks out at the viewer after winning the game. Sofonisba displays her virtuosity as a painter here by positioning her figures in a variety of poses. Their gazes also lead our eye around the canvas and eventually back to the artist herself, who occupies the position outside of the canvas. Sofonisba also demonstrates her skill by painting a variety of textures in her sisters’ clothes and the imported carpet under the chessboard. 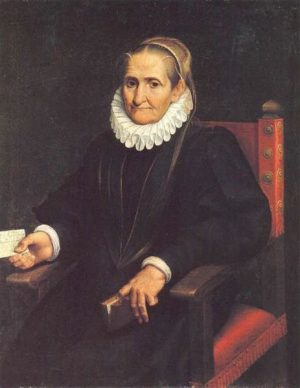 Sofonisba continued painting portraits throughout her life, including self-portraits of her in advanced age. One, dated to 1610 (left, when the artist was 78) shows the artist seated on a chair, holding a book and a piece of paper. Her dress is not altogether different from the outfit in her 1556 painting: black, modest, and reserved. Upon her death at age 93 (in 1625), her second husband, Orazio Lomellino, had her tomb inscribed, “To Sofonisba, my wife, who is recorded among the illustrious women of the world, outstanding in portraying the images of man.”

Woman’s Capacity to Create: The Unusual Case of Sofonisba Anguissola

Cite this page as: Dr. Lauren Kilroy-Ewbank, "Sofonisba Anguissola," in Smarthistory, May 3, 2016, accessed May 13, 2021, https://smarthistory.org/sofonisba-anguissola/.