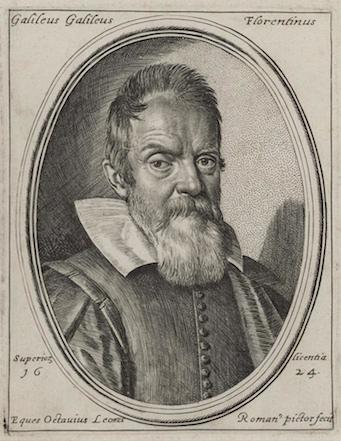 Renaissance artists—painters, sculptors and architects—had been observing nature with a special interest in depicting it faithfully and realistically from the early 15th century on. In fact, by turning to the problem of art and science in the Renaissance, it is possible to find the roots for Galileo’s own peculiarly realistic—and idealistic—approach to nature. The values and attitudes Galileo held were ones he shared with Italian humanists, including philosophers, artisans, and even musicians.

The experiment at Pisa

Galileo Galilei was born near Pisa in 1564—the same year in which Shakespeare was born and the year in which Michelangelo and Calvin died. After studying at the University of Pisa, he was appointed to the chair of mathematics—and as the photograph below reminds us, it was in Pisa that the famous leaning tower might well have suggested Galileo’s most famous experiment. 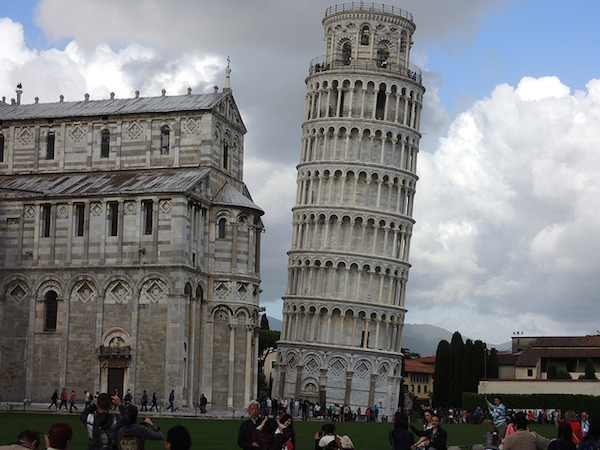 First of all, the theory that virtually everyone accepted at the time, was the traditional theory of Aristotle—who believed that heavier objects fall more quickly than lighter ones. Consider, for example, two objects—one twice as heavy as the other. Imagine Aristotle at the top of the leaning tower of Pisa, dropping off two cannonballs, one twice as heavy as the other. According to Aristotle, it should fall twice as fast. If it were four times heavier, it should fall four times faster.

But in fact, what the leaning tower of Pisa type of experiment demonstrates, when actually performed, is that Aristotle was wrong, that no matter what the difference in weight, two heavy objects will fall simultaneously at virtually the same speed. If Aristotle were right, this could only happen if the larger stones were dropped from a higher point in the clouds—but at virtually the same time—or that the lighter ones started falling earlier than the heavier ones—neither of which seemed very probable to Galileo. Instead, the simplest explanation was simply that heavy or light, all stones fell simultaneously with the same speed. 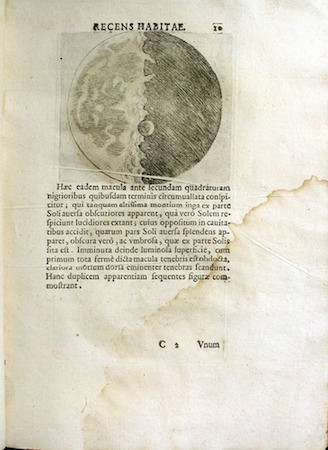 Image of the moon, from Galileo’s presentation copy of the Sidereus nuncius (1610) (image: courtesy History of Science Collections, University of Oklahoma Libraries)

In any case, Galileo’s interest soon turned from falling bodies to astronomy. Rumors of an invention made by a Dutch spectacle-maker reached Venice, and these led Galileo to construct his first telescope in July of 1609. It wasn’t long before Galileo began to make a series of startling observations, including the discovery of innumerable stars never seen before, mountains on the moon, the movements of which he carefully plotted from day to day.

He was soon to publish these discoveries in a book, the Siderius Nuncius (Starry Messenger) which caused an overnight sensation. Galileo named the moons of Jupiter the “medicean planets”—in honor of his former student Cosmo and the famous Medici family—thanks to which he was shortly thereafter appointed Chief Mathematician and Philosopher to the Grand Duke of Tuscany in Florence.

The heavens are imperfect

All of these discoveries—and others—posed yet more direct challenges to Aristotle’s idea of the perfection of the heavens (namely that the heavens were perfect, immutable, unchanging). Some Aristotelian astronomers refused to look through Galileo’s telescope, others tried to deny what he had seen. The Roman Catholic Church, however, was becoming increasingly concerned—and a young Dominican, Tommaso Caccini, was the first to denounce Galileo officially and the Copernican theory his observations seemed to support from the pulpit during a sermon in Santa Maria Novella.

A few years later, as concerns mounted, Galileo was officially advised by Cardinal Bellarmino on the Pope’s behalf to proceed cautiously and speak only hypothetically about the Copernican theory, but not as if it were actually real.

Galileo returned to Florence and continued work on his book, but now he gave more emphasis to mathematical arguments rather than to experimental or physical arguments—as the Pope wished. But when the book finally appeared in 1632, it raised an immediate storm of protest leading immediately to Galileo’s arrest and famous trial by the Inquisition in Rome that found him guilty of having published a heretical book. In the end, Galileo had no choice but to repent and confess that he had gone too far. 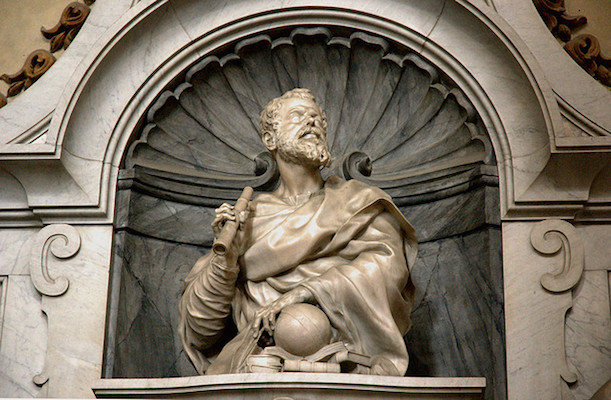 He was sentenced to life imprisonment, which he spent, for the most part, at his own villa at Arcetri near Florence, under the surveillance of the Inquisition. Even so, Galileo, in his last years, now undertook his last and perhaps greatest work, his Discourses on the Two New Sciences, which has been described as “the cornerstone of modern physics.” When Galileo died in 1642, totally blind and almost 78 years old, Pope Urban VIII did not forget his feud with Galileo, and refused to permit his burial with a suitable monument—instead, Galileo was buried unceremoniously in the Church of Santa Croce, in Florence. A few hundred years later were his remains moved to their present magnificent tomb, opposite that of Michelangelo, near the entrance to the church.

Galileo believed that nature was inherently mathematical, that mathematics was the language of nature—that mathematics was the key to understanding the reality behind the appearance of natural phenomena (for example, accelerated and parabolic motions). What Galileo achieved in revolutionizing physics was to show how observation, careful measurement, and attention to the structure of a given event—all led to an appreciation of hidden causes that ultimately expressed the pervasive mathematical unity of all nature.