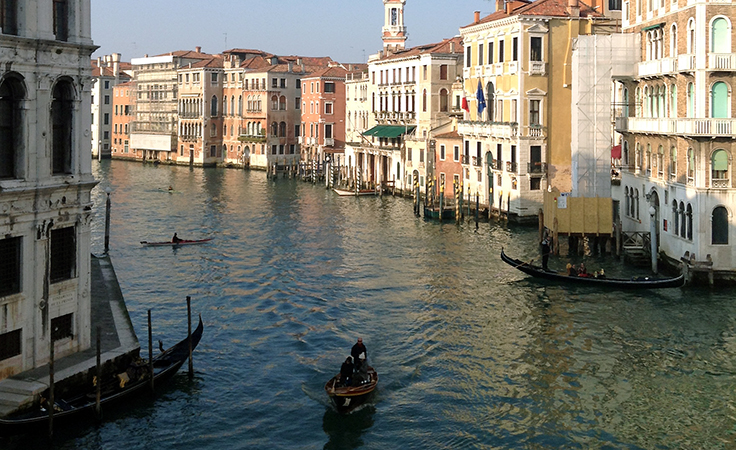 View of a Venetian canal

When we think of the Italian Renaissance, we think of cities like Florence, Siena, and Milan where artists took an interest in reviving the traditions of classical antiquity. Venice, in contrast, remained something of an outlier. Whereas Florence, Siena, and Milan recalled their Greco-Roman past, Venice looked to its Byzantine history (as part of the eastern Roman Empire), which extended from the classical period up through the more recent medieval era.

Other Italian cities were also embroiled with political unrest even well into the High Renaissance (beginning in the late fifteenth century); rivaling families vied for power, warring for control, and killing or imprisoning their enemies. Venice’s more stable political climate and defensible island setting made it different from the other major cities in fifteenth-century Italy. 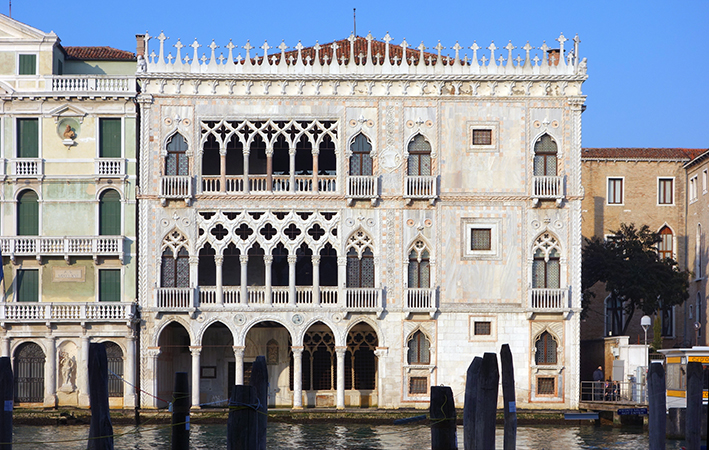 Venice’s unique position also made for a unique architecture. By the fifteenth century, it was a very wealthy city, with a strong merchant class that helped shape its culture. The city’s wealthiest families had the means and desire to build impressive palaces for themselves in the tradition of prominent civic architecture such as the fourteenth-century Palazzo Ducale on St. Mark’s Square. These powerful patrons constructed buildings as a way to express their wealth and importance and the Ca’ d’Oro (above) is a perfect example. 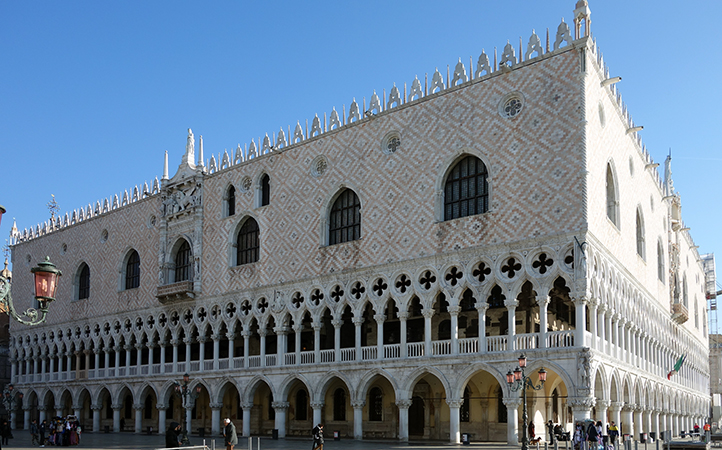 Bartolomeo and Giovanni Bon are credited with the decoration for the Ca’ d’Oro, built for Marin Contarini, of the prominent Contarini family. The building borrows its style from the Palazzo Ducale (the palace of the elected ruler of Venice), albeit on a smaller scale, but what it loses in size it makes up for in ornamentation. The building was known as the Ca’ d’Oro—“House of Gold”—because its façade originally shimmered with gold leaf, which has since faded away. You can’t get much more opulent than a golden house! Even with the gold leaf no longer in place, it is still possible to get a good sense of the richness of this gem of a building. 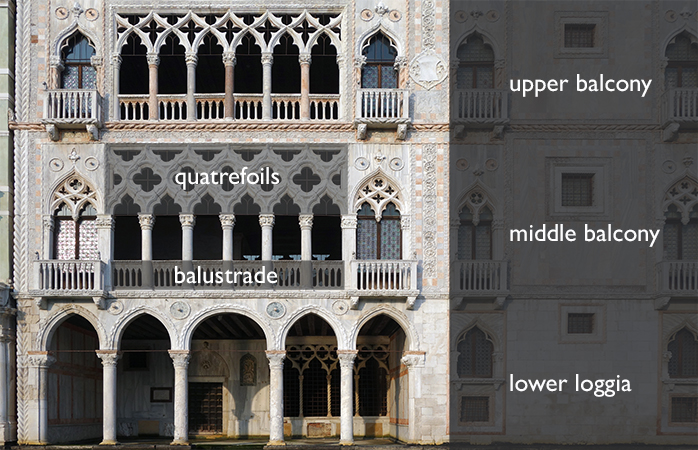 Also like the Palazzo Ducale, it is divided into three distinct stories: a lower loggia (covered corridor) of pointed arches open to the water, a middle balcony with a balustrade (railing) and quatrefoils (four-lobed cutout), and a top balcony with another balustrade and fine stone openwork.

The result is a delicate, ornate building that seems almost like a work of sculpture. Each level of the façade is increasingly ornate and intricate towards the top. The increased ornamentation on each story creates a vertical emphasis; however, that verticality is matched by the equally strong horizontal emphasis provided by the two balustrades on the upper balconies and the large cornice at the roofline.

We also see a precise harmony to the division of space. The lower loggia has a wide arch at its center, which is symmetrically flanked by narrower arches. In the balcony above, two arches fit in the space directly above the wide central arch of the lower loggia.

The arrangement of columns and arches in the upper two balconies perfectly corresponds with one another: column over column, arch over arch. The façade’s harmonious arrangement suggests the architects in Venice had similar interests to those of the classicizing architects working in Florence.

Yet, we cannot describe the Ca’ d’Oro simply in terms of Renaissance palace architecture. It is a distinctly Venetian building in its incorporation of Byzantine, Islamic, and Gothic elements. This blending together of architectural styles in a uniquely Venetian style had already occurred in the Palazzo Ducale, but this is perhaps an even better example of that phenomenon. 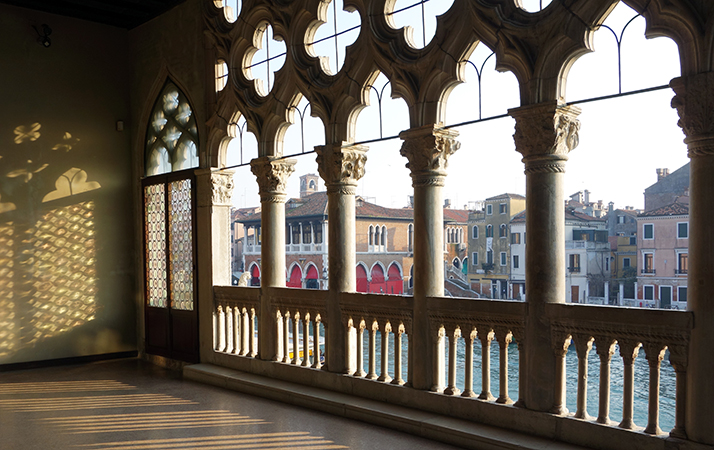 Patterned colored stones, in the tradition of Byzantine architecture, fill the flat wall space of the façade. As in the Palazzo Ducale, the ornamental details on the arcade and balconies combine Islamic and Gothic elements. In the Ca’ d’Oro, though, the ornamentation pops because of its intense detail, set within the patterned stone walls. All of the different forms of ornament are combined within the same area of the façade. 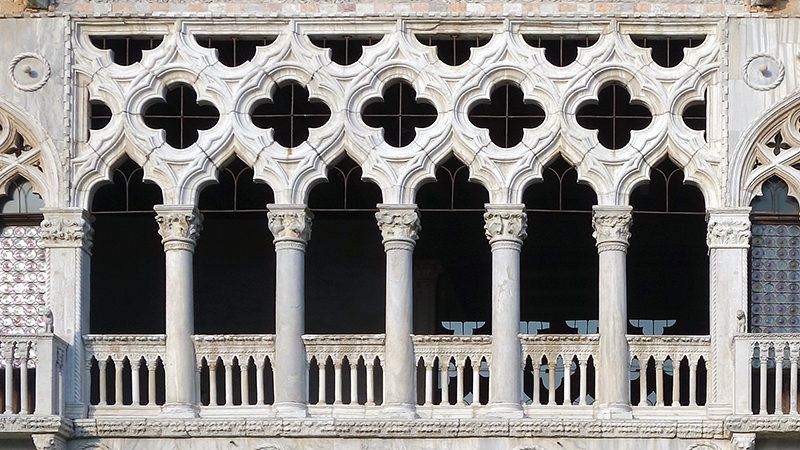 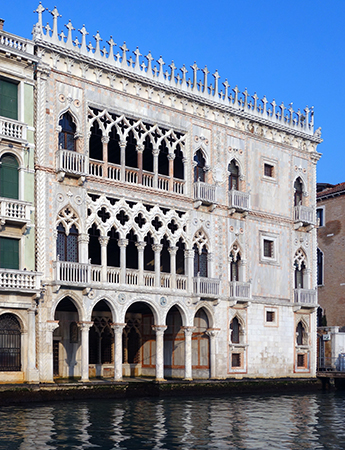 The five Gothic quatrefoils of the second story balcony stand atop slender columns. They stand out as distinct sculptural elements carved on all sides. In the upper balcony, pointed arches borrow from Islamic architecture in their distinct horseshoe shape and from Gothic architecture in their elongated, pointed form. Tracery connects every other column, creating an elegant interwoven effect. Within that interweaving, smaller pointed arches connect neighboring columns to one another, and these arches are multi-lobed, also in the tradition of Islamic architecture. Above each column there is a delicate cutout that mimics the quatrefoils in the level below. The open carving of the upper balconies in fact resembles the ornate screens common in Islamic architecture. This is repeated in the ornamentation of the windows to either side of the balcony on the second story.

In spite of its complexity and its many sources of inspiration, the building is unified and neither over-the-top nor visually chaotic. The Ca’ d’Oro’s varied elements come together in spectacularly unique fashion. The building embodies a distinct architecture all its own in early Renaissance Venice, one not merely imitative of Byzantium, the Gothic North, or Islam. Venetian architects brought these different elements together in new and surprising ways, making a building such as the Ca’ d’Oro tremendously important.

This building at the Venetian Ministry of Cultural Heritage