The period known as the Baroque (the 1600s) produced many new and innovative pictorial modes of expression and none more so than the painted ceiling. Patrons and artists began turning their eyes upward, and came up with inventive ways of decorating ceilings with a variety of motifs—from the classical gods and goddesses to the apotheosis of saints and the glorification of family lineage. Who says paintings are just for walls! 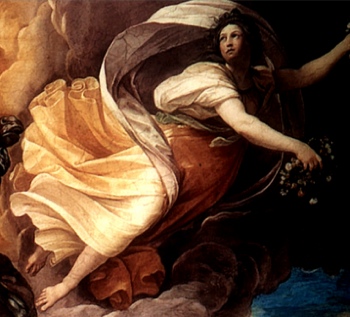 A painting for a summer house

One of the most beautiful and elegant of these ceilings is Guido Reni’s Aurora, painted in 1614 for the Roman Cardinal Scipione Borghese for the ceiling of his small summer house known as the Casino dell’Aurora. This casino (not the gambling sort) was part of the Cardinal’s larger palace residence located on the Quirinal Hill in Rome. The fresco represents Aurora (left), goddess of the dawn, bringing forth a new day as she leads the way for Apollo (below), god of light (among many other things), who follows behind in his golden quadriga (a four-horse chariot). That Aurora is bringing the dawn is evident through the change in the sky we see between the two gods: a darkish silvery gray before Aurora that turns into a bright, golden light filled sky before Apollo.

Below the edges of the clouds is a distant landscape slowly being illuminated by the dawn, with small sailboats barely visible out on the sea beyond. Aurora’s gauzy drapery flutters around her figure as she seems to be preparing to drop the sprays of flowers she carries in her hands onto the landscape below. 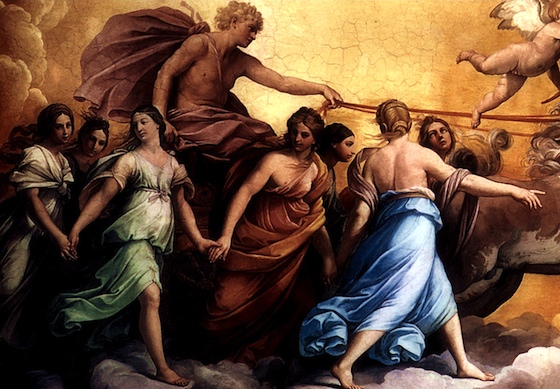 Apollo, clothed only in a light purple wrap, is enveloped in a warm, golden halo of light. Hovering between Aurora and Apollo is a torch bearing putto (a winged child similar in appearance to Cupid, but not Cupid), identified as Phosphorus, an ancient personification of the Morning Star (detail, below). Elegant female figures, known as Hours, dance alongside the chariot, representing the passage of time, with their diaphanous draperies blown gently by the wind.

The figures are represented in an ideal manner as their physiognomies and physiques are flawless and perfect in their beauty. They are timeless and ageless, never to be marred by old age and decrepitude. Moreover, Reni’s soft pastel color palette lends an idyllic, mythic quality to the scene. 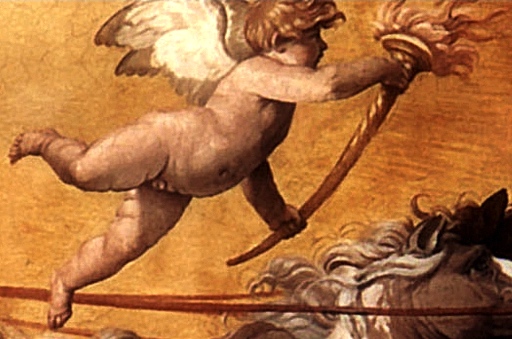 As the Aurora is an exemplar of Baroque classicism, a style within the Baroque period that purposefully recalls art from ancient Greece and Rome, it is not surprising to find that Reni’s fresco makes many references to actual works of art from Classical Antiquity. For example, the figures of the Hours bear close resemblance to the female figures in a Roman relief known today as the Borghese Dancers (above), which was originally part of Cardinal Borghese’s collection of antiquities. Similarly, the figure of Phosphorus may have been influenced by a tondo (circular form) on the east side of the ancient Roman Arch of Constantine, which represents Sol, the sun god, similarly being led by a torch bearing putto (below). 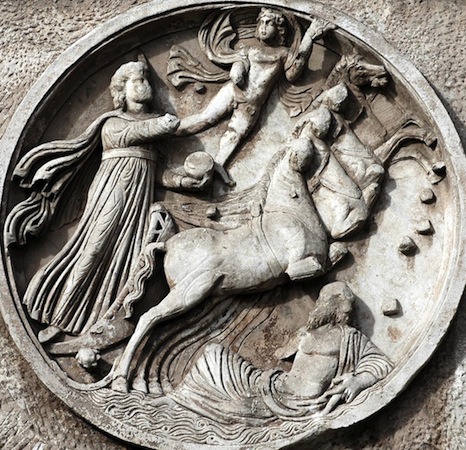 Let us now consider the experience of viewing the Aurora in the Casino dell’Aurora. The fresco is a singular scene, isolated in the center of the ceiling, surrounded by a physical (not simply painted) frame of molded stucco that is decorated with gold leaf (a process known as gilding). Reni’s use of a frame around his fresco is a pictorial device known as quadro riportato, or “painting taken elsewhere.” The idea was to the trick the viewer into thinking that an easel painting, a framed painting we would normally expect to find hanging on a wall, had actually been placed on the ceiling (keep in mind that Aurora is a fresco, painted right on the ceiling). 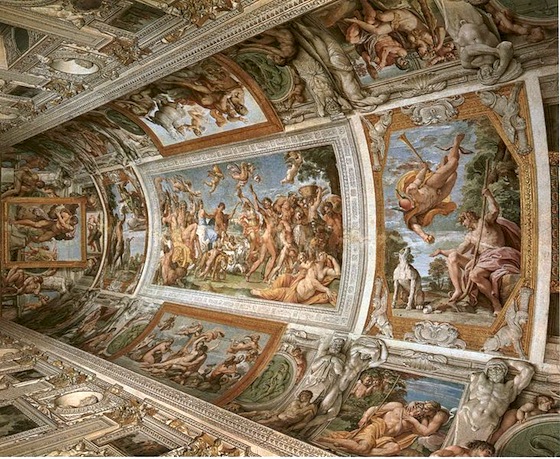 Reni was not the first to do this, as there was already another famous ceiling in Rome that also used quadro riportato—the Farnese Gallery Ceiling painted by Annibale Carracci (above). In the case of the Farnese ceiling, however, the frames are not physical frames, but were painted illusions—a technique known as trompe l’oeil (literally to “trick the eye”). Thus, in comparison, we might say that Reni’s use of an actual frame was a very direct interpretation of quadro riportato! 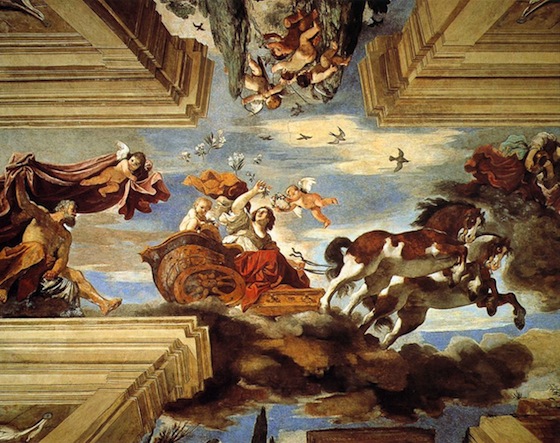 In addition to the “framing” of paintings on ceilings, artists used another illusionistic technique of visually breaking the ceiling so the image appears to be in the sky above, not inside the room. An example of this is another painting with the subject of Aurora, this one by the artist Guercino (above). Painted just a few years after Reni’s Aurora, Guercino extended the architecture of the room onto the vaulted ceiling and then “opened” it up so the viewer would see Aurora and her entourage racing by in the sky above. The painted illusionistic architecture, known as quadrattura, was also a popular illusionistic pictorial device used in several other Roman ceilings in the seventeenth century (including Pozzo’s Glorification of Saint Ignatius—a ceiling fresco in the church of Sant’Ignazio in Rome).

In the end, Guido Reni’s fresco, classicizing in both style and subject, with its golden stucco frame, was a perfect choice for the Casino dell’Aurora. Set in the gardens of Cardinal Borghese’s estate, the summer house was specifically intended to allude to, if not actually recreate, elements of the Classical past. Its façade was (and still is) decorated with ancient Roman sarcophagi and reliefs further enhancing its intended atmosphere. Perhaps we can imagine Cardinal Borghese looking up at Aurora bringing in the new day as he escaped the hot Roman summer sun in his own personal version of arcadia.

Short biography of the artist from the Getty Museum

Reni at The National Gallery