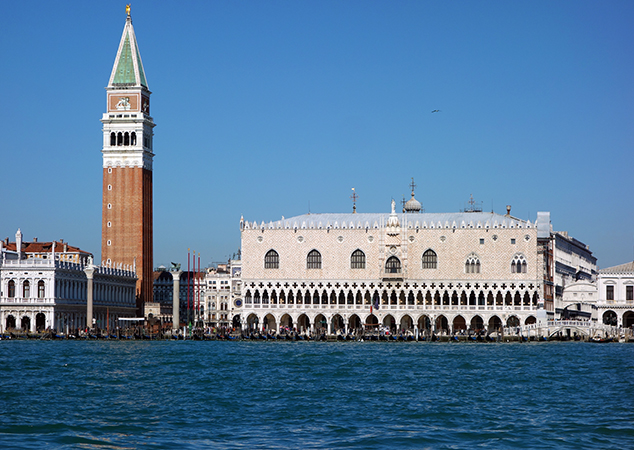 Venice in the 14th century

Today, we think of Italy as a unified country. But in the fourteenth century, the major urban centers of Italy were largely unstable. Wars were common. Rivaling families sought to oust their opponents—often by violent means—and seize power for themselves. This is why so much civic architecture of the Renaissance period is imposing and fortress-like. Buildings like Florence’s Palazzo Vecchio (below)—with its thick, tall walls and defensive crenellations (gaps at the top of the wall for shooting)—were the standard for civic buildings in Italy well into the fifteenth century. 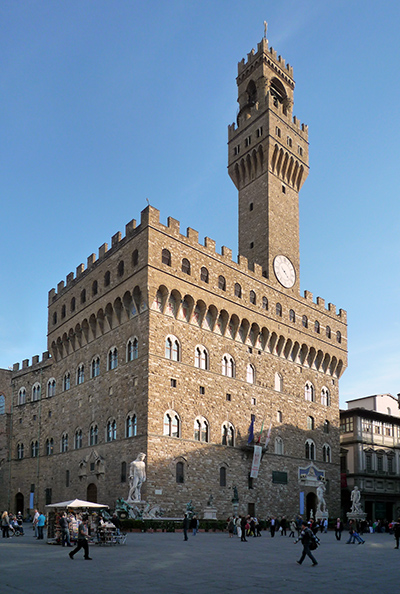 Things were different in Venice. The city was politically more stable than other Italian centers, and it was also naturally protected from invasion by its favorable setting in a lagoon on the Adriatic Sea. As a result, Venice’s architecture did not need to be as defensive as the architecture of neighboring regions. This allowed for greater experimentation in architectural form evident in the Palazzo Ducale, constructed beginning in 1340, for the elected ruler of Venice.

A new palace for the doge

Fourteenth-century Venice was an oligarchy, meaning that it was ruled by a select group of elite Venetian merchants. The main elected ruler was called the “doge,” and his residence was—much like the White House in the United States—a private residence and also a place for official business. Although there was already a residence for Doge Gradenigo in the 1340s, the system of government changed afterwards so that more people were involved in governmental activities. This required more space than was available in the existing palace, the great council (a political body consisting of the nobility) voted to extend the palace. Workers began construction in 1340 and continued into the early part of the fifteenth century. 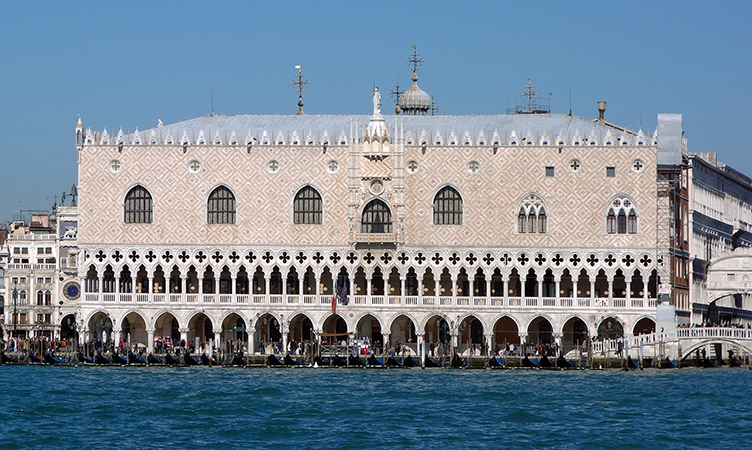 Palazzo Ducale, 1340 and after, Venice

The Palazzo Ducale sits in a prominent location. It is adjacent to the Basilica of St. Mark (Venice’s cathedral church), on St. Mark’s Square. The Ducale also overlooks the lagoon, which was a major point of entry into the city. Its prominent location made it (and continues to make it) an important symbol of Venetian architecture. It offered visitors one of their first impressions of the city. 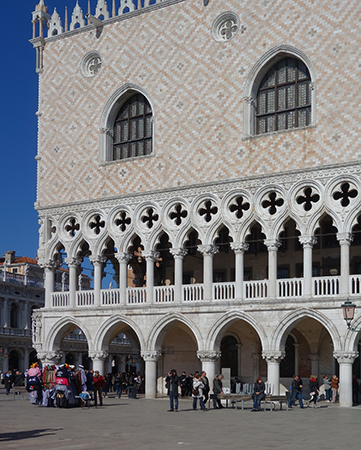 The building appears delightfully open and ornamental precisely because it is able to forego many elements of defensive architecture. The façade includes three levels: a ground-level loggia (covered corridor) defined by an arcade of pointed arches. The second level contains an open balcony which features a prominent balustrade (railing) that divides the first and second stories.
Like the lower loggia, the balcony features pointed arches, though here with the addition of delicate quatrefoils (four-lobed cutouts) just above them.
A stone wall completely encloses the third and uppermost level of the façade and is punctuated by a row of large, pointed windows.

In many respects—especially in its horizontal emphasis and three-story façade—the exterior of the Palazzo Ducale exhibits features that emerged in the Renaissance architecture of Florence during the fifteenth and sixteenth centuries. One could argue that this building anticipates those trends. Undoubtedly, in the Palazzo Ducale, we see a degree of the harmony and rhythm that we associate with later Italian Renaissance architecture. 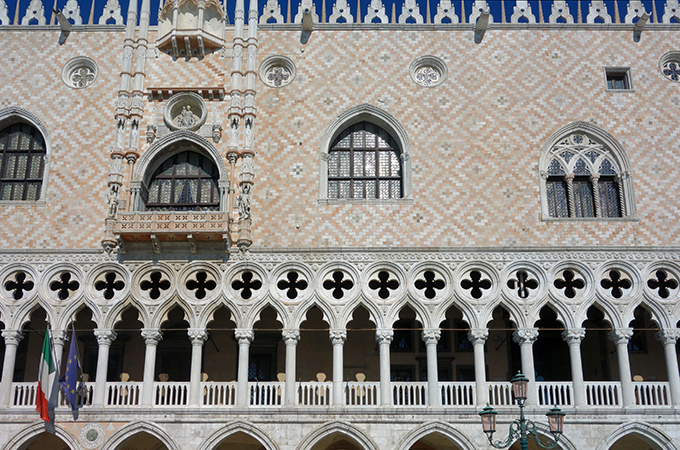 However, the Palazzo Ducale is actually more representative of the unique position of Venice in the fourteenth century. Venice occupied a geographical location that was inherently defensible, and the city was uniquely situated in terms of its proximity to other cultures. Venice once belonged to the Byzantine Empire (the eastern part of the Roman Empire), but by the fourteenth century, it was an independent republic. Yet, it still had strong cultural and artistic links to Byzantium, partially because Venice was a robust center of trade with the East. The city absorbed many of the traditions of Islamic art and culture by virtue of contact with Islamic traders, artisans, and goods. Similarly, Venice’s location at the northern edge of the Italian peninsula meant that it was closer to the Gothic centers of northern Europe than Italian cities farther to the south, such as Florence. It took longer to shake the Gothic habit, so to speak. 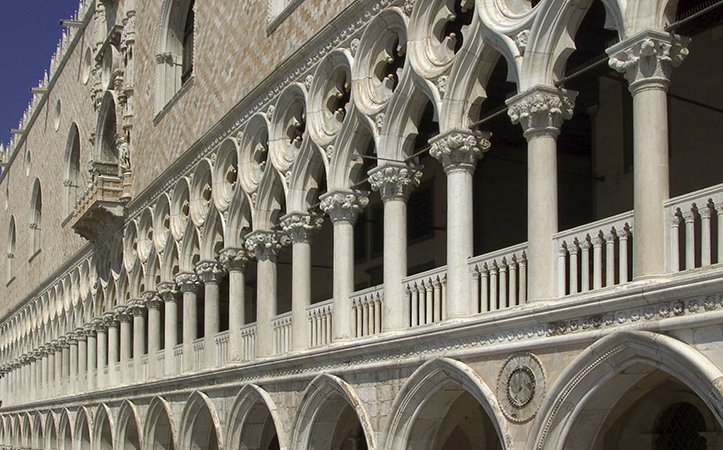 We see the architectural heritage of each of these distinct cultures in the Palazzo Ducale. The upper story of the façade features a diamond pattern of colored stone, a technique that was a hallmark of late Byzantine architecture. The openwork (lattice-like carving) and arcades of the bottom two levels combine Islamic and Gothic influences. Pointed arches and quatrefoils were typical features on Gothic buildings, but the pointed arches bow out beneath their peaks, in the manner of Islamic horseshoe arches. We also see tripartite lobes within the arches of the balcony that resemble a similar trend in Islamic architecture. As a result of its unique cultural and geographic position, fourteenth-century Venetian architecture—as exemplified by the Palazzo Ducale—is a beautiful hybrid of Byzantine, Islamic, and Gothic cultures, which are all bound together within a blossoming Venetian Renaissance architectural tradition.

UNESCO video, Gondolas and Gondoliers: Venice and its Lagoon 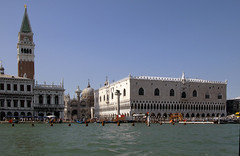