This is a painting about the events of a single day: May 14th, 1610. That date witnessed two seismic incidents in French history: a cold-blooded political assassination, and the investiture of one of the seventeenth century’s most powerful women. Rubens’s vast canvas turns the day’s news into an epic Baroque dramatization, and a persuasive piece of propaganda.

On that fateful May morning in 1610, King Henry IV of France was murdered in broad daylight on the streets of Paris by a Catholic zealot named François Ravaillac. France was plunged into a dilemma of succession: Henry’s eldest son Louis was too young to take the throne, and his wife Marie de’ Medici couldn’t rule as Queen, since French Salic Law forbade women to be monarchs. The solution was decided within just two hours of the assassination: Marie was appointed regent and therefore de facto ruler of France. This positioned her in a seat of power previously only ever held by men.

Twelve years after these momentous affairs, Marie commissioned one of Europe’s most renowned artists, Peter Paul Rubens, to paint a series of 24 paintings about her life (today we refer to these as the Medici Cycle). These were designed to decorate the Luxembourg Palace—her enormous new residence in Paris. The Apotheosis of Henry IV and the Proclamation of the Regency of Marie de’ Médici is the middle image in the cycle. It is more than twice the width of the other paintings and it concerns the events of May 14th, 1610. But there’s no attempt to show either the murder or Marie’s royal promotion realistically. Instead the artist has translated them into a large-scale drama, radically simplifying and the events and turning them into a grand spectacle. 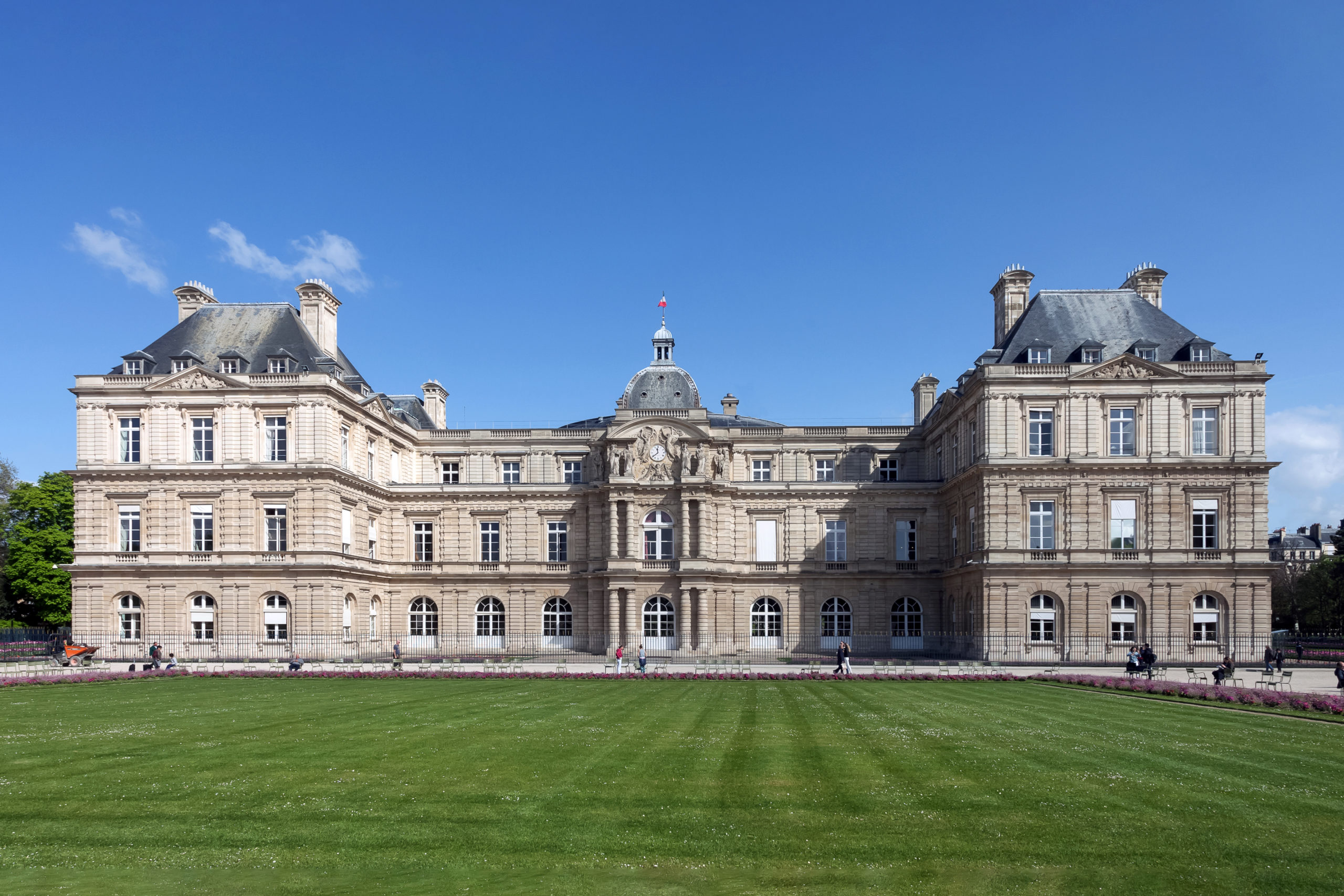 The power of allegory

One aspect of this non-realistic approach is the painting’s use of symbols. For example, a snake at the bottom left hand corner — synonymous with evil in Christian iconography—stands in for the murderer Ravaillac. Above it, Henry is shown rising to heaven flanked by the Roman deities Jupiter (with his attribute an eagle) and Saturn (who holds a sickle) and ascending towards other gods in the heavens above. The center of the composition is filled with the Roman deities Victoria (goddess of Victory) in gold drapery who holds a palm leaf to symbolize martyrdom, and an unarmed and nude Bellona (goddess of war) who despairs at the death of the peace-bringing Henry. The dogs just behind Bellona are symbols of faithfulness in marriage. On the right side of the composition Marie is shown in the black attire of a widow, with the nobility of France shown gathering around her dais, imploring her to accept the gifts being offered to her. These are being proffered by several allegorical and mythological characters such as a kneeling personification of France holding up an orb of leadership, and a flying allegory of Divine Providence giving her a ship’s rudder to signify her duty to steer the nation in a moment of crisis. Prudence stands beside Marie advising her to accept the symbols of authority, and behind the throne is the Roman goddess of wisdom Minerva. Even the architecture is symbolic: the columns around Marie are twisting Solomonic columns that are reputed to have flanked the throne of the legendary King Solomon of the Bible. A triumphal arch (signifying success) in the background perfectly frames Marie’s body.

Rubens would have learned how to depict such allegories from textbooks on symbolism published at the time. The most famous was the recently released Iconologia by Cesare Ripa, but there were many other emblem books, or emblemata, available for consultation. 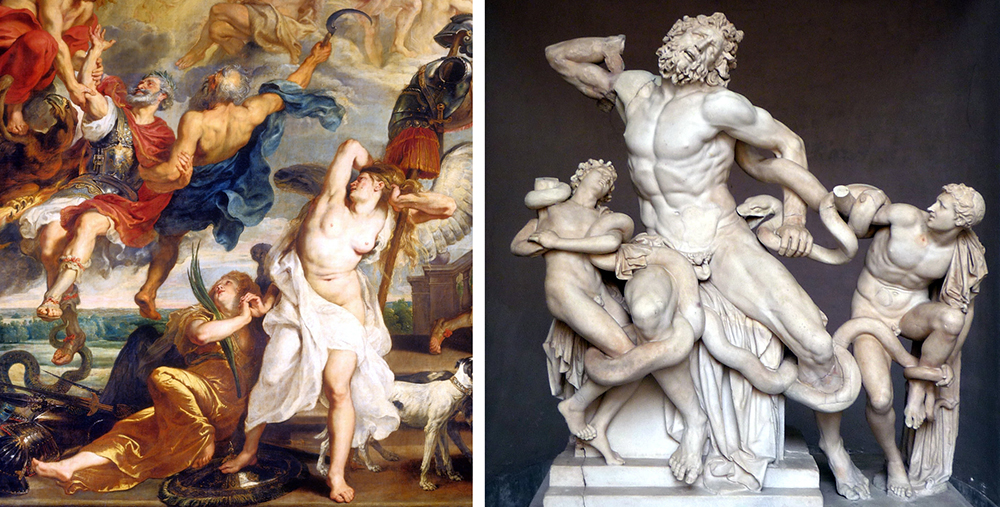 As you may have also noticed the language of allegory and many of the figures that Rubens used are all connected with ancient Rome. By making such associations, Rubens was aiming to connect French royalty with what was considered to be the greatest civilization of the past. There are also sly stylistic references to classical art. The poses of Bellona and Henry, for example, recall Laocoön and his sons, perhaps the most famous and well-respected sculptural group from antiquity. But the painting also betrays influence from more modern developments in art: the right-hand section, for example bears a very similar composition to Caravaggio’s Madonna of the Rosary. In commissioning Rubens, Marie de’ Medici was probably getting the most intellectual and artistically knowledgeable artist in Europe to enshrine her legacy.

The language of allegory and allusions to ancient Rome were characteristic tactics used by artists of the early seventeenth century. What makes the painting unusual for its time is the predominance of powerful women (real and allegorical) among the cast of characters.

As was previously mentioned, the real events of May 14, 1610 (from Henry’s undignified stabbing in a constricted carriage to Marie’s hasty inauguration as regent) were not the concern of Rubens, who shows us an ideal—a concept, rather than a reality. This fits the painting’s intentions perfectly. The Medici Cycle, after all, was conceived by Marie de’ Medici, and therefore designed to reassure her of her own right to rule, and to persuade others of it too. More than this—it was principally commissioned to compensate for Marie’s own flaws and unpopularity.

Marie suffered the hatred of the French aristocracy not only because she was a woman, but because she was Italian and surrounded herself with foreign advisers. She was no doubt the victim of inherent misogyny and jingoism, but she was also guilty of various intrigues and political misjudgments. Marie unscrupulously maintained political control in France even after her son Louis’s coming of age in 1614. She mismanaged the nation’s revenues and undermined aspects of her deceased husband’s foreign policy. Louis eventually gained his rightful rule of France by force in 1617, exiling his mother from court and having her two favored advisers killed.

Thus, the whole Medici Cycle was an attempt to justify Marie’s original right to rule and persuade us of her pure intentions. This may be why she is shown as a loyal, grieving wife who has to be implored by a chorus of supporters to take the regency, despite her reluctance. To put it simply, the painting is an overwhelming and learned piece of artistic propaganda. The 24 paintings of the Medici Cycle are now in the Louvre in Paris, in a special gallery where The Apotheosis of Henry IV and the Proclamation of the Regency of Marie de’ Médici hold pride of place. It has influenced many later artists, most famously Eugène Delacroix who adapted Rubens’s Bellona for the central female figure in Liberty Leading the People (1830). Delacroix was clearly smitten by this vision of powerful, commanding and righteous femininity, albeit for entirely contrary political purpose. Paul Cézanne was also infatuated with the painting and repeatedly studied it in the Louvre, also re-using the pose and statuesque qualities of Bellona in his own nude studies. In the twentieth century, Rubens’s epic allegorical approach to current affairs can even be seen as influencing works of art like Pablo Picasso’s Guernica (1937).

The Medici Cycle at the Louvre

Cite this page as: Matthew Wilson, "Peter Paul Rubens, The Apotheosis of Henry IV and the Proclamation of the Regency of Marie de’ Médici," in Smarthistory, September 5, 2020, accessed January 18, 2021, https://smarthistory.org/peter-paul-rubens-henry-iv-regency-marie-de-medici/.