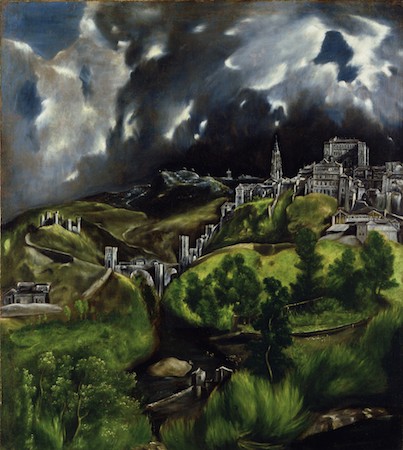 Not just any sky

Landscape paintings are often meant to document the look of a particular time in a particular place, to freeze a single moment and preserve it for eternity. El Greco’s View of Toledo does not do that. Although the large church is placed in the correct place in the city, El Greco changed the locations of several other buildings, proving that documentation was not the artist’s primary concern. Rather than telling us what Toledo looked like, here, El Greco communicates what the city feels like. Toledo becomes the means through which the artist expresses an interior psychological state, and perhaps, a view about the nature of man’s relationship with the divine. 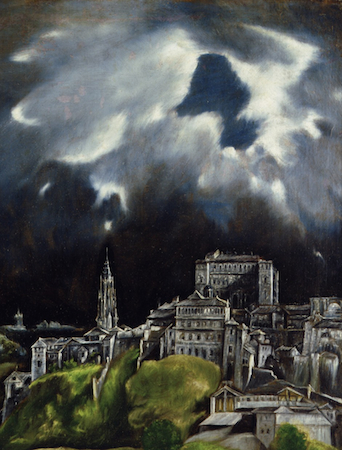 Using typically dark, moody colors, El Greco presented the Spanish city of Toledo at the top of a rolling hill. The city itself takes up only a little space in the center of the painting. The landscape and sky dominate. This is not just any sky. El Greco’s clouds are about to crack open and unleash a storm on the city. The buildings themselves seem to crawl across the painting, and curving lines throughout the hill give the impression that the vista is moving, that it might actually be alive.

In El Greco’s Toledo, something is about to happen, and it probably isn’t going to be good.

Something new: A cityscape

To understand how radical this painting is, we have to weigh a few historical circumstances. First, El Greco was painting in Counter Reformation Spain, where religious dictates based on the Council of Trent (which ended in 1563), banned the landscape as a suitable subject for painting. Although the church was his primary patron, the artist broke with that convention, and because of this, View of Toledo has been called the first Spanish landscape. More impressively, cityscapes never existed anywhere in the sixteenth century. El Greco may literally have invented the genre. Some art historians found this so unsettling that they had suggested that, because El Greco often included views of Toledo in the backgrounds of his religious paintings and portraits, View of Toledo may have actually been cut from the background of a larger painting.  However, we now know that this is not true.

The city of Toledo

Although El Greco, “the Greek,” is most usually known as a Spanish painter, he was born Domenikos Theotokopouolos in Crete in 1541, and spent much of his life in Italy.  He was trained in the tradition of Byzantine icon paintings in either Crete or Venice, where many Cretans had settled, and by the 1560s was painting in Titian’s workshop. In the 1570s he went to Rome.  Although El Greco was well reputed in Italy, he failed to secure any commissions in the city, and was convinced by a Spaniard to move to Toledo, where he spent the next forty years of his life, and where he died in 1614.

Why did the city of Toledo inspired El Greco to paint such a powerful picture of the city?  In Spain, El Greco failed to find favor with the king, and instead worked for the Catholic Church. If he was not raised in the faith, he almost certainly would have had to convert to Catholicism. In the 1500s, Spain’s Catholic Church had undergone huge transformations.  The century started with the Spanish Inquisition, in which non-Catholics were hunted out, tried, tortured, and often, killed. At the same time, people, like Saint Theresa of Avilla and Saint Ignatius of Loyola (both Spanish), were preaching that, through prayer, one could be directly inspired by God, and they claimed to have frequent visions in which God spoke to them.  Because of their beliefs, even these saints came under the scrutiny of the Inquisition, although they were eventually acquitted. Spain’s brand of Catholicism, compared to Italy’s, was mystical and based on personal experience.

This mysticism is reflected in El Greco’s View of Toledo.  Almost entirely subsumed by the landscape, the city seems to be at the direct mercy of God. This is not a forgiving God, but rather a wrathful one, as in the Old Testament. Toledo is undergoing a reckoning. At the same time, the landscape transcends this religious reading. It becomes reflective of the inner conflict of each human being, the feeling that making one’s way in the world is a harrowing endeavor. 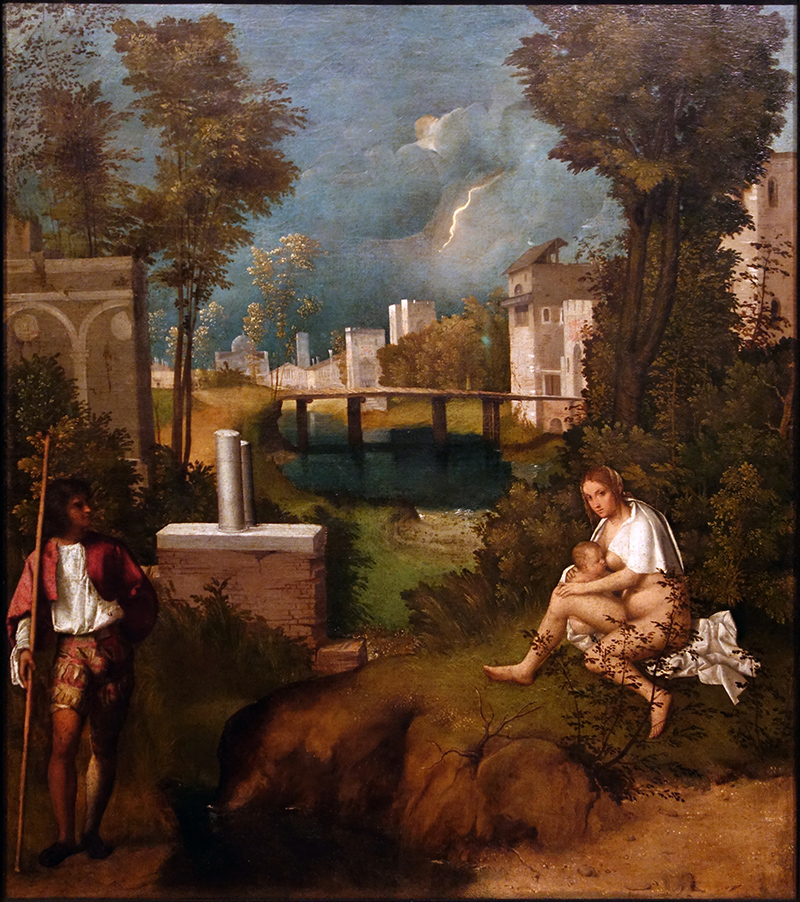 View of Toledo was centuries ahead of its time, and probably can best be compared to Vincent van Gogh’s Starry Night, 1889, which contains many of the same compositional elements (a swirling sky, overwhelming nature, a skyline dominated by a church).  But whereas van Gogh evokes the calm of a little sleeping town, El Greco’s painting captures the violence of the exterior world against an interior one.

In this way, View of Toledo has much in common with Giorgione’s The Tempest, in which a crack of lightning and oncoming storm threaten a woman and child seated in the landscape. El Greco reminds us that there is an unfriendly world outside of us and that we are all subject to forces beyond our control. He leaves it up to us to decide whether we will succumb or prevail. 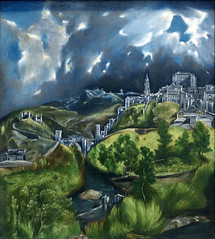 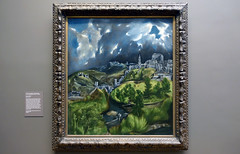 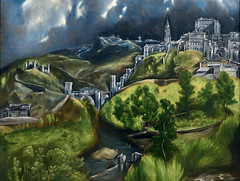 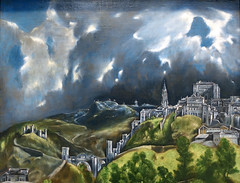