In José Agustín Arrieta’s costumbrista painting, La Sorpreza (The Surprise, 1850), viewers are invited to ponder the surprise(s) the painting holds. This fictional, theatrical composition, loosely based on reality, encourages multiple narratives. Nineteenth-century costumbrista paintings were concerned with representing customs, traditions, and costumes of everyday people and their lives.

In La Sorpreza, we see a lively commingling of different types of people of various racial and social classes and occupations. The figures are depicted in an outdoor, public marketplace outside of an establishment, a pulquería (a tavern that sells the alcoholic beverage pulque, made from fermented maguey sap) called La Sorpreza, which gives the painting its name.

Drawing on the casta painting tradition 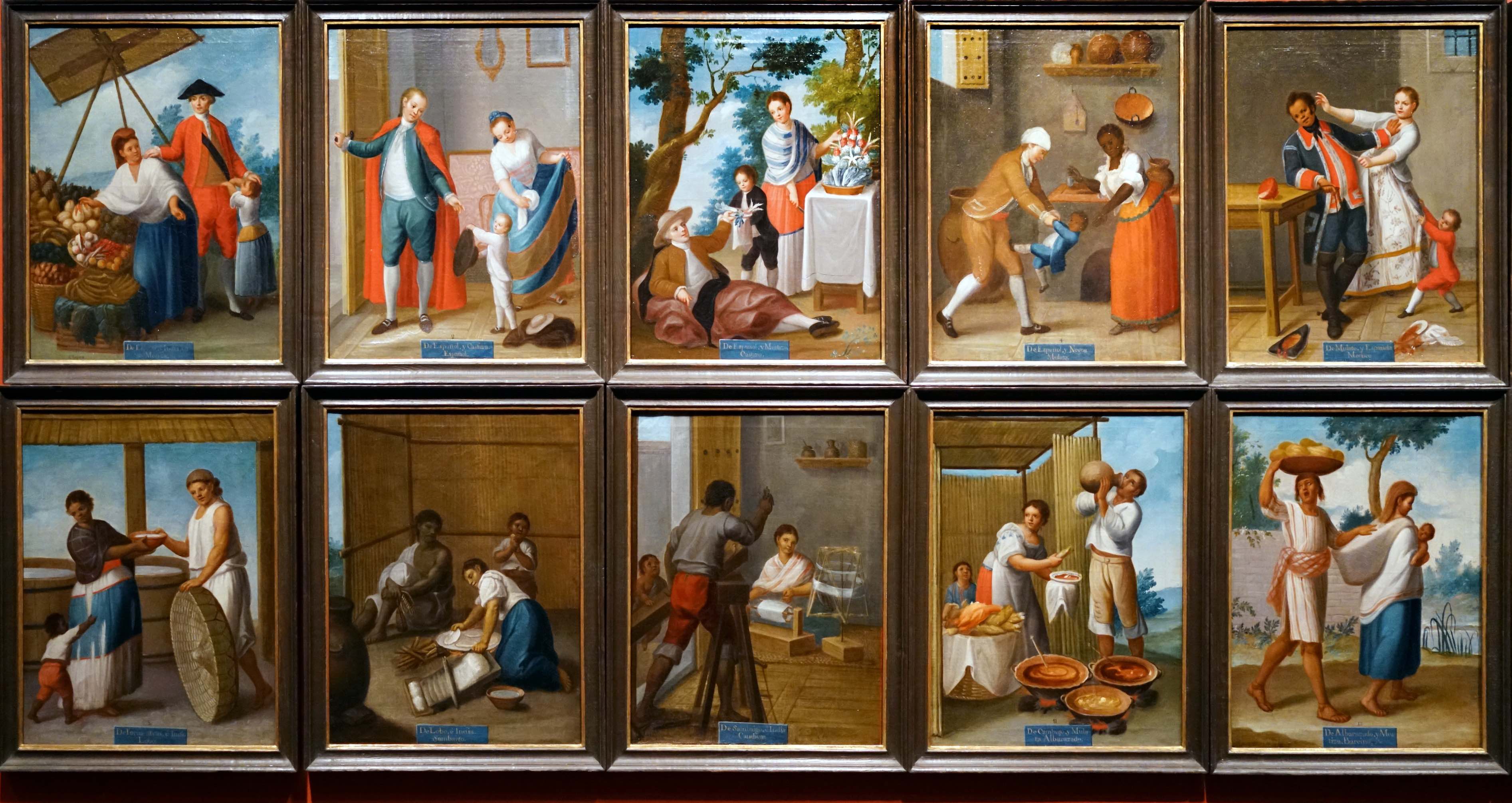 Nineteenth-century costumbrista painting borrows certain tropes from eighteenth-century casta painting. Casta paintings were a unique genre in colonial Mexico and Peru that represented racially mixed families in a set of 14 to 16 canvases. Each canvas depicted a father and mother of different races, and one to two of their children, and included a label that described the figures (for example, De Espanol, e India, nace Mestiza — From a Spaniard and Indian, a Mestiza is born — Mestiza refers to a child of Spanish and Amerindian parents).

As art historian Ilona Katzew demonstrates, casta paintings followed the Enlightenment trend of classifying and categorizing social and racial types, but also reaffirmed a social hierarchy in colonial Spanish America that privileged white Europeans.[1] In general, the more “white” a family was, the higher they were placed on the socio-racial hierarchical ladder. Oftentimes what distinguished racial types from one another was not solely skin color, but rather clothing, accessories, and setting, which alluded to one’s occupation, wealth, and status. Since visual markers alone were insufficient to ensure proper classification, textual inscriptions provided necessary clarification as to the racial types represented.

Costumbrista paintings, like casta paintings, often portray social and racial popular types identifiable by occupation and family units, but instead of being separated into distinct canvases they are now united into a single composition. Both casta and costumbrista paintings also depict racialized social spaces, that is, settings where racial, social, and gender relationships were imagined and visualized. [2] These spaces serve to further locate the represented types in a hierarchical order.

Although in post-Independence Mexico the complex casta nomenclature was no longer legally valid (casta designations were banned in legal records in 1822), its classifications still resonated for individuals of mixed races who continued to exist and intermingle on a daily basis. Arrieta captured these ubiquitous interactions among Mexico’s diverse populace within his costumbrista paintings.

In La Sorpreza, racial mixes are no longer identifiable by inscriptions as in casta paintings, so costumbrista paintings like Arrieta’s provide other clues to indicate the various social and racial types in the scene. In fact, perhaps Arrieta’s “surprise” alludes to the unexpected racial mixtures present and the viewer’s invitation to identify them. He seems to purposefully play with and entice the viewer with his ambiguous title.

The focal point of Arrieta’s composition is the barefooted woman at the center who receives attention from both a small boy (her son?) who tugs at her dress and a man (a suitor? her husband?) who pulls her toward him. She is dressed simply in a white cotton dress; the blue rebozo (shawl) draped over her head draws attention to her face, which is shown in profile as she looks over her right shoulder. Her large, bare feet identify her as someone of the lower classes: perhaps a mestiza? Or cambuja? Or loba? [3]

It is possible that this painting displays a dispute between the man and the woman, as there appears to be a physical struggle between them. Another possibility is that of a social or racial dispute. The central grouping composed of a man, woman, and child, is akin to the family unit seen in casta painting. The central female figure in the blue rebozo may be arguing with the higher-class woman in an elegant black dress and parasol (presumably a criolla, a Spaniard born in the Americas), who glides along the left-hand side of the composition. Notice the way in which the women’s heads lean towards one another while their arms move in the opposite direction; even the curves of their bodies almost form parentheses around the action. As such, the mustached man is not the cause of the woman’s distress, instead he is attempting to assuage the altercation between the two women.

What about the dogs?

The two small dogs that play in the left foreground close to the criolla offer a subtle clue as to the possible outcome of the heated discussion between the women in the scene. Here, presumptions about racial differences are displaced from human beings to animals: the black dog tackles the weaker white dog, reminding the viewer of the stereotype that African and Indian races were thought to be subject to uncontrollable streaks of hostility and passion.

This bias was visualized during the colonial era when casta paintings occasionally featured African women acting out aggressively. This violent streak believed to be inherent in African behavior is shown in the fourth panel of Andrés de Islas’s 1774 casta series, De español y negra, nace mulata (From Spaniard and Black, a Mulatta is Born). Here the African mother is portrayed hitting her Spanish husband with a wooden cooking implement, while her mulata (progeny of a Spaniard and African) daughter (not unlike the small boy in Arrieta’s painting), tugs on her mother’s skirt begging her to stop. Another possible interpretation is that the owner of both the rather small, delicate dogs is the criolla, and that the black dog that tackles the white dog symbolizes the criolla and mestiza respectively, as reinforced by the color of their dresses. The placement of the black dog on top of the white dog perhaps suggests the criolla as victor. Regardless of the outcome, Arrieta’s imaginative composition invites multiple narratives, and in fact would have served as a conversation starter, displayed prominently in an elite family’s home.

Many patrons of costumbrista paintings were also avid art collectors who purchased a wide variety of luxurious objects, from Spanish Golden Age paintings and Dutch genre prints to rare porcelain from China. Interspersed among these highly prized artworks would have hung costumbrista paintings like Arrieta’s La Sorpreza. In addition to serving as entertainment, they would have highlighted the patron’s wealth and upper-class status, far removed from the lower racially-mixed types they depicted.

Reckoning with Mestizaje (from VISTAS, Visual Culture in Spanish America)