The Coatlicue sculpture in Mexico City’s National Museum of Anthropology is one of the most famous Mexica (Aztec) sculptures in existence (her name is pronounced “koh-at-lee-kway”). Standing over ten feet tall, the statue towers over onlookers as she leans toward them. With her arms bent and pulled up against her sides as if to strike, she is truly an imposing sight.

Numerous snakes appear to writhe across the sculpture’s surface. In fact, snakes form her entire skirt, as well as her belt and even her head. Coatlicue’s name literally means Snakes-Her-Skirt, so her clothing helps identify her. Her snake belt ties at the waist to keep a skull “buckle” in place. Her upper torso is exposed, and we can just make out her breasts and rolls in her abdomen. The rolls indicate she is a mother. A sizable necklace formed of hands and hearts largely obscures her breasts.

You might read elsewhere that Coatlicue was decapitated by her daughter or beheaded when her son was born from her severed neck (the idea has been adopted in part to explain this monumental sculpture). However, the myth from which this story derives does not actually state that Coatlicue suffered this fate. For this reason, it is useful to review the myth—one of the most important for the Aztecs.

The primary myth in which Coatlicue is involved recounts the birth of the Aztec patron deity, Huitzilopochtli (pronounced “wheat-zil-oh-poach-lee”). This myth was recorded in the later sixteenth century after the Spanish Conquest of 1521. The main source from which we learn about it is the General History of the Things of New Spain, also called The Florentine Codex (written 1575–77 and compiled by the Franciscan friar Bernardino de Sahagún, Indigenous authors and artists, and Indigenous informants). [1] Illustration of the Battle of Coatepec from Bernardino de Sahagún, General History of the Things of New Spain (The Florentine Codex), 1575–77, volume 1, page 420 (Library of Congress, World Digital Library)

One day Coatlicue, an earth goddess, was sweeping atop Coatepec (or Snake Mountain), when a feather fell into her apron. At that moment, she immaculately conceived a son, whose name was Huitzilopochtli (a sun and warrior god). Upon hearing that her mother was pregnant, Coyolxauhqui (or Bells-Her-Cheeks, pronounced “coy-al-shauw-kee”) became enraged. She rallied her 400 brothers, the Centzonhuitznahua, to storm Snake Mountain and kill their mother.

One of the brothers decided to warn Coatlicue. Upon hearing of this impending murder, Coatlicue became understandably afraid. But Huitzilopochtli comforted her, telling her not to worry. At the moment Coyolxauhqui approached her mother, Huitzilopochtli was born, fully grown and armed. He sliced off his sister’s head, and threw her body off the mountain. As she fell, her body broke apart until it came to rest at the bottom of Snake Mountain.

But what became of Coatlicue, the mother to the victorious Huitzilopochtli and the defeated Coyolxauhqui? The myth does not mention her decapitation and dismemberment (only her daughter’s), so why would this famous sculpture display her in this manner?

Why was Coatlicue decapitated?

More recently, a new interpretation has been offered for Coatlicue’s appearance that is based on another myth (recounted in different Spanish Colonial source) concerning the beginning of 5th era, or 5th sun. The Aztecs believed that there were four earlier suns (or eras) prior to the one in which we currently live. The myth notes that several female deities (perhaps Coatlicue among them), sacrificed themselves to put the sun in motion, effectively allowing time itself to continue. They were responsible for preserving the cosmos by offering their own lives. After this point, these female deities were then symbolized by their skirts (called mantas), which could explain the careful attention paid to Coatlicue’s snaky skirt. It functions as a reminder of her name—Snakes-Her-Skirt—as well as symbolizing her as a deity and reminding the viewer of her past deeds. This might also explain why—in place of her head—we have two snakes rising from her severed neck. They represent streaming blood, which was a precious liquid connoting fertility. With her willing sacrifice, Coatlicue enabled life to continue. Some details on the sculpture support this newer and enticing interpretation. There is a date glyph, 12 Reed, inscribed on the sculpture’s back which might relate to the beginning of a new solar era. [2] Archaeologists have also found the remains of several other monumental sculptures of female deities similar to Coatlicue, but each display different skirts. One of these sculptures stands near to Coatlicue in the Anthropology Museum, but hearts adorn her skirt instead of snakes (you can see this sculpture in the photo at the top of the essay).

Despite her fame in one of the most important Aztec myths concerning their patron god, Coatlicue did not have numerous stories recorded about her during the sixteenth century (that we know of at least). Few surviving Aztec objects display her. However, another stone sculpture in the National Museum of Anthropology—on a much smaller scale—shows Coatlicue with her head intact. We can identify her by her snaky skirt. Her face is partly skeletonized and de-fleshed. Her nose is missing, revealing the cavity. Yet she still has flesh on her lips, which are open to reveal bared teeth. Even with her head, this version of Coatlicue still seems intimidating to us today. But was she perceived as terrifying by the Aztecs or is this only a twenty-first century impression of her?

Prior to the Spanish Conquest, Coatlicue related to other female earth deities, such as Toci (Our Grandmother). Several sixteenth-century Spanish Colonial sources mention that Coatlicue belonged to a class of deities known as tzitzimime (deities related to the stars), who were considered terrifying and dangerous. For example, outside of the 360-days that formed the agricultural calendar (called the year count or xiuhpohualli), there were five extra “nameless” days. The Aztecs believed this was an ominous time when bad things could happen. The tzitzimime, for instance, could descend to the earth’s surface and eat people or at least wreak havoc, causing instability and fear. In Spanish Colonial chronicles, the tzitzimime are depicted with skeletonized faces and monster claws—similar to what we see in Coatlicue sculptures discussed here. These sources also call the tzitzimime demons or devils.

For all their ferociousness, however, the tzitzimime also had positive associations. Ironically, this group of deities were patrons of midwives, or women responsible for helping mothers with their babies. People also invoked them for medical help and they had associations with fertility. For these reasons, they had a more ambivalent role than as simply good or bad deities, and so they were both respected and feared.

After the Spanish Conquest, the monumental Coatlicue sculpture was buried because it was considered an inappropriate pagan idol by Spanish Christian invaders. After languishing in obscurity for more than 200 years, it was rediscovered in 1790. Antonio León y Gama, a curious historian, astronomer, and intellectual living in Mexico City at the time, drew illustrations of the sculpture and offered his interpretation of who it displayed (he claimed it was Teoyaomiqui). Not long after it was found, however, Coatlicue was reburied—she was considered too frightening and pagan. Eventually, she was uncovered again in the twentieth century, becoming one of the crowning objects of the National Anthropology Museum and a famous representative of Aztec artistic achievements in stone sculpture.

[1] There are several other myths that make mention of Coatlicue, but the most frequently cited myth is the one in the Florentine Codex discussed in the text. [2] See Cecelia Klein, “A New Interpretation of the Aztec Statue Called Coatlicue, ‘Snakes-Her-Skirt’,” Ethnohistory 55, no. 2 (Spring 2008): pp. 229–250. 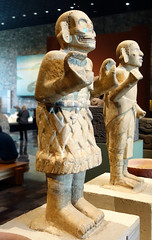 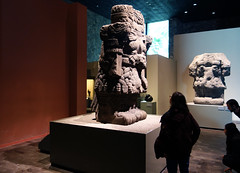 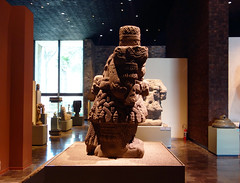 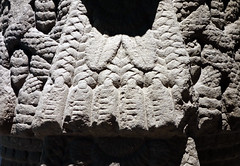 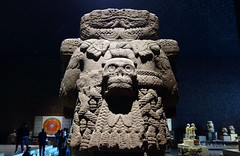