From the physical to spiritual world (the shaman) 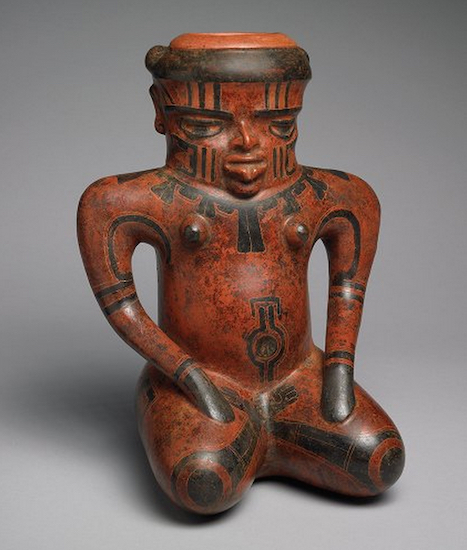 An important visual theme in many ancient American art styles is that of transformation: one thing changing into another. Often the physical change seen in the art is meant to convey a spiritual transmutation, as inhabitants of this physical world communicate with, and often temporarily become, the inhabitants of the spirit world. Communication with the spirit world is essential. The inhabitants of that world hold power over this one, and they can aid humans in making crops grow, healing the sick, or helping the dead pass into the afterlife. However, there is also a dark side to the spirit world and its inhabitants. Some spirit beings are malevolent, causing disease, crop failure, droughts, floods, and other disasters. In order to negotiate with the perilous spirit world, a person with special gifts and training must be able to travel there and represent their people.

The term “shaman” initially referred solely to the specific kinds of healers and holy people of Siberia (the word is Tungusk in origin), but today it is often used as a broad category designating ritual specialists who undergo spiritual transformations and trances that place them into communication with the spirit world, and allow them to journey into that world if the need arises.

Usually, if the local term for such a practitioner is known, that is what they are called in scholarly literature, but in the case of long-passed cultures with no written language, “shaman” is frequently the catch-all designation. Most shamans have spirit alter egos who help them in this world and in the spirit world, and these alter egos are usually animals. The qualities of particular animals, such as swiftness, strength, and heightened senses, all aid the shaman as they travel in the spirit world, where they may have to fight evil spirits or rival shamans as well as find and communicate with more benevolent forces.

The Doe Shaman (above) is such a figure. She is from the Greater Nicoya area, comprised of parts of modern-day Costa Rica and Nicaragua. Unlike Mesoamerica and the Central Andes, there was no empire-building in the area we now call Central America. Instead, small egalitarian bands and larger chiefdoms were the primary political units. A characteristic of such small societies was their desire to clearly distinguish themselves from their neighbors, with whom they often fought, competed for resources, married, and traded. A product of this competition was remarkable innovation in material culture styles, meant to create distinct wares that announce and confirm social identity. The red and black slip painting burnished to a high sheen and fine incised lines all characterize the particular local style (called Rosales Zoned Engraved) that the Doe Shaman’s people used. However, it is what the artistic style depicts that was of central importance.  What is slip? 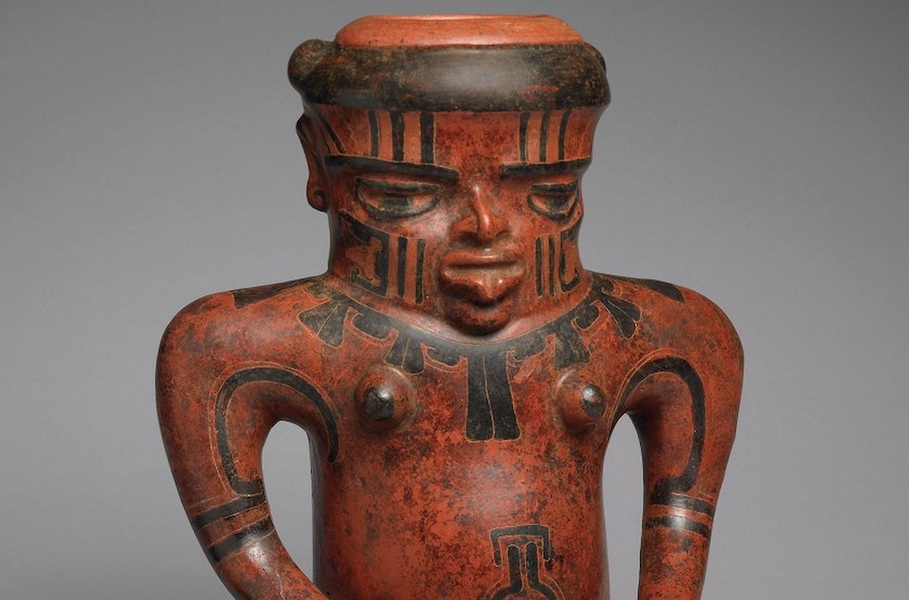 The Doe Shaman depicts a woman, identifiable by her protruding breasts and rounded, pregnant belly, seated with her legs crossed and her hands placed on her thighs. She wears a necklace, perhaps made of stone beads, around her neck, and her body is painted or tattooed with numerous swirling and straight lines. Her head is considerably larger in proportion to her body than a normal human’s would be, and her shoulders are exceptionally broad. The swirling forms that cross her body at the armpits, navel, and buttocks may reference the shapes modern shamans report seeing as they fall into trance and prepare to enter the spirit world.

She is seated in a cross-legged pose that is commonly used to show shamans in a trance state. Her crossed legs (below) are rendered in a combination of three-and two-dimensional forms: the thighs down to the knees are rounded, three-dimensional forms, while the lower legs and feet are painted on the surface of the thighs they cross. The ankles cross between the legs, both marking and hiding her genital area. In general her body is depicted in an abstract manner, with rounded forms and a lack of interest in musculature. 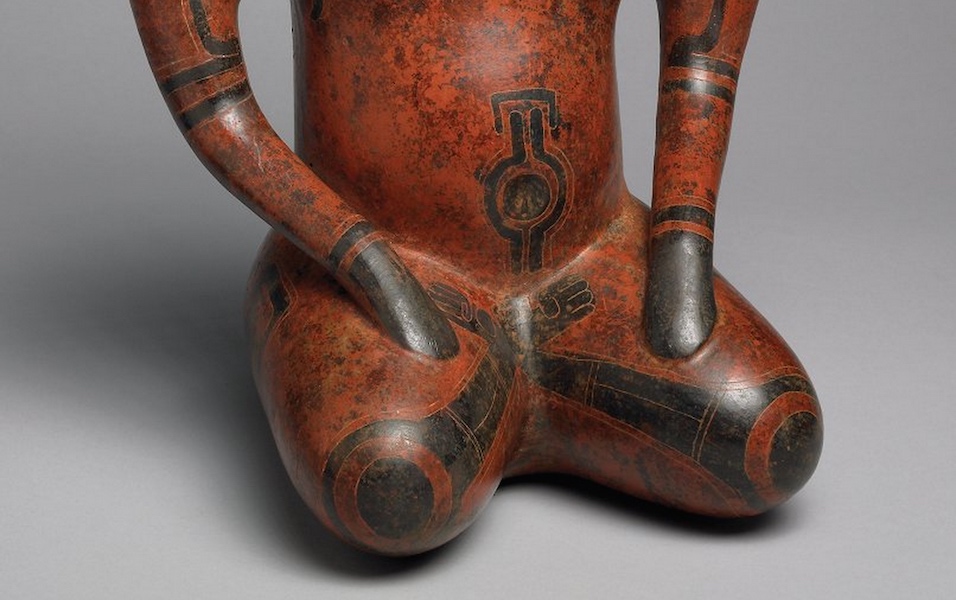 but also a white-tailed deer…

Upon closer inspection, it also becomes clear that this woman does not just have human features. Instead she is being portrayed as someone in between the human and animal worlds: a shaman transforming into her animal self in preparation for a journey to the spirit world. Her features are a mixture of those of a human and those of a white-tailed deer (Odocoileus virginianus).

Several parts of her body reveal this subtle transformation, most especially the knobby protrusions on the sides of her head, the split in her lower lip, and the fact that her hands lack fingers and instead look like hooves. The protrusions on her head mimic the pedicels, or antler stumps, of deer, from which antlers grow and then are shed. The pedicels reference the regenerative nature of antlers, endowing the shaman with their property of death and rebirth. 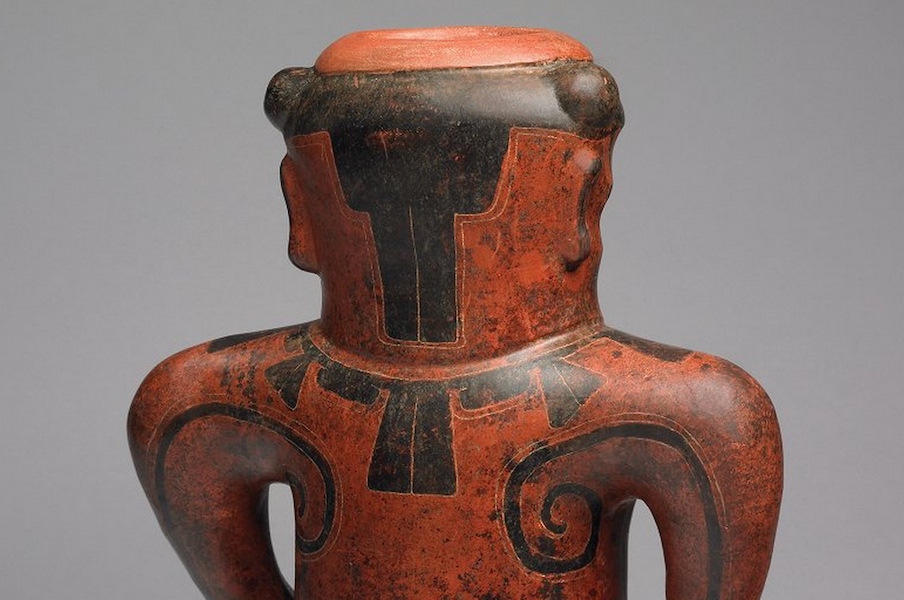 Her split lower lip, viewed against her protruding chin, looks somewhat like a deer’s sensitive muzzle. Her hoof-hands, viewed in contrast to her nearby human feet, emphasize her ability to transform into the deer in her travels to the spirit world, and to use the swiftness of the deer in her dangerous journey. This beautifully-made piece would have been placed in a grave, where the vessel would embody the shaman’s power that would help the deceased make their safe passage from life to death, being reborn into the spirit world through the regenerative and maternal power of the shaman as well as her protection in the journey from life to afterlife.¹