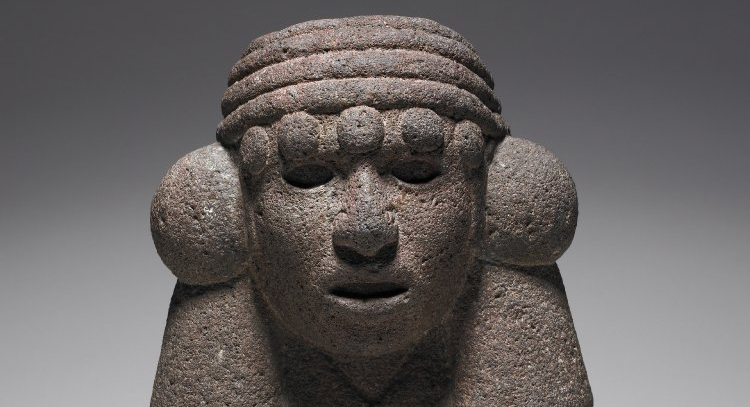 This stone sculpture represents Chalchiuhtlicue, the Mexica water goddess. Chalchiuhtlicue means “she of the jade skirt” in Nahuatl, the language spoken by the Mexica.* She was associated with the spring water, rivers and lakes, and also with birth. According to an Mexica creation myth there were four suns (or worlds) before the present one. Chalchiuhtlicue presided over the fourth one, which was destroyed by floods and its people turned into fishes.

Female figurines, kneeling or standing, are a recurring theme in Mexica sculpture. Most of them have distinctive characteristics that identify them as fertility goddesses. They are always represented as young women and they wear a variety of headdresses. In some cases, like in this example, their hair is arranged in two large tassels on both sides of the head. Other fertility deities, such as the maize goddesses, wear a large rectangular headdress made of rigid bark paper and ornamented with rosettes. Here, Chalchiuhtlicue wears the traditional shawl (quechquemitl), also trimmed with tassels, over a long skirt. Her eyes were probably made of shell, like in many other Mexica sculptures.

This piece was acquired by William Bullock, a famous collector of Mexican antiquities, in 1823 and exhibited at the Egyptian Hall, in Piccadilly.

The image of the goddess Chalchiuhtlicue figures prominently in the codices as a beautiful young woman representing the purity and preciousness of water. She is invariably painted blue, signaling her role in mythology as the wife, mother or sister of Tlaloc, the Rain God. She is associated with spring water used to irrigate the fields and, as the patron saint of fishermen, with lakes and rivers. She also plays an important role in birth ceremonies. Each figure wears a headband adorned with large ear tassels, as well as a tasseledquechquemitl (shoulder cape) over a long skirt.

*The people and culture we know as “Aztec” referred to themselves as the Mexica (pronounced Me-shee-ka).

M. E. Miller and K. Taube, An illustrated dictionary of the Gods and Symbols of Ancient Mexico and the Maya  (London, Thames and Hudson, 1997).