Pontiac, for instance, was an 18th century Ottawa chief (also called Obwandiyag), who fought against the British in the Great Lakes region. The word “moose,” first used in English in the early seventeenth century during colonization, comes from Algonquian languages. 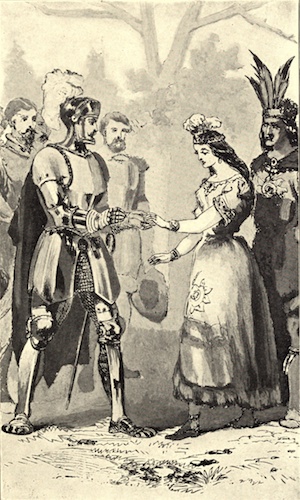 Stereotypes persist when discussing Native American arts and cultures, and sadly many people remain unaware of the complicated and fascinating histories of Native peoples and their art. Too many people still imagine a warrior or chief on horseback wearing a feathered headdress, or a beautiful young “princess” in an animal hide dress (what we now call the Indian Princess). Popular culture and movies perpetuate these images, and homogenize the incredible diversity of Native groups across North America. There are too many different languages, cultural traditions, cosmologies, and ritual practices to adequately make broad statements about the cultures and arts of the Indigenous peoples of what is now the United States and Canada.

In the past, the term “primitive” has been used to describe the art of Native tribes and First Nations. This term is deeply problematic—and reveals the distorted lens of colonialism through which these groups have been seen and misunderstood. After contact, Europeans and Euro-Americans often conceived of the Amerindian peoples of North America as noble savages (a primitive, uncivilized, and romanticized “Other”). This legacy has affected the reception and appreciation of Native arts, which is why much of it was initially collected by anthropological (rather than art) museums. Many people viewed Native objects as curiosities or as specimens of “dying” cultures—which in part explains why many objects were stolen or otherwise acquired without approval of Native peoples. Many sacred objects, for example, were removed and put on display for non-Native audiences. While much has changed, this legacy lives on, and it is important to be aware of and overcome the many stereotypes and biases that persist from prior centuries.

One significant step that has been taken to correct some of this colonial legacy has been NAGPRA, or the Native American Graves Protection and Repatriation Act of 1992. This is a U.S. federal law that dictates that “human remains, funerary objects, sacred objects, and objects of cultural patrimony, referred to collectively in the statute as cultural items” be returned to tribes if they can demonstrate “lineal descent or cultural affiliation.” Many museums in the U.S. have been actively trying to repatriate items and human remains. For example, in 2011, a museum returned a wooden box drum, a hide robe, wooden masks, a headdress, a rattle, and a pipe to the Tlingít T’akdeintaan Clan of Hoonah, Alaska. These objects were purchased in 1924 for $500.

In the 19th century, many groups were violently forced from their ancestral homelands onto reservations. This is an important factor to remember when reading the essays and watching the videos in this section because the art changes—sometimes very dramatically—in response to these upheavals. You might read elsewhere that objects created after these transformations are somehow less authentic because of the influence of European or Euro-American materials and subjects on Native art. However, it is crucial that we do not view those artworks as somehow less culturally valuable simply because Native men and women responded to new and sometimes radically changed circumstances.

Many twentieth and twenty-first century artists, including Oscar Howe (Yanktonai Sioux), Alex Janvier (Chipewyan [Dene]) and Robert Davidson (Haida), don’t consider themselves to work outside of so-called “traditional arts.” In 1958, Howe even wrote a famous letter commenting on his methods when his work was denounced by Philbrook Indian Art Annual Jurors as not being “authentic” Native art:

Who ever said that my paintings are not in the traditional Indian style has poor knowledge of Indian art indeed. There is much more to Indian Art than pretty, stylized pictures. There was also power and strength and individualism (emotional and intellectual insight) in the old Indian paintings. Every bit in my paintings is a true, studied fact of Indian paintings. Are we to be held back forever with one phase of Indian painting, with no right for individualism, dictated to as the Indian has always been, put on reservations and treated like a child, and only the White Man knows what is best for him? Now, even in Art, ‘You little child do what we think is best for you, nothing different.” Well, I am not going to stand for it. Indian Art can compete with any Art in the world, but not as a suppressed Art…. 1

The word Indian is considered offensive to many peoples. The term derives from the Indies, and was coined after Christopher Columbus bumped into the Caribbean islands in 1492, believing, mistakenly, that he had found India. Other terms are equally problematic or generic. You might encounter many different terms to describe the peoples in North America, such as Native American, American Indian, Amerindian, Aboriginal, Native, Indigenous, First Nations, and First Peoples.

Native American is used here because people are most familiar with this term, yet we must be aware of the problems it raises. The term applies to peoples throughout the Americas, and the Native peoples of North America, from Panama to Alaska and northern Canada, are incredibly diverse. It is therefore important to represent individual cultures as much as we possibly can. The essays here use specific tribal and First Nations names so as not to homogenize or lump peoples together. On Smarthistory, the artworks listed under Native American Art are only those from the United States and Canada, while those in Mexico and Central America are located in other sections.

You might also encounter words like tribes, clans, or bands in relation to the social groups of different Native communities. The United States government refers to an Indigenous group as a “tribe,” while the Canadian government uses the term “ban.” Many communities in Canada prefer the term “nation.”

In order to be legally classified as an Indigenous person in the United States and Canada, an individual must be officially listed as belonging to a specific tribe or band. This issue of identity is obviously a sensitive one, and serves as a reminder of the continuing impact of colonial policy. Many contemporary artists, including James Luna (Pooyukitchum/Luiseño) and Jaune Quick-to-See-Smith (from the Confederated Salish and Kootenai Tribes of the Flathead Indian Nation), address the problem of who gets to decide who or what an Indian is in their work.

Luna’s Artifact Piece (1987) and Take a Picture with a Real Indian (1993) both confront issues of identity and stereotypes of Native peoples. In Artifact Piece, Luna placed himself into a glass vitrine (like the ones we often see in museums) as if he were a static artifact, a relic of the past, accompanied by personal items like pictures of his family. In Take a Picture with a Real Indian, Luna asks his audience to come take a picture with him. He changes clothes three times. He wears a loincloth, then a loincloth with a feather and a bone breastplate, and then what we might call “street clothes.” Most people choose to take a picture with him in the former two, and so Luna draws attention to the problematic idea that somehow he is less authentically Native when dressed in jeans and a t-shirt.

Even the naming conventions applied to peoples need to be revisited. In the past, the Navajo term “Anasazi” was used to name the ancestors of modern-day Puebloans. Today, “Ancestral Puebloans” is considered more acceptable. Likewise, “Eskimo” designated peoples in the Arctic region, but this word has fallen out of favor because it homogenizes the First Nations in this area. In general, it is always preferable to use a tribe or Nation’s specific name when possible, and to do so in its own language.

Interview with James Luna for the Smithsonian

The National Museum of the American Indian

NAGPRA explained by the NMAI