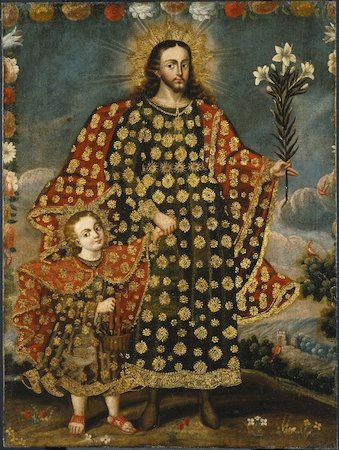 From comic relief to a starring role

St. Joseph holds the hand of his foster son, the miraculous Christ Child. The gold-adorned halos of the two figures radiate light into the lush landscape around them. Joseph’s wife, the Virgin Mary, is nowhere to be seen, focusing our attention on Joseph’s paternal role. Paintings that celebrated St. Joseph as a youthful, caring father skyrocketed to popularity during the 16th and 17th centuries, both in Spain and throughout the Spanish Empire. In earlier European Catholicism, Joseph was considered a peripheral saint (he is only mentioned in the New Testament eight times). In paintings from this earlier period, Joseph was often depicted as an aging man humorously dozing off in a corner at the Nativity.  St. Joseph went from comic relief to a starring role in Hispanic devotions by the 17th century. This particular painting of the lively, vigorous St. Joseph is from the Andean region of the Viceroyalty of Peru. The Viceroyalty of Peru (1542-1824) was one of two Spanish Viceroyalties, or administrative districts, in the Americas, which eventually encompassed much of South America.  Joseph remains one of the patron saints of Peru to this day.

Why the newfound popularity?

St. Joseph was a figure to whom devotees could relate.  Just as the Virgin Mary was a model of the ideal mother and woman, St. Joseph could encourage male believers to emulate his example as a devoted father and husband. Sixteenth-century Italian theologian Isidoro de Isolani argued that Joseph was vital for his role as the honorable head of the Holy Family.  St. Joseph was also the patron saint of marriage. In Lima, Peru, praying to a statue of St. Joseph was said to “cure” jealous husbands and restore marital harmony. Joseph’s role as model patriarch was particularly important to the Catholic Church, as Christian marriage was a means of structuring the recently converted indigenous populations of the Spanish Americas. By encouraging marriage between Spanish and Indigenous elites, the Spanish crown could consolidate its power. Furthermore, they could attempt to strengthen Christian devotion among the indigenous peoples by promoting the Christian ritual of marriage and outlawing indigenous marriage rites.

This image of St. Joseph differs from saints’ images elsewhere in the Spanish Empire.  It exhibits several of the distinctive features of the regional “Cusco School” of painting (Cusco is the name of this region—in the Central Peruvian Andes of South America).  The Cuzco-School style developed as indigenous Andean artists adopted techniques imported by artists from Spain and Flanders. For example, they embraced the Flemish interest in detailed landscapes and atmospheric perspective, seen here in the use of light blue tones to suggest distant hills.  Cuzqueño artists also incorporated local details, such as regional flora and tropical birds. 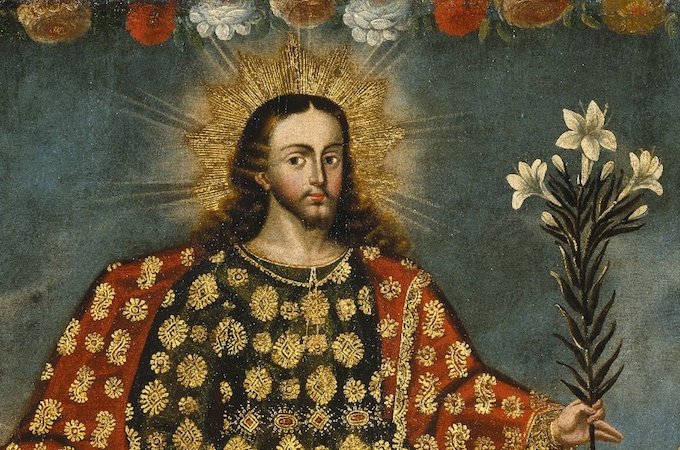 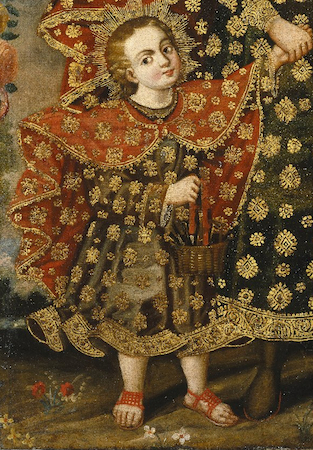 Fabrics received particular attention in Cusco School paintings, and are often adorned with elaborate patterns and gold leaf (a thin layer of gold applied to the surface of painting). In this example, the billowing robes of Joseph and the Christ Child are depicted with incredible intricacy. Gold stamping is present throughout the costumes’ brocaded designs, their cuffs, their hems, and their lace trim.

The Inka people of pre-conquest Peru highly valued textiles, and the prestige bestowed by fabrics continued long after the Spanish colonized the region. Cumbi cloth, the highest-quality fabric produced in Peru, was among the most expensive commodities available to a colonial Peruvian individual during the 17th and 18th centuries. A painting such as St. Joseph and the Christ Child, on the other hand, would have cost only one-fifth the price of a mantle of the finest cumbi cloth. Painting could, however,  evoke the multicolored lavishness of a textile—and some of its status—but at a much lower cost. 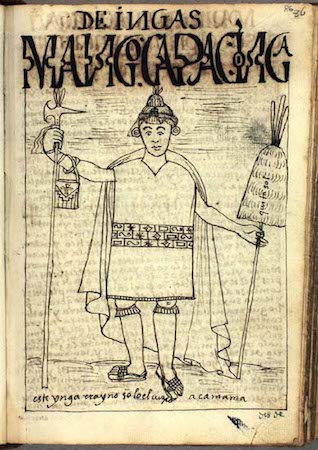 In addition to the opulent textiles, other aspects of the painting infuse the Euro-Christian figures with Andean elements. The bright red sandals worn by the Christ Child, for example, are the same style as those worn by the indigenous Inkan elite. Images of Inkan leaders sporting similar footwear appear in the manuscript by Felipe Guaman Poma de Ayala, The First New Chronicle and Good Government (El primer nueva corónica y buen gobierno, 1615) (a historical account of the Andes and a critique of Spanish colonial rule sent to the Spanish king).

In the eyes of a colonial Cusqueño (an inhabitant of Cusco) then, this Christ Child might evoke both the Sapa Inka, or supreme Inkan ruler, as well as the Christian savior.  Both the Sapa Inka and Christ were associated with solar symbolism: the Sapa Inka was the son of the sun god, and Christ was considered the lux mundi or “light of the world.”  In St. Joseph and the Christ Child, both figures have detailed sunburst halos and gleaming gold robes, a reminder of this solar association.

Colonial officials hoped to exploit the similarity between the two figures by substituting the figure of Christ for revered Inkan deities. For example, official colonial observances of Inti Raymi, the festival of the sun, celebrated Christ’s defeat of the Inka. However, paintings like this one show that the two visual languages could coexist, in spite of official events that championed the Christian over the Inka. Descendants of Indigenous elites proudly displayed paintings of their Inkan forebears alongside Christian images as a means to highlight their noble genealogy. The painting St. Joseph and the Christ Child likely hung in a domestic setting, allowing the owners to pray to St. Joseph for marital harmony within the comforts of their own sitting room or bedchamber.

This painting at the Brooklyn Museum