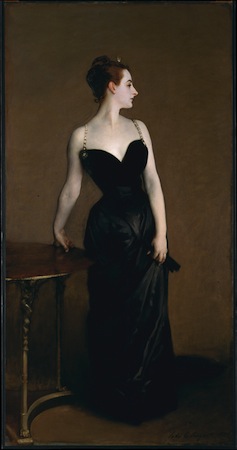 Madame X is perhaps Sargent’s most infamous painting. When it debuted at the Paris Salon of 1884, critics lashed out at the artist for what they deemed a scandalous, immoral image. While the title omitted the sitter’s name, the public immediately recognized her as the notorious Parisian beauty Virginie Gautreau. The gown’s plunging neckline was considered too provocative for the times, and its right strap – which originally was shown to have slipped off the shoulder – ultimately led to Sargent repainting it in its proper position to appease outraged viewers and Gautreau’s own family.

Madame X mixes the Gilded Age penchant for portraying status and wealth in portraiture with a daring seductive aesthetic. For all that it shocked onlookers, however, much of its details were based in older classical traditions: Madame Gautreau’s hairstyle is based on one of ancient Greece, and she wears a diamond crescent that is the symbol of the huntress Diana.

John Singer Sargent intended the portrait to establish his reputation, and despite the notoriety it attracted, the work did succeed: Madame X advertized his ability to paint his sitters in the most flattering and fashionable manner possible, and led to a healthy career in Britain and great esteem in America from the late 1880s onward. Though he was born oversees, traveled worldwide, and spent much of his life abroad, Sargent’s career truly matured in his family’s native land, and he always considered himself an American artist. He toiled for nearly three decades on a mural commission for the Boston Public Library, he frequently painted fellow American expatriates, and in 1906 he was appointed full academician of the National Academy of Design in New York. 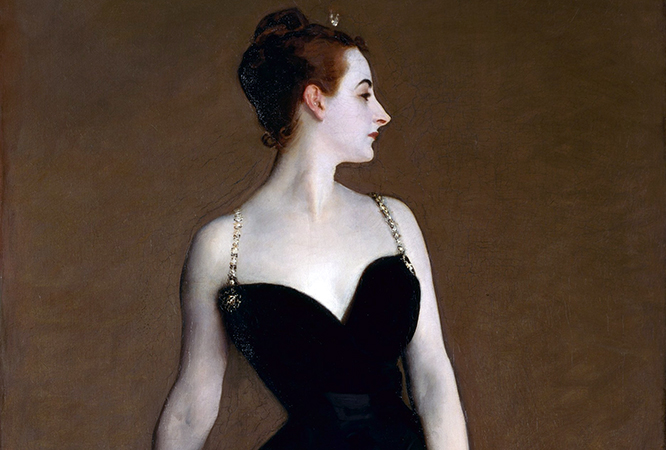 In 1916 the Metropolitan Museum of Art bought Madame X, which Sargent considered “the best thing I have done.” The painting—which debuted to severe disparagement but is today treasured as a masterpiece beloved in the history of Western art—is but one example of an artwork that gradually evolved from epitomizing the condemned to the celebrated. Much of a work’s initial reception is based upon society’s tastes, standards of etiquette, and values of the era, and as these attitudes shift over the decades, the public may begin to look at older paintings with new eyes. Sargent’s Madame X is perhaps a more dramatic example of this trend, yet it poses intriguing questions about what really defines an artwork’s popularity, legacy, and fame.

About Madame X on The Heilbrunn Timeline of Art History