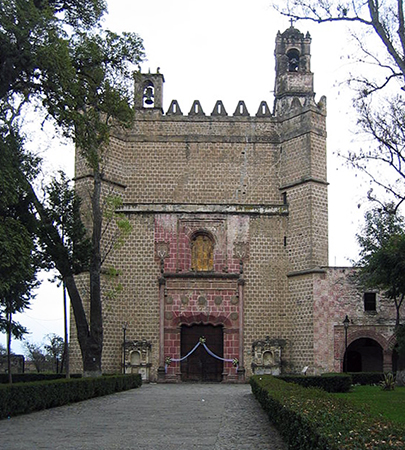 In 1994, UNESCO (The United Nations Educational, Scientific and Cultural Organization) named the earliest sixteenth-century Mexican monasteries found on the slopes of the Popocatepetl volcano in central Mexico a World Heritage Site. These fourteen monasteries define the history of Christian evangelization for much of Mexico’s colonial period (1521–1821). One of these monasteries is the Franciscan mission of St. Michael the Archangel in Huejotzingo, twenty-three miles outside the city of Puebla.

When building the mission of Huejotzingo, the friar-architects likely envisioned themselves constructing a new temple of Jerusalem, an expression of the westward expansion of Christianity. 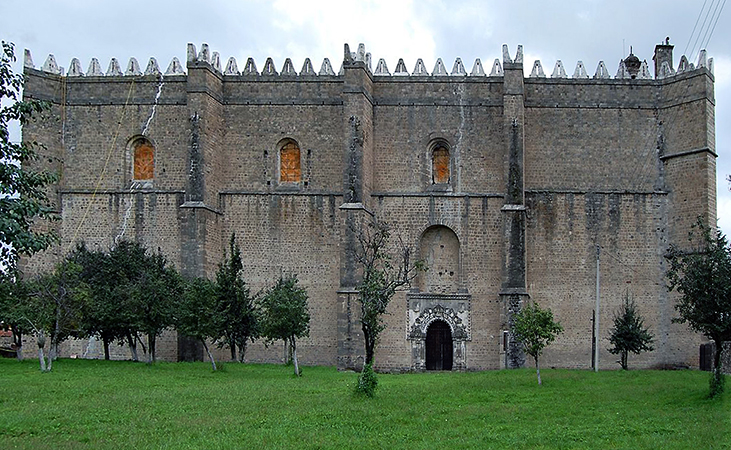 The monasteries constructed between the 1520s and 1550s may have also been designed with a second purpose in mind, to defend monks from attacks by unconverted local and regional populations. However the fortress-like appearance of these missions is now generally accepted as reflecting earlier representations of the temple of Jerusalem in western art. 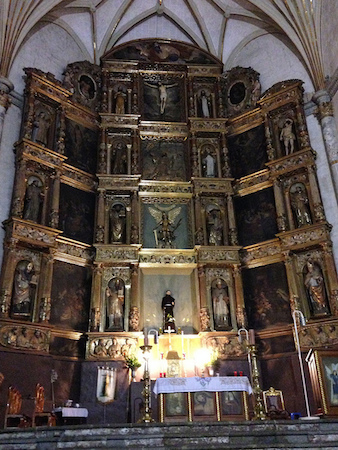 The Franciscan monastery of Huejotzingo is a landmark in the development of sixteenth-century art in central Mexico. Huejotzingo’s impressive church façade displays a variety of Spanish architectural styles while the church as a whole contains a consistent theological program. Most prominent is the church’s retablo (altarpiece). It was painted by the Flemish artist Simon Pereyns and is located in the mission church. It displays aspects of Mannerism, a style that remained influential in colonial México for almost a hundred years.

Among the church’s most important architectural features are a group of four open-air chapels known as posas located in each of the corners of the monastery’s atrium. They are among the best preserved in all of Mexico and exemplify the practice of outdoor spiritual teaching that was so much a part of the process of colonization. In the Franciscan mission at Huejotzingo, a new visual language representing spiritual conversion is evident when the visitor crosses the threshold of the posas. 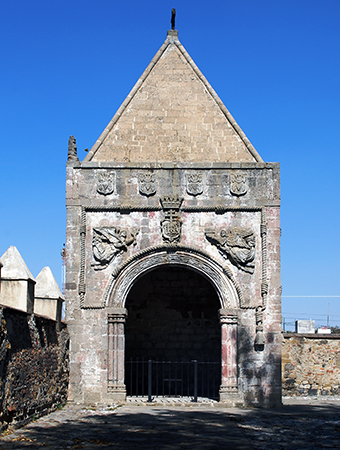 The posas are vaulted in the interior, capped by a pyramid-like structure, and adorned with crosses on their pinnacles. The structures are accessible through arches on two adjacent sides to allow processions to move through unimpeded. Each posa measures seventeen feet across and are twice as high. They are constructed of stone, like the rest of Huejotzingo. However, their historical significance is principally the result of how Mesoamerican religious practices were implemented here for the purpose of mass spiritual conquest.

The position of the chapels in the atrium’s corners allowed for a large number of people to participate in dramatic daily liturgical processions. The interiors of the posas were decorated with frescoes that included themes of the Immaculate Conception of the Virgin Mary and the Last Judgment. These images would have intensified the emotional effects of spiritual salvation and condemnation for recent indigenous converts. Posas were most likely adaptations of tremezzi, which date back to fourteenth-century Italian religious architecture. A tremezzo was a bridge and porch-like form that spanned across a church nave. Its purpose was to shelter altars, and was used as a stage for preaching and dramatic enactments. In addition to any possible European architectural forerunners, one must also consider Mesoamerican precedents. For instance, posas resemble callis (“house” in Nahuatl, an indigenous language of Central Mexico), which were rectangular and open on one side, and Aztec temple houses, which were erected atop pyramids (teocalli). 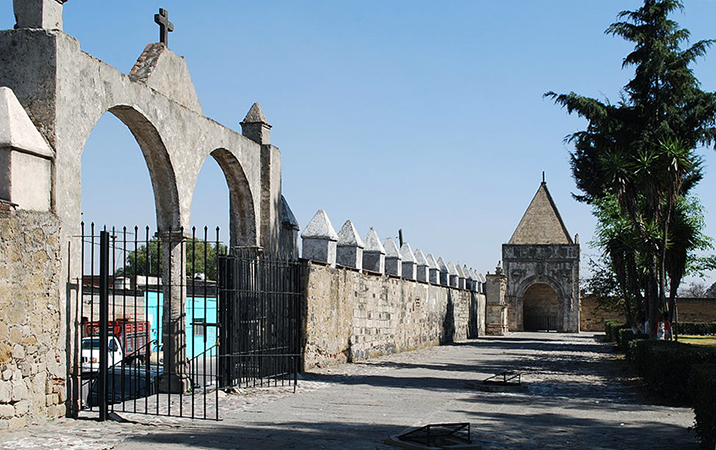 Posas allowed for conversion to take place outside the main church. While this may have been done for practical purposes, pre-Columbian Mexican spiritual ceremonies also took place out of doors. Worshippers were accustomed to gathering in open courtyards to listen to priest-rulers. Another example of the fusion of Christian and indigenous spiritual meaning is presented by the pyramidal shape of the chapels’ roofs, which were surmounted by highly ornate crosses. Crosses were important symbols for water, fertility, and sustenance prior to the arrival of the Spaniards. Non-Christian, pre-Columbian crosses were often created out of trees and represented the Tree of Life in various rituals. In mission spaces such as Huejotzingo, crosses became a powerful symbol for the source of spiritual life shared by Europeans and indigenous peoples alike. They were placed in the center of monastery atriums as a symbol of the Christian and indigenous axis mundis (world axis). The crosses that topped the posas, of which only the example from below survives, were modeled with similar didactic functions as the large atrium crosses that decorated most sixteenth-century missions in this region. They were carved with a fusion of Mesoamerican and European symbols, offering natives an opportunity to learn about Christ’s life, death, and resurrection through familiar regional motifs. 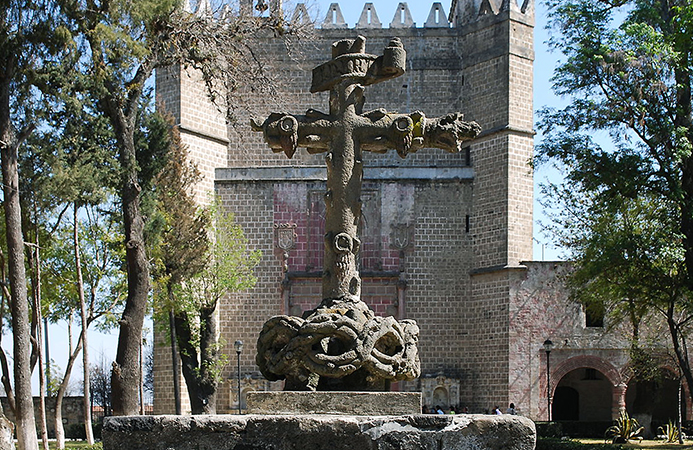 Huejotzingo’s Posa Cross has a serpentine base that resembles Christ’s crown of thorns, and the wounds of Christ’s Passion (the stigmata) are shown through carved circles that drip blood in the form of grape clusters (or, perhaps maize cobs, if one considers a possible indigenous meaning). The stigmata were not only representations of Christ’s Passion, but in this context, also the miraculous stigmatization of St. Francis, the patron saint of the Franciscan order. Above the open sides of the posas, which are framed by a relief of the order’s knotted rope cord, appear four Franciscan Order shields, containing five grape clusters, reiterating the stigmata iconography (wine from grapes miraculously becomes the blood of Christ during the Eucharist).

On every arch, two apocalyptic angels hover within an alfiz. This is a term borrowed from Mozarabic architecture and it is used to describe the relief details that surround the perimeters of an arch. In Huejotzingo’s posas, the alfiz is carved to resemble a knotted Franciscan cord. Each angel holds a different Instrument of the Passion (or the Arma Christi), announcing the sacred battle against pagan forces. Above the keystone, we see an emblem of the Virgin Mary capped by a crowned cross. The posa carvings communicate the unifying suffering of Saint Francis and Christ. 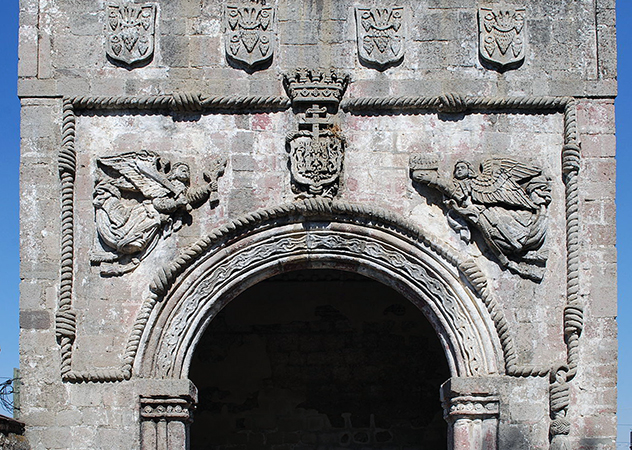 The carving style of the dynamic hovering angels is at times described as Romanesque, Gothic, Tequitqui, or Indo-Christian.¹  Many sculpted and frescoed details from this period can be traced to Northern European prints while the overall theological program was most likely envisioned by people like friar Pedro de Gante whose indigenous art school in Mexico City trained the artists that created this and other important sixteenth-century monuments. 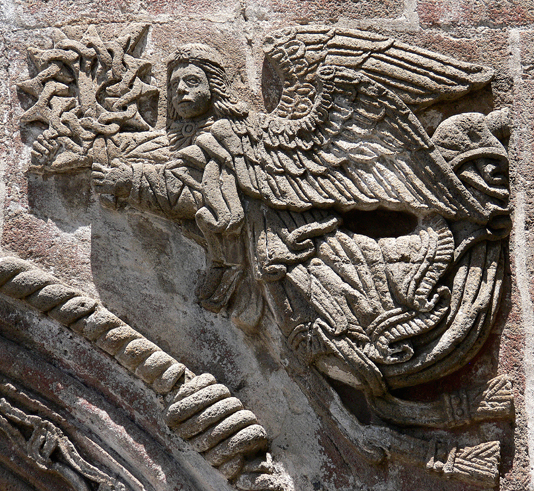 Huejotzingo’s posas constitute a blend of Christian and indigenous Mesoamerican symbols that established a message of evangelization that achieved new levels of success.

1. “Tequitqui is a term “meaning ‘laborer’ or ‘tribute payer’ in Nahuatl, used by 20th-century scholars to describe the sculpture and architectural decoration created in New Spain in the sixteenth century…” Leibsohn, Dana, Barbara Mundy, “Vistas: Visual Culture in Spanish America, 1520-1820.”

The sixteenth century: Age of the conventos